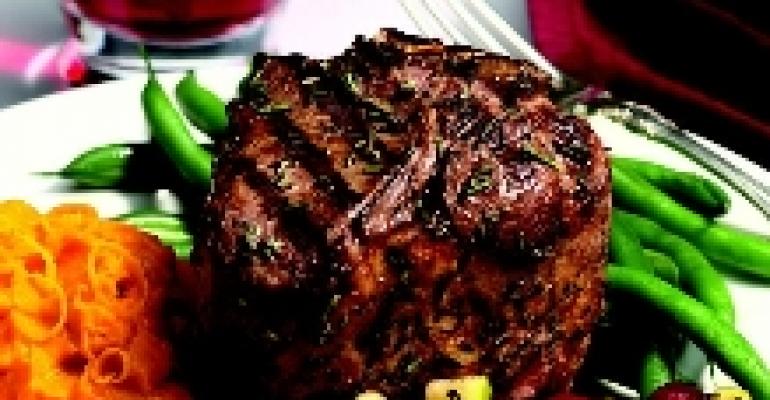 Sprinkle it over, soak it in, rub it on or drizzle it around. Marinades, rubs, and glazes take little labor to implement but the huge impact they can have on the finished project make it a high-payoff effort.

Before grilling, marinades and rubs impart tang, spice and tongue tingling heat, depending on the mix of spices, herbs, and fiery chiles. During grilling, rubs used sparingly add tangy, sweet and hot notes to an entrée—rubbed in liberally, they form a tasty crust sealing in the natural meat taste. And after grilling, sauces, glazes and flavored oil drizzled on or around the entrée complement it with both savory and sweet flavor notes.

Indeed, operators FM spoke with tell us that grilling and barbecue menu items enhanced with herbs and spices are "must haves" on menus today.

College requisite
"Grilling and/or barbecuing is more than a tradition in Kentucky," says Brett Morris, marketing specialist at the University of Kentucky, "it's a Southern right of passage!" Dining services flavors pork with a different marinade each day, incorporates a basic dry rub on meats in the grilled area, and slathers pork with a classic Kentucky bourbon BBQ sauce.

"Customers also rave that the grilled burgers at the K Lair, a campus dining landmark since the 1960's, has the best burgers on campus," he says. The recipe hasn't changed in more than 40 years. The secret? A simple one—the burgers are liberally sprinkled with seasoning salt before they are grilled.

Spring brings the annual outdoor "Steak Fest" to campus. Guests tear into in a tender, highly-seasoned rib eye steak for $3.00. "And the smell that wafts through campus is a marketer's dream," notes Morris.

Grilling under fire
During long New York winters, customers at SUNY Cortland can dig into spicy grilled entrée recipes inspired by chef Thomas Kiernan's decade in the tropics (at a biological station for research).

Kiernan says his spice inspirations are influenced by Barbara Wolinski, the mother of "jerk" cooking. Jerk seasoning, a dry blend that originated in Jamaica, consists of a mix of chiles, thyme, spices (cinnamon, ginger, allspice, clove) garlic and onion, the quantities of each spice varying depending on the cook.

As luck would have it, this year's NACUFS Culinary Challenge features lamb, a popular meat in the tropics. "For the competition we developed our own variation of jerk seasoning—West Indian Rub—that includes brown sugar and cardamom and has a more pronounced flavor of chipotle pepper than the traditional mix," says Kiernan. "This brings out a subtle smoky flavor, not just a heat sensation," he adds.

The dish pairs tender slices of spice-rubbed lamb loin glazed with rum with curried coconut lamb medallions on yucca skewers. At the university, the chefs also use the earthy rub on a slow-roasted chicken half. "This definitely sells better than lamb does," he says.

Neither the elements nor commercial restaurant competition deters noncommercial chefs from their grill spectaculars.

In order to bring in more spring revenues and to lift spirits, Richard Robinson, director of food service at Children's Memorial Hospital in Chicago, and his staff promote "Grilling in the Park."

The grill site, Julia Porter Park, named for the founder of the hospital, is centrally located in the heart of the Windy City and near a commercial restaurant district. On Thursdays and Fridays in the spring and summer the park is turned into a friendly neighborhood cafe.

"We're not really too popular with local restaurateurs," says Robinson with a chuckle. Not only are the prices good for their customers—hospital employees or not—but "it keeps revenue higher in what otherwise would be a slow season," he says.

The menu varies from the traditional hamburger/bratwurst theme to marinated steaks, chops, and thick fish steaks. "One of our most popular items is Raspberry Marinated NY Strip Steak", she says.

Rubs and marinades not only add kick to recipes but also are a healthful flavor component. "Rubs are a great way to season protein because you can add variety to the recipe without altering or adding to the sodium and/or fat content of proteins," notes Jaskowski.

"Of course, you can add flavor by marinating in a variety of fat-free salad dressings. But, even marinating in an oil-based dressing can keep the recipe low-fat overall if you use a lean cut of meat, poultry, or fish in the initial preparation," she adds.

Grilling satisfies customers cravings for entrees that are both nutritionally sound and comforting, too. "Of course, our dining services department works hard to promote healthful living and eating within a fun, relaxed atmosphere," says Jill Bachelder office/retail manager for Med Central Health system in Mansfield, OH. "But we also get a call for traditionally higher-fat comfort foods."

Another favorite is a sweet and spicy Jamaican Thai fusion-style wing sauce for those not so concerned about fat calories!

Grill vision
St. Joseph Health System, Sonoma County, CA, staff cooks came up with their own lunch special grill concept in 2003 and sold the idea to management, according to Linda Hansen, director of nutrition services.

In 2004, a full grill program premiered to rave reviews. To promote the program, hospital staff received intranet alerts, and flyers were posted in the dining room entryway and on the cafeteria walls. "However, it was word-of-mouth about the beautiful display plates that lead cook Arturo Salguero-Galicia created and his spicy homemade marinades, rubs and sauces that had the biggest marketing impact," stresses Hansen.

"Customers now pay a retail price, rather than a subsidized price, because the quality is 'restaurant' level," she says. "Our sales grew about nine percent since the full grill program was started."

"Now more than ever, customers really seem to appreciate and enjoy dining services. I get a lot more smiles and waves and the staff is getting more recognition for a job well done."

To view the recipes published with this article, click here: fire and spice recipes