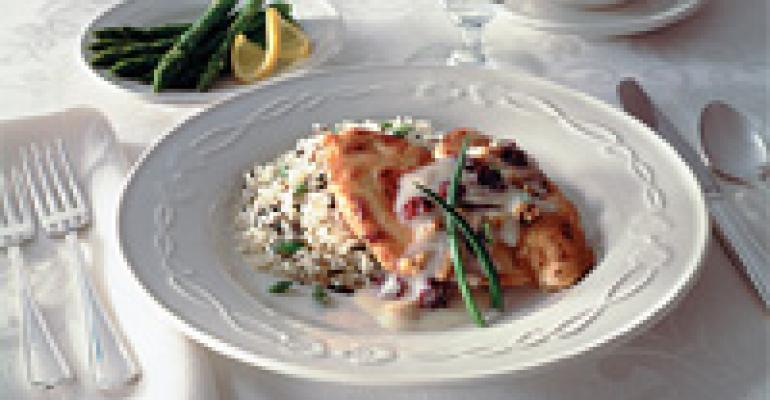 To garnish or not? That is the question. Some chefs despise having anything on a plate but the essential food; others garnish with something that reflects the flavors on the plate; still others are regular users of creative license, drizzling, dropping and sprinkling the plate with a myriad of sauces, spices and eye–catching accouterments.

“There is some controversy on whether or not garnish needs to be functional,” says Phillips. Non-functional garnishes, such as a large sprig of rosemary, cannot be eaten. However, if a chef uses the rosemary to flavor a sauce that complements the dish, it is considered by some an appropriate garnish.

Onsite operators need to consider more than the individual plate when garnishing. The serving area itself is a major concern.

“Onsite can be a tough environment because what you use to pretty up the food can easily become unappealing after sitting in a steamtable service area for too long, says Caludia Sutherland, president of “When the Mood is Food, Inc.,” a Minneapolis–based food consulting company.

“Fresh or dried herbs that are a great garnish in some situations can start to look limp and bedraggled after 15 minutes under hot steamtable lights.”

Sutherland advocates experimenting with different garnishes like colorful spices (paprika) or crunchy components like potato chips, chow mein noodles, corn flakes or toasted nuts and breadcrumbs which when sprinkled on top not only impart texture but color as well.”

The simplest rule of thumb for garnishing on display cooking stations is to re-garnish. Though Sutherland recommends using garnishes that are components of the recipe, she feels more strongly that the items should not be a “disconnect” from the formula itself. For example, “I go crazy when food is garnished with things that do not apply to the actual recipe, for example, when I see mint leaves around a chocolate raspberry torte. There’s no mint in that torte so I don’t feel it belongs on the plate.”

Keep the food in the serving pans looking as appetizing as possible. This is a simple concept, but one that is often overlooked.

“Take a favorite—macaroni and cheese—and train staff to scrape the crusty edges and turn them back into the main dish often—perhaps after each serving is dished out,” advises Sutherland. The same can be said of other foods for different reasons.

For example: bowls of sauced noodles need to be constantly turned, not only to distribute ingredients, but to keep the noodles moist and enticing to the eye. Large pre-dressed salads, like Caesar, need to be tossed and refreshed often.

For a touch of whimsy, creative line staff can be taught simple garnishing techniques. When serving a hamburger, why not take an extra minute, engage the customer by asking if they would prefer ketchup or mustard and then squeeze two zig zags of the requested condiment on the side of the plate?

“Where does it say we have to give mustard packs? Why not drizzle the plate with it? asks Sutherland. “You can do this with anything you can put in a squeeze bottle that keeps its integrity,” says Sutherland.

Another simple trick: “keep a separate bucket of fresh herbs nearby (not under the heat lamp) to sprinkle on the plate or on top of entrees. This simple technique adds an extra touch and a hint of fresh, green flavor,” says Sutherland

On the deli counter: “consider something as simple as putting deli salads on a bed of shredded lettuce or red cabbage (as opposed to a single lettuce leaf which tends to look limp),” says Sutherland.

“This tells the customer it has been cleaned and that its fresh and crisp. Use the same fresh herbs in the bucket to sprinkle on top of creamy salads, or sprinkle them with vegetable confetti: chopped colored peppers or carrots and yellow peppers—“even a teaspoon sprinkled onto salads will add value,” says Sutherland.

“I realize in high volume serveries they’re not going to have the time to carefully place garnishes. But how long does it take to take a pinch of nice fresh green herbs and sprinkle it over a casserole or around the edge of the food in the center of the plate?” says Sutherland.

Keep in mind that garnishes used properly can be profitable, while unnecessary garnishes are costly. Many plates do not need garnishing if they are full and the food itself possesses all the color necessary. When a garnish is needed, it should be planned into the plate layout and its cost should be included in the menu price planning.