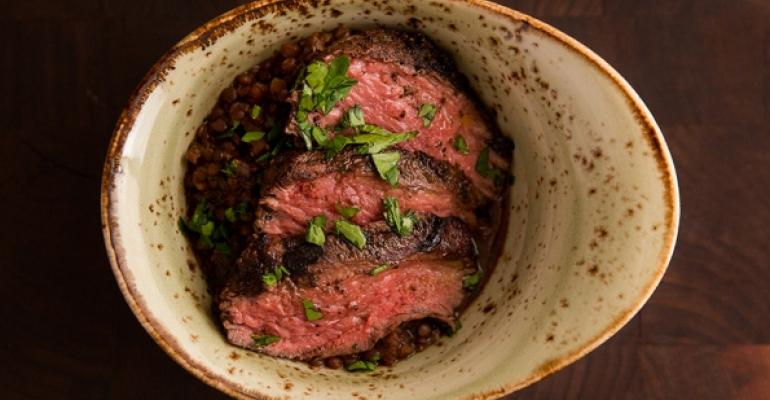 For taste, health and environmental reasons, chefs are switching up their beef sourcing.

A lot of chefs think so, and are advocating grass-fed beef, claiming that it’s not only healthier but tastier as well. It costs a little more, sure; however, it’s more available than you might think, and possibly more affordable than you think, especially if you are careful with portioning.

More importantly, diners are saying it’s worth the effort and premium, and—at the end of the day—they drive demand.

For example, Boston University (BU) Dining Services asked 3,000 student diners, “What type of sustainable food is most important to you?”

Respondents gave the highest marks for humanely raised protein, and thus dining services switched its beef sourcing. Today if you grab a burger or anything made from the 23 tons per year of ground beef served in the university’s three dining halls, it will be made from 100 percent grass-fed Maine cattle.

“We take the results from the survey into consideration, so we have an idea of our customers’ priorities,” says Sabrina Pashtan, sustainability coordinator, BU Dining Services. “That’s a big part of the motivation we have for allocating a budget [for sustainable food purchasing], because it’s what students want.”

It’s a grass-roots movement and it’s not just college students who are behind it. Their younger siblings in K-12 settings want their meatloaf from pastures, not feedlots. And they are learning about the difference from chefs like Rob DeLuise, Flik Independent School Dining foodservice director at Rocky Hill School in East Greenwich, R.I.

“I push the kids to know where their food comes from,” DeLuise says. He turns grass-fed beef into school lunches like Swedish meatballs, braised beef with bok choy and a burger bar.

“A cow’s diet is what dictates the taste,” says Rey Hernandez, corporate chef with Epicurean Group. “The stuff commodity beef eat [in typical feedlots] is stuff you don’t want to be eating, like antibiotics. So grass-fed beef is part of our pledge to our customers.”

Pashtan elaborates: “Basically, grass is a cow’s natural diet and that’s what it comes down to. We’ve been feeding cows grain and corn for a while now because it’s easier, cheaper and more efficient in terms of growth.”

Left to their own accord, however, cattle will graze for their calories. Pasture is their natural habitat, rather than being crowded into a feedlot. “Grass-fed is a better scenario for the animal, because they’re able to graze as opposed to being in a CAFO (concentrated animal feeding operation), where conditions are poor,” Pashtan says.

Advocates claim the butchered product is healthier to eat, adding, “it’s part of a cycle with the earth as opposed to the growing of GMO [genetically modified organism] corn that’s used for the feed and is typically enhanced with antibiotics and growth hormones. Grass-fed beef doesn’t have those elements. And it’s also leaner. So from humans’ health perspective, grass-fed beef tends to be more nutritious,” Pashtan says.

That’s all fine for the cattle and our nutrition; however, how does it taste? Here’s where chefs come in.

“Lean.” “Beefy.” “Minerally”…if that’s a word. Those are some adjectives chefs apply to grass-fed beef.

“Some people say ‘gamey,’ but it’s really minerally,” Hernandez says. “I’m addicted to rare meat, so I love grinding grass-fed beef fresh for beef tartar, or if I have a burger I want it really rare—a black and bleu burger (Cajun spices and bleu cheese) that’s really, really, rare; that is good eating.”

Richard Jarmusz is the executive chef of the University of Vermont Medical Center, in Burlington, Vt., where about 90 percent of all beef used is grass-fed and local. He says the grass-fed flavor has won over his palate.

“Sure, with grain-fed, the marbling adds flavor and helps the meat be more tender,” Jarmusz says. “But I like grass-fed because the meat has a richer, darker, more robust flavor. Flavorwise, I just think it’s better.”

For Phil Wright, corporate chef de cuisine at Epicurean Group, the trick is patience and a slow and low cooking technique.

“Grass-fed beef has a much lower fat content,” Wright says. “So, in a braise, you want to add liquid by using vegetables with a high moisture content. You want to cook the meat slowly at a low temperature, and pay special attention to your seasoning. We’ve also had success with the sous vide technique.”
DeLuise agrees that lack of marbling is a trade-off.

“In exchange for that, you are tasting the diet of the animal, which is grass, creating the flavor profile,” he says. “So rather than just tasting fat, you’re picking up this piney flavor. So it lends itself to a really simple cooking style because you’ve got that different flavor.”

“Depending on the cut, keep it simple,” DeLuise continues. “If you’re doing steaks, just add salt and pepper and let the meat do the talking. With the cuts you’re going to braise, and with ground beef, you can get more involved with the flavors.”

In addition to the burger bar, grass-fed beef shows up in school meals that DeLuise categorizes as “creative comfort food,” like chili, beef stroganoff and braised short ribs.

The flavor of grass-fed beef is powerful enough to evoke memories for Ron DeSantis, CMC, director of culinary excellence for Yale Dining. In the early 1980s, he was in the midst of a very exciting culinary scene in Germany.
“The Ferran Adrias, the most cutting-edge chefs of the world, at that time were all coming out of Germany,” DeSantis says. “So I went there and cooked. I went for a year, but I stayed for five years.”

The grass-fed beef being used in those kitchens came from France, and DeSantis sums up his experience: “This is what beef is supposed to taste like.”

Currently, Yale offers all grass-fed beef from Australia, in such recipes as braised short ribs and beef tenderloin with ghost turnips. For burgers and other items, the “blendability” concept comes into play, with mushrooms being blended into beef for a healthier profile, umami flavor and a good texture as well.

Kurt Roessler, director of food and nutrition services at Huggins Hospital in Wolfeboro, N.H., comes from a fine dining background, working mainly in small bistros where sourcing local and sustainable foods was the norm. So when he started at the hospital about three years ago, he jumped at the chance to introduce responsibly raised, sustainable grass-fed beef. And since he’s now in a healthcare setting, where the correlation between food and well-being is highlighted, he’s found more reasons to choose grass-fed beef.

“I was a little blind to the antibiotic problem in animals,” Roessler says.

At a New Hampshire Health Care Without Harm meeting, Roessler’s awareness was raised.

Also at the meeting were the farmers of Miles Smith Farm. They eventually would give Roessler and his team a tour of their farm.

“I was blown away by the level of care they give these animals,” he recalls, adding that Miles Smith Farm works with a local processor and also about 10 different New Hampshire farms that pledge to raise their animals the same way. That helps meet the demand—about 2,400 pounds a year for around 80 percent of the beef served at the busy hospital café and to patients.

“To be able to get the meats that we serve here from a place that’s 26 miles away, it’s a win-win-win, for us, our patients, our staff and the local farming community,” Roessler adds.

Within the Supply Chain
Roessler was lucky to connect with a local farm that could meet the hospital’s demand and also to have the support of hospital stakeholders, he says. But what about the cost?

“It certainly is more expensive,” Roessler admits. “Luckily, I had the support of the board, and we all agreed that it’s going to cost more, but it’s going to be worth it.”

“Healthcare is changing to this whole-health model where it’s not just about treating people, but it’s being more preventive,” Roessler says. “We just went with it and made cuts in other places. In the long run, it hasn’t raised my food budget.”

What if you’re managed by a large contract company? Grass-fed beef can still be a possibility.

In Pashtan’s role as sustainability coordinator at BU, she oversees recycling, composting and waste reduction, manages the farmers market, hosts sustainability events and also works within the supply chain.
BU Dining is managed by Aramark, which has a relationship with nearby Maine Family Farms.

“Aramark’s supply chain worked with us,” she says. “It’s helpful to have that resource because we have both our local team and then we have the corporate team and we can utilize both to get what we need. Maine Family Farms has a contract with Aramark, but it’s specifically for us.”

BU Dining Services committed to reaching the goal of getting 20 percent of food from sustainable sources by 2018. The goal was reached three years early, with 22 percent of food and beverage purchases meeting criteria set by the Advancement of Sustainability in Higher Education. A big part of that percentage comes from the 118,000 burgers, 3,000 hot dogs and 20,000 pounds of ground beef, all grass-fed, used per year in BU’s dining locations.

Cattle and the Drought

All over the country, the possibility of offering grass-fed beef hinges on what the ranchers, their land and their animals are experiencing that year. It’s especially true in California, where a devastating drought has had a big impact on herds of cattle.

“We’ve been fairly fortunate [in getting grass-fed beef], but the drought has impacted us,” Hernandez says. “Ranchers in California started selling off their herds. We had a source in San Louis Obispo and they basically closed their doors. They couldn’t keep up with the demand. We can get it from a distributor, so we have a consistent supply. We are seeing boutique ranchers who are supplying to as many people as they can because the demand is there.”

A Beefed-Up Budget?
No doubt about it, grass-fed beef is more expensive than commodity beef. But that doesn’t mean it can’t work on a budget. Here are some tips:

âœ“ Offer smaller portions. Ron DeSantis, CMC, director of culinary excellence for Yale Dining, says, “Customers are apt to take more appropriate sizes because we have it portioned like that, in 3- or 4-ounce pieces, rather than 5 or 6.”

âœ“ Don’t let beef “rule the menu,” says Rey Hernandez, corporate chef, Epicurean Group. “We offer a lot of other proteins, including meatless proteins. So we can spend a little more on quality beef.”

âœ“ Use ground beef. “It’s more economical,” Hernandez says. And it can go a longer way, especially when it’s part of a casserole or blended with mushrooms or grains in a burger or meatloaf.