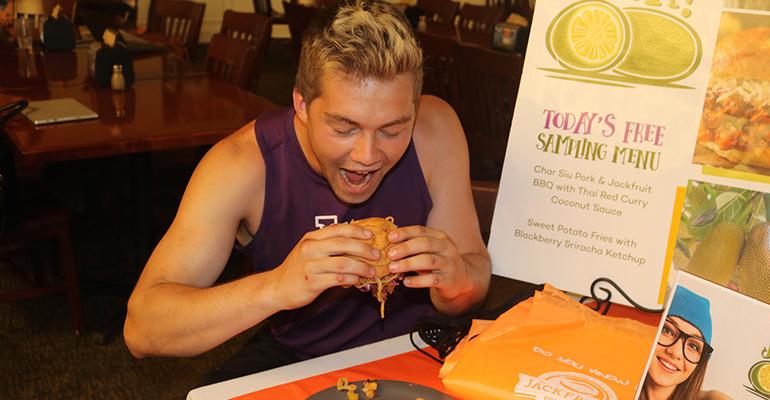 Recent pop-up events at Belmont and Lipscomb Universities in Nashville gave students a taste of what the exotic Asian fruit can add to traditional barbecue dishes.

It takes some gumption to mess with barbecue in the South, but Sodexo not only pulled it off at pop-up events at two Nashville university client sites but also got rave reviews from students who got of taste of what the foodservice management company plated.

The events, termed “You Don’t Know Jack,” were held April 20 during lunch at Belmont University and dinner at Lipscomb University and featured barbecue sandwiches made with jackfruit, an exotic Asian product that is part of the fig, mulberry and breadfruit family of crops and is considered a superfood because of its high concentration of nutrients like potassium and vitamins B6 and C.

The pop-ups set up in the residential dining hall at each school and invited students to sample char siu and jackfruit barbecue sandwiches with Thai red curry coconut sauce, accompanied by sweet potato fries with blackberry Sriracha ketchup. The recipes were developed by Lisa Feldman, Sodexo’s director of culinary services to test the popularity of jackfruit.

“We’re constantly developing dishes that walk the line between on-trend flavors and nostalgia,” Feldman noted in announcing the pop-up events. “Plant-forward and blended protein approaches are huge market trends, so we wanted to take a non-familiar product like jackfruit and marry it with a nostalgic product like pulled pork barbecue to honor the best of both worlds. What better way to figure it all out than staging a limited-time pop-up in the heart of the South?”

The pop-ups were staged in collaboration with Sodexo supplier partners Kikkoman, Dole, the Jackfruit Co. and Ardent Mills, which supplied sandwich rolls incorporating sprouted wheat flour with quinoa and other whole grains. Sodexo chefs Andreas Ortner at Belmont and Darry Huntsman at Lipscomb led the onsite culinary teams at the two locations.

There were no leftovers.

Students at both locations were encouraged to provide feedback via Sodexo’s myDtxt communications platform. Of those responding, three of four were highly positive, noting both the flavor and the nutritional benefits.

The barbecue products sampled at Belmont and Lipscomb are slated to be incorporated either into other pop-up events or the residential dining menu mix at other schools where Sodexo operates, says Senior Marketing Manager Julia Pfeifer.

As for why it was initially introduced in Music City, it’s because “Nashville is really known for its barbecue; it’s kind of a foodie city,” Pfeifer offers. “They take their Southern comfort food really seriously, but they also appreciate something that is new and plant-forward as well, so we thought Nashville was the perfect location.”