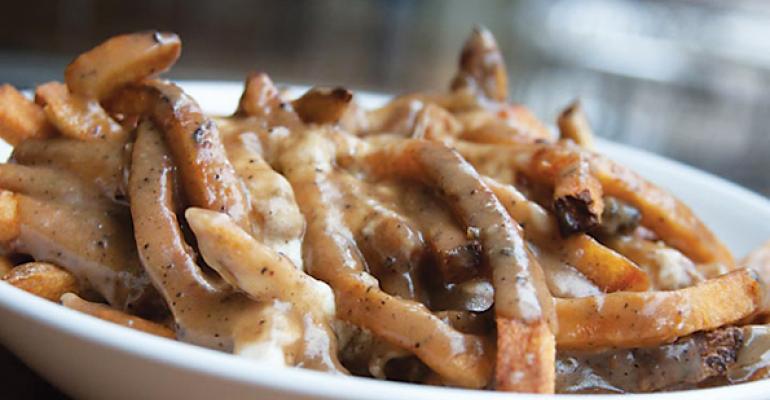 Menu Mix: Fries on the (Wild) Side

Just as the ‘better burger’ trend has taken the cheeseburger from plain jane to truffle-topped superstar, French fries are the next to step out of the sidelines.

At Sawyer’s stadium concept and also his Cleveland restaurant, French fries are taken very seriously (a three-day process involving beef suet). When they come out of the fryer, it’s a Sawyer trademark to toss them in a bowl with sprigs of fresh rosemary and whole cloves of garlic. The essence of great fries.

“This type of food isn’t new…15 years ago, people were eating just as many burgers, pizzas and fries. Only now, American artisans are taking back the craft: the burgers are handcrafted, pizza is wood fired. French fries at a stadium used to be strictly frozen, and if you wanted to get crazy with toppings, maybe you’d have cheese. Now, people are paying attention to technique and ingredients. It’s about making it approachable and craveable to everybody.”—Jonathon Sawyer, chef, restaurateur, The Greenhouse Tavern, Noodlecat, Sawyer’s Street Frites (Aramark at Cleveland Browns Stadium) SeeSaw Pretzel Shoppe, Tavern Vinegar Co.

“…diners crave comfort foods too, not just ultra-healthy fare. In 2014 chefs are experimenting with new fry toppings, like teriyaki mayo, herbed goat cheese crumbles and spicy Sriracha sauce.” —according to the report Take a Bite Out of 2014, by theDish.restaurant.com via U.S. Potato Board

Poutine or “Disco Fries”  originated in Canada and are open to interpretation.  “We make ours with braised beef short rib meat with mushrooms, tomatoes and demi glace. It’s topped with cheese curds that are made here on campus at the MSU Dairy. We’ve done a couple versions, but this is the one everyone really likes.” —Kurt Kwiatkowski, MS, corporate chef, Michigan State University

David Schneider, district executive chef, Sodexo, University of Mary Washington, uses both sweet potato and potato fries in this Asian-fusion creation that’s often served alongside chicken or fish entrees.  Out of the fryer, fries are finished with drizzle of maple syrup and a generous sprinkle of sesame seeds (both white and black, which have been dry-toasted in a pan ahead of time to develop flavor).  Japanese Fries are finished with a dash of kosher salt and served with Sriracha ketchup (regular ketchup, Sriracha and rice wine vinegar) for dipping. On occasion, Schneider adds 5-Spice Powder to the fries as well. Either way, “they’re pretty awesome,” he says.