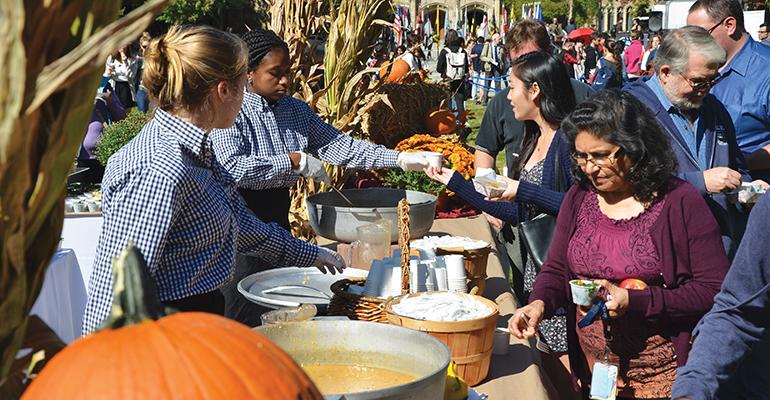 The New England table is especially charming in the fall, with simple classics and inspired fusion dishes sharing a spot.

Earlier this fall, after remnants of a hurricane blew through the East Coast, clouds gave way to a lovely crisp fall day for Yale University’s Founders’ Day celebration. About 2,500 people from the campus community participated in tours of historic spots on campus and then feasted on some New England food done right.

Yale Dining decorated for the outdoor event with a harvest theme, making use of corn stalks, pumpkins, gourds, apples and pears.

At the Garden Atrium Café of University of Vermont Medical Center in Burlington, Vt., good old-fashioned New England dishes are deconstructed, reconstructed, dressed up and dressed down in delightful ways:

New England-style fish cakes have been gaining fans at lunchtime lately. Typical preparation would be simply cod and potatoes, but this version is served with peppery fresh arugula that’s been sautéed with slabs of bacon and a remoulade that’s spiked with housemade mustard.

• If you smuggled a New England lobster roll across the Mexican border, it would turn into this: the lobster tostada, a crisp grilled tortilla topped with black beans, lobster meat and fresh cilantro.

• Take the whole-hog barbecue tradition of eastern North Carolina and bring it to Vermont. It’s less smokehouse and more of a braise, featuring mirepoix, thyme, garlic, rosemary and red wine, which turns this pulled pork sandwich into a New England signature. The same pork can also be served on a plate with tomatillo salsa.

Freshmen get a taste of what living in Amherst, Mass., will be like soon after they arrive at the University of Massachusetts. A hearty East-coast feast is in store when UMass Dining serves hundreds of whole lobsters, steaks, baked potatoes and more at the much-anticipated Halloween lobster dinner.

And that’s just the first taste. Throughout the year, lobster shows up in non-traditional dishes like a lobster stir-fry with rice wine, ginger and scallions that’s on the regular rotation.