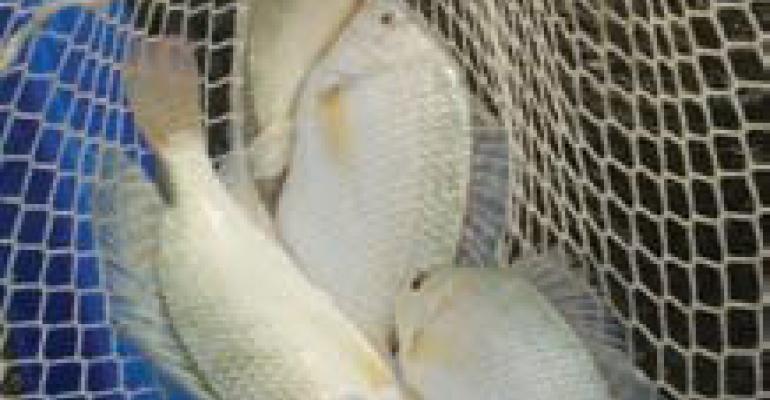 Entrees like beef stew, pot roast and macaroni and cheese are all cold-weather comfort foods dishes that customers like, but they also tend to be over-menued at this time of year. "If you can bring seafood onto the menu in a comfort-food style presentation, it can really excite customers who are looking to experience something different," says Eric Eisenberg, executive chef at the Swedish Medical Center in Seattle.

"This is an easy and cost-effective way to work sauteed shrimp, which has a high perceived value, into healthcare menus," he says.

Combining it in a zesty, tomato-enhanced, bayou-style preparation and pairing it with an interesting rice base (see recipe) further boosts the appeal. Eisenberg flavors the rice pilaf with traditional herbs de Provence, but in a clever marketing move when naming the dish, chose to emphasize lavender, one of the ingredients in the classic herb mix.

"I think it's safe to say the word ‘lavender' hasn't ever appeared on the menu here next to rice before," he notes. "It definitely takes it to a whole new level. It's the kind of dish that shows the customer we have some real culinary expertise," he says.

At Clarian North Medical Center in Carmel, IN, Chef Peter Fulgenzi draws on his 18 years of cooking experience in Hawaii to infuse the menu at the site's Atrio restaurant with plenty of seafood. At the exhibition, toss-to-order station, the main protein element is fish at least twice a week. The one-bowl meals, combined with a small soft drink, run $4.95 and rank among the most popular items at the restaurant, Fulgenzi says, accounting for about 15 percent of sales daily.

Favorites include a risotto with butternut squash, Swiss chard and shrimp; spice-andherb-crusted salmon on a bed of fingerling potatoes jardiniere; and jambalaya with andouille and seafood. Served in shallow, pasta-plate style bowls, the dishes achieve "a nice height, they look colorful, and come out steaming hot" – an irresistible and satisfying combination.

Seafood and noodles
Pairing seafood with noodles, whether as a one-dish plate of pasta or a hearty soup, sparks interest among foodies and comfort seekers alike. Spicy seafood fettuccine, cioppino with spaghetti, and Asian noodle bowls are some of the dishes onsite chefs list as popular current picks.

"About 30 percent of the people who walk through the doors immediately choose their meals from the pho bars when they're offered," Collins says.

Although pho seems to be the current darling of the onsite noodle bowl circuit, plenty of other Asian preparations warrant experimentation: udon, soba and cellophane noodles can be enhanced with broth, vegetables and shellfish, chunks of whitefish, or even topped with fillets glazed with a plum sauce or encrusted with sesame seeds, panko crumbs or herbs and spices.

At the University of British Columbia in Vancouver, Executive Chef Piyush Sahay likes to warm up customers with a seafood and noodle-based Singapore Laksa (see recipe), that, even though its literal translation means "thousands" of ingredients, is actually simple to prepare and widely appealing. Made with several kinds of seafood, coconut milk and other ingredients, it's popular in Southeast Asia, and just might be poised to become the next new noodle bowl craze here.

Prep Tips
Mark Ainsworth, chef/instructor at the Culinary Institute of America in Hyde Park, NY, encourages onsite chefs to incorporate more seafood into menus and look for ways to cross-utilize it, which is where one-dish meals can prove invaluable.

"Don't bring in a particular type of fish for just one menu item," he advises. "Cross it over elsewhere on the menu, too. If there's a plated, sauteed fish item, for instance, use that same type of fish in paella, gumbo or cioppino preparations. There are plenty of other outlets for seafood use, and menuing it in as many ways as possible allows you to keep less stock on hand, limit inventory and maintain more control over it."

But when storing fish, Ainsworth suggests segregating different species in separate pans. Whole fish or fish with skin can be kept on ice, but fillets should have a plastic wrap or some other barrier between them and the ice.

And to achieve maximum taste impact? Ainsworth is a strong advocate of marinades and rubs."Caribbean and Latin flavors —lime juice and olive oil, Puerto Rican adobo, Yucatan annatto paste, Belize recado —they work on any fish and capture a lot of flavor," he says.