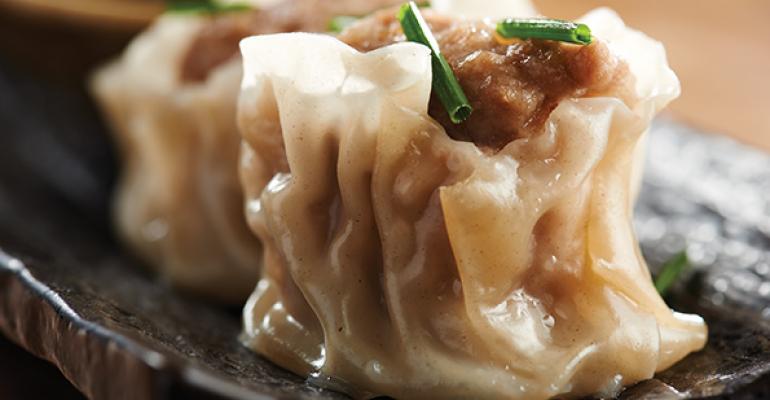 <p>SO PORK-A-LICIOUS: Dim sum was the theme at the National Pork Board&rsquo;s annual summit this year, held at the Culinary Institute of America at Greystone.</p>
Menu Trends

Pigging out on dim sum

GALLERY: How to Make Pork and Shrimp Siu Mai &gt;&gt;

Dim sum must have been ahead of its time when it began long ago. It’s simultaneously a centuries-old Chinese eating custom and one of the most current food trends.

Dim sum is a family-style way of eating, with a communal vibe, while still managing to be customizable. The dim sum model—passing carts offering selections of dumplings, rolls and more—seems like it was made for millennials, and anyone who likes to gather for food, fun, fellowship and, oh, yes, succulent pork. Pork is the main protein on 39 percent of dim sum menu items at restaurants across the country, according to data from Food Genius.

“Dim sum is the fast food of China, and the tradition goes back far,” says Eric Ernest, executive chef at the University of Southern California (USC). Ernest and the USC foodservice team are taking that tradition and incorporating it at the university in a new Asian concept that will feature several types of dim sum favorites, including dumplings and pot stickers, slated to open next school year. Dim sum’s strong campus appeal is behind the new concept.

“[Dim sum is] customizable and multifaceted,” Ernest says. “There are a lot of different flavors, colors and textures with a unique presentation, plus it’s interactive. It’s also somewhat mobile. Basically, there’s a lot going on.”

In all the excitement of dim sum, pork is the protein that makes a lot of the savory deliciousness happen, and Ernest has plans to make the new concept a nose-to-tail occasion with the addition of soup dumplings to the menu.

“Soup dumplings are my favorite,” he enthuses. “They’re just so amazing. It’s a traditional dumpling and the broth is cooked with pigs’ feet or tendon, and when it gelatinizes, you have a pork soup base and you mix that into the raw filling.”

The result is a self-steaming dumpling that’s “soft and unctuous, with a good portion of the base melting as it’s cooking, steaming in a closed environment so the filling becomes really soft,” he says.

Kids Follow the Dumpling Truck
You won’t find dim sum success only on college campuses. Following the success in the last couple of years of Flik Independent School Dining’s pop-up taco “truck” (not a real truck, but a sturdy façade that “parks” at different Flik K-12 accounts throughout the year), the Half Moon Dumpling truck rolled out last fall.

“The reason I wanted to do dumplings is that dumplings are a high-labor item and more pricey, so we could do it as a special promotion,” says Adam Byrne, corporate executive chef for Flik. “It’s been a home run.”

By the end of the school year, five Half Moon Dumpling trucks had made stops at more than 130 schools on a staggered schedule, with repeat appearances at a few locations.

Students could choose a lunch serving of three pot sticker dumplings, dipping sauce and a side salad to round out the meal. Five varieties of dumplings were available: pork and cabbage, Thai-style chicken lemon grass, chicken with a whole-wheat wrapper, edamame (vegetarian) and kale (vegetarian). The side salad was a Napa cabbage slaw with pickled veggies.

Because of volume concerns, making dumplings by hand at most accounts wasn’t practical. “So we partnered with a company that makes the best dumplings I’ve had in this setting, with natural ingredients and authentic flavors,” Byrne says.

The managers guide that Flik provided for all participating schools to help them coordinate the “truck” included the legend of the pot sticker dumpling:

“Legend has it pot stickers were invented by a chef in China’s Imperial Court who accidentally burnt a batch of dumplings after leaving them on the stove for too long. The overcooked dumplings were burnt on the bottom only, and not on top. With no time to prepare a new batch, the chef served the dumplings with the burnt side on top, announcing that they were his own special creation. Fortunately, the court members loved them.”

True or not, that kind of lore is a great story for school chefs and their teams to share with the kids as they serve, Byrne says.

Another Chinese legend says that eating dumplings on New Year’s Eve brings good luck and happiness. Since the shape of dumplings is similar to that of ancient Chinese gold or silver ingots, they are also believed to bring wealth.

So when Chinese New Year came around earlier this year, Muhlenberg College dining services, in Allentown, Pa., put on a fun, interactive event: a dumpling workshop.

“We sent a blast email and ended up with 90 students who signed up to learn how to make dumplings,” says Jon Middleton, director of culinary operations with Sodexo. “People from all over campus were interested in this event, and we called it Dumpling Fest.”

In groups of 30, the teams worked together, and 3,000 pork and veggie dumplings were made and devoured, says Middleton, who got experience making dumplings at a previous job in Disney World’s Polynesian Village. He fine-tuned those skills with help from Hannah Wong, second cook, who also instructed at the workshop. Lion’s Head Soup, which features a giant meatball, was another item that was created at Dumpling Fest.

“Dumpling Fest will become an annual event,” Middleton adds. “Dumplings have been an emerging trend for a while, and the interest remains strong. I don’t think it’s peaked yet.”