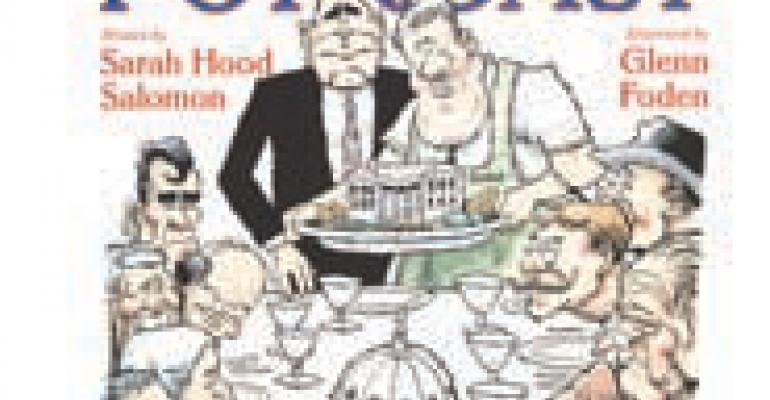 Many of us already know about George W. Bush's PB&J preferences, Bill Clinton's fondness for fast food, George H.W. Bush's disdain of broccoli, Ronald Reagan's hankering for jelly beans and Jimmy Carter's association with everything peanuts. But what about before them? What did the men who served as president like to eat?

Well, here is a handy-dandy, all-in-one guide to the favorite dishes of every single man who has ever sat in the oval office (or "pre-oval office"). Each gets a short chapter—about four pages—that includes three or four recipes.

Heck, even William Henry Harrison gets four pages, and he only served for a month before dying of the pneumonia he contracted while windbagging his way through a nearly two-hour inaugural speech in the sleet without a coat. Apparently, not even "General Harrison's Favorite Eggnog" (with half pint of bourbon!) was enough to retherm Old Tippecanoe, but at least we have the recipe.

What the book does offer, other than an amusing jaunt through politico-culinary memory lane, is a capsule history of food trends in the United States since the late 1800s.

Noticeably, the early chief executives were less shy about the booze. It's hard to see any recent president publishing a recipe of his "Favorite Whiskey Sours," like James Madison did, or being associated with a weapons grade brain cell neutralizer like "Daniel Webster's Punch" (ingredients include 1 quart brandy, 3 quarts dry red wine and 2 bottles of champagne).

But if you're looking some ideas to add novelty and authenticity to a President's Day theme dinner, this book could be just the ticket.