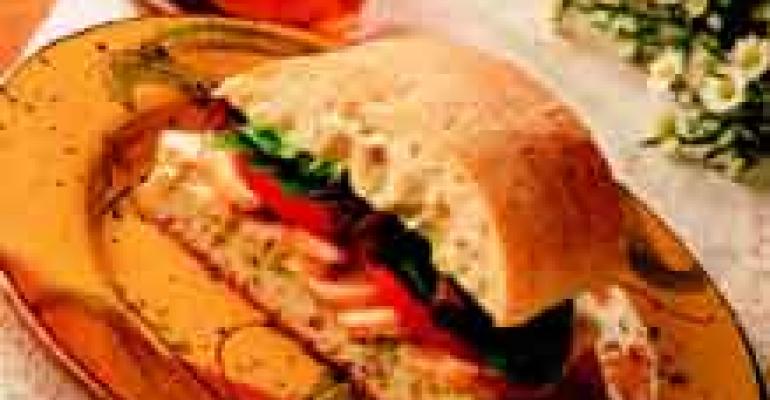 If the low-carb craze couldn't topple them off their perch, maybe nothing can. Sandwiches still reign supreme in driving onsite lunchtime sales.

Variety, Variety, Variety
"On any given weekday at Boston College, our customers can find 75 different sandwiches across all campus operations, before you count the 19 bread choices and variations on standard sandwiches," declares Associate Director of Restaurant Operations Helen Wechsler.

It's no wonder, then, that sandwiches make up about 40 percent of lunch sales on the Chestnut Hill, Mass., campus. "But students eat them at every meal," Wechsler says. "Sandwiches provide comfort, familiarity, portability, and are filling—all in one."

At the school's three Wrapsody locations, students can grab such whimsical, music-inspired wraps as Shuffle off to Buffalo (buffalo chicken), Madame Butterfly (Szechuan-grilled flank steak), Magic Carpet Ride (falafel) and Salmon Sonata. "Sales increased at these locations by a third when we started heating the wraps and making them in front of the students," Wechsler reports.

A specialty sandwich line at the Eagle's Nest Deli boasts fresh baguettes brought in from Montreal. A carved meat sandwich station offers a daily feature such as Green Mountain Ham, which is made-to-order with maple-glazed ham, apple-carrot slaw and cheddar on a harvest grain roll. Specialty paninis, upscale sandwiches made on breads from local artisan bakeries, multiple vegetarian selections and traditional deli orders offer near endless sandwich possibilities for students.

When Southwestern Vermont Health-care in Bennington switched to self-operation about a year ago, Associate Director/Chef Marcel Holland took the opportunity to upgrade sandwiches and increase variety. "Now we've got 20 to 25 different sandwich variations available, and that business makes up about 60 percent of sales at lunch," he says.

By increasing choices and quality of cheeses, breads and ethnic spreads in the sandwich selections, Holland has seen sales increase by 25 percent. "Before, we had a lot of frozen sandwich items. Now, customers really love the variety and different tastes of the new fresh sandwiches."

Bread rules
While many operators have found ways to work low-carb alternatives into their sandwich menus (from offering high-fiber bread to low-carb tortillas, lettuce leaf wraps, or a small discount for the sandwich fixings sans bread), others are beginning to report a waning interest in the trend.

"Here, the low-carb fad is slowly going away," reports Food and Nutrition Production Supervisor Joseph LeCoq of East Jefferson General Hospital in Metairie, Louisiana (near New Orleans). "People are realizing its not the best thing since sliced bread."

For many, a sandwich is all about the sliced bread. LeCoq's operation makes its own croissants and French bread for po-boy sandwiches.

At Luther College in Decorah, Iowa, the fresh-baked bread that's sliced thickly in front of customers is one of the biggest draws for sandwich sales at the campus' Oneota Coffee Shop and Sunnyside Café, according to Assistant Manager Debbie Aske.

Veggie, rye, wheat and bran bread as well as Luther bagels are baked onsite, and the orders made with them are marketed as Fresh Bread Sandwiches. "I'd say those sandwiches are probably 60 percent more popular than others made with purchased breads," Aske notes.

As part of Sodexho USA's company-wide "Summer Sizzle" promotion this year, several new sandwiches debuted at the deli stations, boasting eye-catching, fresh new breads. "Working with a manufacturer, we developed a line of proof-and-bake breads that could have topicals added to them, versus inclusions," says National Executive Chef Richard Arakelian, referring to ingredients (such as herb blends, asiago or cheddar cheese, caramelized onions, pesto, or jalapeños) sprinkled or brushed on top of the breads instead of mixed in.

"I think the secret of a great sandwich starts with the bread."
-Richard Arakelian

"I think the secret of a great sandwich starts with the bread," he says. "And then of course you have to have the freshest quality ingredients, use proper techniques for preparing the sandwich, and include boldly-flavored spreads and other ingredients to get different layers of flavor. But the new breads were key in success of the promotion." Boston College's Wechsler unequivocally declares bread the secret good sandwich. "Students have grown up with deli meat and accept and so if you present a higher-end meat on a sandwich, they're not going to be willing to pay more for that. But you introduce artisan bread, such as the seven-grain or apple-cranberry we bring in from a local bakery, and that means value to them. They're willing to pay $5.99 for a sandwich with good ingredients on quality bread."

Spreading out
Good bread may be crucial in catching the eye, but unique and flavorful spreads, sauces and dressings can bring deep satisfaction to the taste buds. These days, there are rapidly-proliferating choices of prepared spreads with unusual and bold tastes on the market, from new mayonnaises (garlic, wasabi, lemon, pesto, cranberry) to aiolis, mustard variations, vinaigrettes, chutneys, salsas and ethnic sauces.

A "secret sauce" simply made from mayonnaise, cayenne pepper, paprika and seasoned salt makes all the difference on sandwiches at Memorial Medical Center in Springfield, Ill., reports Chef Becky Morrow, and customers also appreciate the array of flavored mayonnaises at the deli, including tarragon, Vidalia onion, chipotle and garlic-horseradish.

Sundried tomato pesto just made its entrance as a new signature sauce at Penn College in Williamsport, PA, and the homemade garden herb cream cheese at Iowa's Luther College is a popular choice for onsite-baked bagels and vegetarian sandwiches.

Sandwich art
When University of Washington's Triple S station opens this fall at the Seattle campus, students will be treated to a new concept in sandwiches, according to Chef Andrew Simmons. "We were trying to get away from the idea of always putting sandwiches between two slices of bread," he states. "In-stead, we wanted them to be tall and voluminous."

The result of such outside-ofthe-slice thinking is menu items such as the Mediterranean Sandwich, in which an olive-oil brushed-and-grilled piece of pita bread is smeared with hummus and piled high with a mixture of lettuce, feta cheese, olives and lamb. A Chinese General's Chicken sandwich features the famous deep-fried, spicy chicken concoction "shoved" into and spilling out of hoagie-style bread. The BLT will include lots of the typical ingredients, but will be stacked up high on one piece of toasted bread, with the other piece set off to an angle on the side.

"They're really knife-and-fork type of sandwiches," Simmons explains. "The specials will change daily and be advertised on our electronic, plasma screen menu boards. We've set this up as an interactive station, wide-open, with sandwiches being made in front of the students in a big and dramatic way. We think the kids will love it."