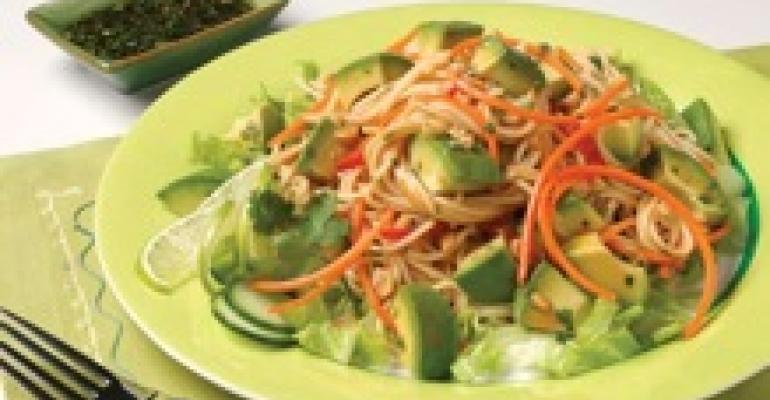 By menuing such satisfying and savory dishes side by side, the chefs at DCH Regional Medical Center in Tuscaloosa, AL, TBWA/CHIAT/DAY in Los Angeles, and Harrison Hot Springs Resorts and Spa in British Columbia have developed serving line repasts that would satisfy any foodie's fantasy.

The produce entrees' flavor profiles are more complex than they first appear. The fried green tomatoes at DCH are stuffed with black eyed peas, okra and heirloom tomatoes. The mustard-rubbed tofu at TBWA/CHIAT/DAY is layered with steamed spinach, mushrooms and smoked Gouda and is garnished with roasted red peppers. The earthy roasted butternut squash and apple soup at Harrison Host Springs is beautifully served with a luscious maple and dijon cream.

Yes, these dishes qualify as ‘vegetarian'. But unlike dedicated vegetarian station menus and concepts developed to serve a specific demographic, their juxtaposition next to traditional meats let them compete effectively for diners' attention and choice. Win or lose, these vegetable ensembles target a unique customer base: the occasional vegetarian.

Such station menu mixes are well geared to omnivorous gourmands who are eating less red meat, poultry, and fish—although they have not entirely sworn off these foods—and help them make choices that fit their individual nutrition and wellness goals.

The Vegetable Palate
TBWA/CHIAT/DAY, an advertising agency just west of Los Angeles, houses a rather large vegetarian population—roughly 35%. Keeping vegetarian customers satisfied from day to day can be a challenge for Lisa Kurth, Chef Manager for Bon Appetit Management Company at TBWA/CHIAT/DAY. "We offer a lot of variety with the vegetarian entrees," she says. "Since we're spending the time and effort on developing, preparing and plating these particular menu items, we market them to non-vegetarians as well."

When produce is prepared well, and plated appealingly, it can become a heavy weight competitor in a meat-driven environment.

"Aesthetics are very important," says Kurth. "Customers move through the line fairly quickly, so if the produce dish doesn't appeal to the senses almost immediately, the customer will choose something else." A good rule of thumb, according to Kurth, is to focus on plating technique when looking to capture a customer's attention.

"Visually speaking, the mustard-rubbed tofu has rich, earth tones with inky green spinach, and creamy Gouda dripping down the sides," says Kurth. "The roasted red peppers give it another color component and really dress the dish up."

The ideal meatless meal should feed the eyes, the nose and the stomach. This helps counteract the lingering perception among customers that vegetable-based dishes aren't filling.

However, it takes a hearty appetite to polish off most of Kurth's entrees. She incorporates essential proteins such as nuts, dairy and tofu. Thai entrees are paired with a peanut sauce. Artisan cheeses add upscale flair. A variety of seeds and nuts act as a colorful, flavorful and filling, protein-rich condiments on the salad bar.

"Meat-eating men recognize the healthful benefits of vegetarian cuisine. However, if the dishes look and taste delicious, that healthful profile becomes secondary," says Kurth. "Taste and appearance are first and foremost."

The secret to making her dishes look so scrumptious? "Pay attention to the cuts—don't mince all the vegetables. Garnish less colorful foods like tofu with vibrant vegetables and bright colored sauces. Use a variety of plate preparations to help vegetables be the star."

Mark Mendoza, executive chef at the San Diego Unified School District agrees that certain cuts and color combinations carry weight when featuring produce as an entree. "If you slice a portobello on the bias, similar to how you'd slice beef, it retains a meaty look," he says.

Make It eat as an entree
Stressing a cuisine based on the freshest ingredients, James Fowler, executive chef at the Abernethy School in Portland, OR, favors a good measure of vegetarian fare. Meats appear on the menu, but are used judiciously—on Tuesdays and Thursdays only.

"In our vegetarian entrees, the protein is either beans or cheese," says Fowler. "We do beans and greens with corn bread, macaroni and cheese with roasted vegetables or a Louisiana red beans and rice which have beautiful color contrasts and big flavors."

"We serve everything for two days, so there is always a good amount of vegetarian fare for students. Serving these types of entrees Monday, Wednesday and Friday, is cost effective for the school. With the money saved, we're able to buy better produce."

Vegetarian or not, produce is becoming a co-equal to traditional eaters.

"Meat has nothing on vegetables when it comes to versatility and flexibility," say Gary Lane, executive chef at DCH Medical Center. "While we don't have an entire menu dedicated to vegetarians, we do have occasional requests. One of my favorite dishes is a vegetable terrine with spinach and fresh produce. It's quick and its takes a big eater to finish the entire dish."

The menu is continually evolving at DCH. And as it does Lane plans to incorporate more of these types of foods into the various station concepts.

"If we serve a portabello burger in the grill station, we're likely to draw a different type of customer than if we serve the exact same burger at a vegetarian station," he says. "Same goes with the pizza. We serve a vegetarian pizza right beside a meat-lovers pizza. By positioning them side by side we're attracting a completely different kind of customer."

Texturize, Buy Local, and Look East
In addition to taste, color and texture, chefs need to ensure "tooth appeal" with vegetarian entrees. For a full measure of success, dishes must match the "chewiness" associated with meat items. To that end, grains, beans and legumes work well as accompanying ingredients.

Paul Ruszat, executive chef at the College of St. Benedict in St. Joseph, MN, explores the vegetable-rich cuisines of the Mediterranean, northern India, Asia and the Middle East. Ethnic foods have big flavors. And in most cases, these types of foods lend themselves to vegetarian entrees.

"You have to play with the mouthfeel and texture of the food," says Ruszat. "Use things like mushrooms and legumes to enhance the umami factor. At the same time, explore complementary seasonings as well as the use of local and seasonal produce."

So—are "occasional vegetarians" simply going through a phase, or do they represent a long term shift away from traditional meat-at-every-meal diners? Ruszat thinks the latter is more likely and that many of tomorrow's diners will look for meals that are lighter, healthier and don't depend solely on animal protein for the center-of-the-plate position.