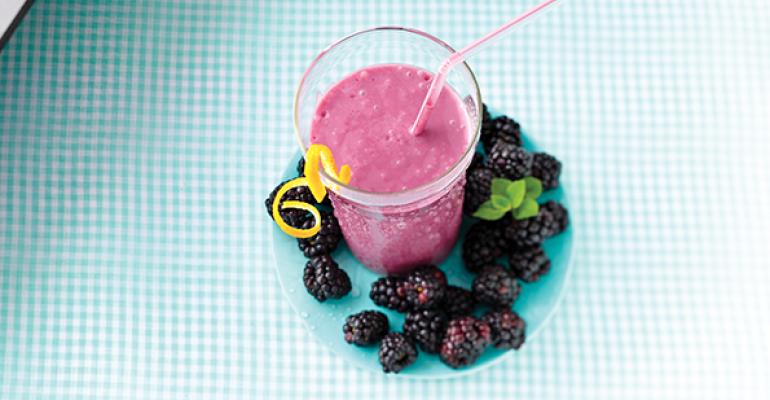 Gallery: Blend on Trend: 7 New Smoothie Recipes &gt;&gt; Don&rsquo;t let your smoothie program blend into the crowd. Mix together fresh ingredients, a strong brand for the concept and solutions that fit your operation.

Foodservice customers are slurping down smoothies faster than ever. Servings of smoothies in the US last year numbered in the millions: 577,000,000 to be exact, according to data from Mintel’s recent report, Made to Order Smoothies US.

But that doesn’t mean you can just turn on the blender and walk away. Customers don’t want just any smoothie. Among other things, they’re looking for a cup full of fresh ingredients, an interactive, customizable experience and a splash of well-being (health-related reasons are high on the list of why customers choose smoothies, according to the Mintel report).

A Fresh Brand. When a management company like Sodexo rolls out a pilot for a new smoothie concept, it doesn’t do it willy-nilly. After all, if successful, a new concept could be featured in accounts across the country. So there’s a research team, collaborating chefs and dietitians, marketing pros, focus groups and brainstorming sessions galore. They plot out recipes, branding, signage, displays, financial models, social media and more.

Not surprisingly, research conducted with consumer panels revealed a strong demand for smoothies.

“We said, ‘If we offered a fresh-made smoothie or juice in your workplace or place of study, would you buy it?’” says Eric Boerner, director of design and development for Sodexo. The response was that 82 percent would.

“A smoothie concept can be very lucrative; there’s a lot of menu flexibility and it can allow us to partner with clients who might want to change their smoothie offerings quickly,”

Boerner says. “Our clients are looking for a lot of versatility in smoothies.”

Versatility and smoothies go hand in hand, Boerner adds. Since a smoothie concept is different from a hot food concept, it can be squeezed into many places: retrofitted into an existing counter, added to an existing coffee bar or placed into a kiosk just about anywhere.

Learning more about the consumer, the group found that health-conscious diners are making smoothies and juices at home, with blenders and juicers that are close to professional grade.

“You don’t bring your blender into work or school, so many of the people we’re targeting want to be able to get that same nutritional benefit on the go,” Boerner says, adding that “it’s very important that those smoothies are made right in front of your eyes.” Hence, a “transparency” theme for the new concept began to emerge.

“If you want your carrot smoothie with five other ingredients, you’re watching your carrots be juiced to order. Everything’s fresh, you’re seeing what goes into it,” he says.

Part of Sodexo’s process was benchmarking against similar smoothie concepts and seeing what they’re offering and how they’re doing it.

“We look for a differentiator,” Boerner says. “What are our customers needing that no one else is providing? What’s bothering the customer and what do they like? Then we take the best of the best.”

Some of the findings: People want natural/fresh smoothies and the biggest turnoff is puréed fruit with added sugar—that’s a trap of smoothies that people have gotten wise to, Boerner says.

“Everything today’s customer wants can be summed up by ‘Chipotle-style service,’” Boerner says. “All the ingredients are in front of you, and it’s total customer service and interaction along the way. We’d like you to place your smoothie order, enjoy the show and then it’s placed on a raised circular surface like Starbucks.”

Sodexo chefs then headed into the test kitchen and began to put the blenders to use, playing around with about 40 different recipes. They used fresh-squeezed juice, fresh and frozen fruits and veggies, chia seeds and milks made from almond, soy or cashews. Every smoothie for the new concept is vegan.

The concept, named Natural, is still in development and will pilot at a couple of operations this fall, but a test run at a hospital in Manhattan garnered rave reviews: “People were taking samples and telling their co-workers to come down and try it,” Boerner says.

“The thing I love about smoothies is that the possibilities are endless,” says George Shannon, CEC, CHE, chef instructor at The Culinary Institute of America, based at the Hyde Park, N.Y. location. “Taking flavors and mixing them together, you can end up with some unique combinations.”

Shannon shared some helpful smoothie do’s and don’ts to make sure those combinations are unique in a good way:

1. Add frozen fruit—not ice—to add thickness to a smoothie. That way you’re getting more flavor and your customers won’t be paying for a cup of frozen ice.
2. Blanch kale before adding it to smoothies. It takes away the raw taste and helps the smoothie stay bright green, especially if it’s being held for any amount of time.
3. When bananas are going bad, throw them in the freezer. They’ll thicken up smoothies nicely.
4. Nonfat yogurts can add to the textural quality of smoothies, helping them hold together and preventing raw fruit from separating.
5. Get inspired by horchata, a close cousin of the smoothie that uses rice, nuts and almond milk.
6. Use simple syrups to add flavor—sparingly. A touch of simple syrup heated with an added flavor (try mint stems) is a great way to add intense flavor.
7. Use arugula to add a kick of peppery spiciness to savory or sweet smoothies. One option is an apple-kale version.
8. Ripe melon smoothies often won’t need any sweetener. Add the tiniest hint of salt to bring out a melon’s natural sweetness even more. “This is something I learned from my dad before I even started cooking,” Shannon says.
9. Pay attention to the colors of your ingredients. “One thing I notice is smoothies with too many things,” Shannon says. “I tell my students, ‘You can make a melon smoothie, but pick honeydew or cantaloupe. Not both, because you’ll end up with a muddy brown mess.’”
10. Be very careful about letting avocado oxidize and turn brown. Add an acid like lemon or yogurt to keep it green.

Freshly made smoothies are obviously optimal, but what if the majority of your locations don’t have a blender? That was the case at a Minnesota school district, where a different smoothie solution resulted in a low-cost, two-food component offering that boosted breakfast participation.

During National School Breakfast Week this past spring, all 30 schools in the district offered a new item: orange yogurt smoothies. Some tweaks had to be made to the traditional blender-based smoothie technique.

“We don’t have blenders at our schools, but we do have 3-gallon insulated beverage dispensers with spigots,” Griffiths says. “This was an easy fix for us. Instead of mixing yogurt with orange juice in a container and pouring it—which would be more of a guess than a portion—we can fill up the dispenser with yogurt and orange juice, stir it up and quickly fill hundreds of plastic cups with lids at a time, with a better control of the required amounts: 4 ounces of yogurt and 4 ounces of orange juice.”

Smoothies could be a key player in expanding breakfast; the first day of testing the smoothies, breakfast participation went through the roof, Griffiths says.

“The kids will definitely drink it, and they can drink it quickly. They’re just getting off the bus, and it’s something they can grab, drink it fast and head into the classroom,” she says, adding that the district has high free and reduced numbers and this is a way to make sure that those who are in need are getting served something for breakfast.

“Smoothies are convenient and they meet two meal components (protein/grain and fruit) for around 40 cents,” Griffiths says, adding that with grants, a couple of blenders have been purchased for Rosemount High School, and the principal will be putting out a suggestion box for smoothie ideas from students.

Many people “love smoothies because they allow us to pack a ton of fruits and vegetables into our daily routine with ease, but we also love them because they present us with endless flavor combinations,” writes Gena Hamshaw, certified clinical nutritionist, in the forward of “365 Vegan Smoothies” by Kathy Patalsky.

“For energy/pick me up,” “a boost to the immune system,” “to provide vitamins and nutrients,” and “a way to eat more fruits and veggies” are among the top reasons that customers reach for smoothies, according to data from Mintel’s report.

However, sometimes “smoothies give the perception of being healthy, whether they are or not,” says David J. Schneider, CEC, executive chef at the University of Mary Washington in Fredericksburg, Va. So he likes to incorporate certain combinations featuring greens with natural antioxidants and spices and seeds known for their healing properties: