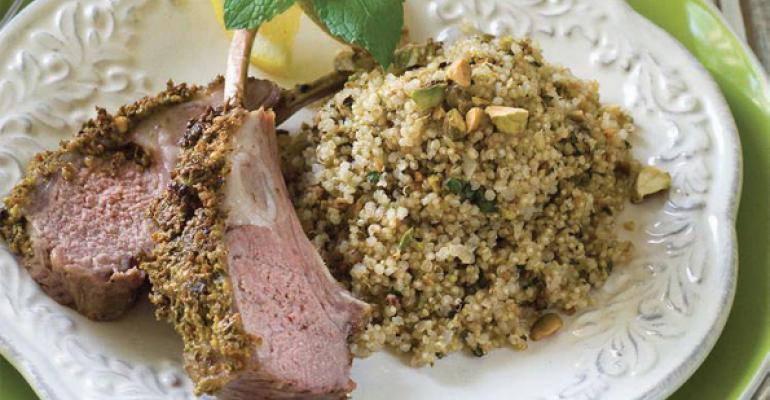 Whole Grains for the Whole Menu

Grains can add a whole lot to menus, through the dayparts and also as part of some unexpected applications that may surprise you.

For many diners, their first encounter with grains like farro, wheat berry or quinoa is at the salad bar. There are many composed salads that are made absolutely great with grains: quinoa and kale, wheatberry and mango, or a bulgur salad dressed in summery lemon, mint, tomatoes and olive oil.

And why not let grains do more on the menu? There are some delicious possibilities: A black bean and quinoa quesadilla, a greenwheat freekeh and lamb taco, wheatberry chili or even wild rice hush puppies. Obviously, the salad bar is just the beginning.

First thing in the morning, employees at Rex Health can get a strong whole-grain start with Vitality Porridge, an appealing bowl with four different grains, fresh fruit and sweet honey.

It’s a great way to start the day, especially for those participating in Rex Health’s employee wellness program, Vitality.

Whole grains are basically tops in terms of nutrition.

“They’re higher in fiber, potassium, magnesium and selenium than refined grains,” says Amanda Newton, recent graduate of the Coordinated Program in Dietetics at the University of Akron. “And fiber can help you feel fuller for a longer period of time.”

When different varieties of grains are offered in amazing ways throughout the day, this creates what Conklin calls a “whole grain culture.”

Fun and Friendly at Lunch

As the day progresses, familiar feel-good lunch items get the whole grain treatment in Rex’s retail locations. Chili and tacos are two of Conklin’s favorite ways to add whole grains to items that are known and loved already. Plus, chewier grains like wheat berry and farro “can hold up to the sauce.”

Just treating cooked grains as you would cooked ground beef, combining it with your favorite taco seasoning and then creating trendy tacos (kimchi, anyone?) will create a lunch item that’s a super easy sell.

“You can turn someone on to a grain they’ve never tried by using a familiar dish as a vessel for that grain,” Conklin says. “We started with trendy basics, like steel-cut oats and quinoa. Those things became staples. Now we’re introducing farro, grano and heirloom barley. I want to get more people to try greenwheat freekeh, which has an earthier flavor.

It has more depth than, say, quinoa, and it goes great with a citrusy dressing.”

Grains for All Seasons

Graziano has been incorporating seasonal items into whole grain dishes with a lot of success.

“In Northern New Jersey, we get truckloads of butternut squash in the fall and winter,” he says. That becomes a kind of risotto using whole grains—but with a warm Caribbean twist: coconut milk. In the summer, local tomatoes and zucchini make their way into Veggie Jambalaya with Quinoa and Barley, redolent with bayou flavor and bolstered by sturdy grains.

Fruit salad, a potentially snooze-inducing lunch item, can get a serious midday wakeup call from grains—but here’s the trick: the grains are toasted. “It adds some interest and crunch,” Graziano says. Add toasted almonds to mingle with the crunchy grains, tender strawberries and juicy melon, and it’s suddenly a fruit salad to remember. Another great fruit salad offered at Valley features multi-colored quinoa with dried fruit and a white balsamic honey mint dressing. Get the recipes at food-management.com/recipes.

Grains for the Win

Just recently, he braised ‘duck lollipops’ in stock and wine for hours, then breaded them with ground sorghum (a cereal grain). He finished the plate with a farro and couscous salad dressed with truffle oil and orange zest.

Clearly, whether grains are in a salad or part of something entirely new, they’re more than ready to take on the whole menu.

Chef Ryan Conklin, CEC, of Rex Health, is slated (and excited) to give a presentation on whole grains at this month in Orlando at the annual conference of the Association for Healthcare Foodservice (AHF). He plans to share with his counterparts from around the country his method of creating that whole grain culture.

“Getting people to try and appreciate whole grains doesn’t happen overnight,” Conklin says. “We did it by tastings and education, mainly. I took advantage of opportunities while doing higher-end catering for stakeholders in our organization.”

Events for top hospital execs would always feature at least one new grain and an explanation from the chef. In turn, those folks will help “sell it” in retail locations, by word of mouth. (“Try the freekeh salad, it’s really good.”)