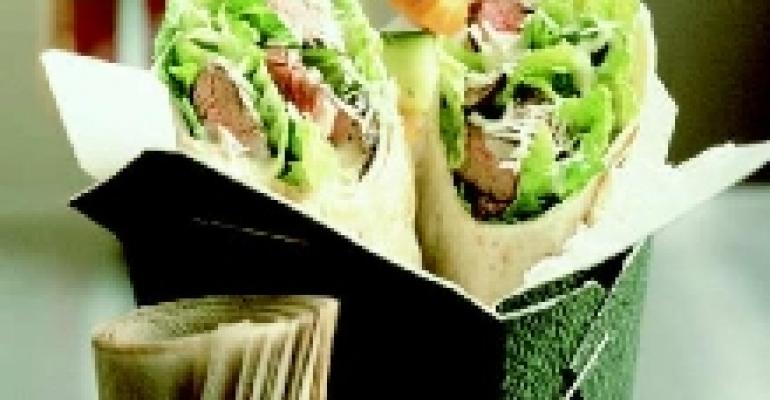 When wraps burst onto the foodservice scene a decade or more ago, they certainly had all the trappings of a fad: their sudden, huge popularity, and the tendency to take them to extremes with wild fusions of different ingredients. But they've lasted...and lasted. After all, as many cultures can attest, wrapped foods are simply a basic approach to eating, whether the ingredients are encased in tortillas or other flatbreads, lettuce and different greens, grape leaves, mint leaves, or rice paper wrappers, among others.

At this point, then, it's pretty safe to say that wraps have become a mainstream sandwich alternative in America; just one more choice that customers fully expect to find on onsite menus. But despite their staying power—or maybe because of it—wraps can still create plenty of customer excitement.

Always In Style
At three New Jersey campuses of Stryker Howmedica Osteonics (in Allendale, Mahwah and Rutherford), wraps account for about 60 percent of the business done out of Whitsons Food-service's Great American Sandwich Company concept. In the cafeterias' grab-and-go stations, wraps make up approximately 40 percent of the product mix; and in lunchtime catering orders, 50 percent of the requests are for wraps. Why so popular? It's not as if they've been newly introduced there. In fact, according to Director of Dining Services Gregory Godfroy, "wraps have been on the menu the six years I've been here, and I'm sure for some time before that, too."

The secret to their sustained sales and interest, Godfroy believes, is that "people don't want to eat so much bread. Wraps are perceived as lighter and seem not as filling as typical bread-based sandwiches. Plus, they look cool and are easy to eat."

Featuring specials, bundled offers, complete flexibility in fillings, and new innovations helps, too. About two years ago, Whitsons introduced company-wide a grilled pizza dough-style wrapper. Godfroy explains: "We start with frozen pizza dough, thaw it, take a 22-ounce dough ball and cut it into quarters (fiveand-a-half ounces each). We roll it out to one-sixteenth of an inch thickness, brush it with oil—sometimes flavored, sometimes not—and charbroil it for about 30 to 45 seconds on each side to get grill markings. Then we wrap up the fillings so that when it's served, the bread is still warm." To allow for the pizza dough wraps to be made as much "to-order" as possible, cooks have the dough already stretched and covered, ready for grilling.

Although wraps rolled up in a wide variety of tortillas (with whatever fillings a customer wants) are available everyday, the pizza dough alternative appears only about twice a week at the three cafeterias. (At other Whitsons accounts, particularly college/university sites, the pizza dough wraps are a daily offering.) Prices for wraps at the subsidized Stryker account start at $2.75, with costly add-ons (such as fresh mozzarella, roasted portabello mushrooms or grilled eggplant) boosting the price to $3.75. When bundled with a drink and dessert, prices "max out" at $4.50.

Because the wraps are made to order, Godfroy says it's hard to pinpoint the most popular varieties. "But if there's a wrap featured as the daily special, then that's always the most popular one for that day." Specials can range from tortilla-wrapped, grilled buffalo chicken concoctions to tuna steak with wasabi dressing. Pizza-dough is often the featured wrap for such specialties as grilled BLT and portabello mushrooms or a Santa Fe version with chicken, roasted peppers, corn and picante sauce (see recipes). "But you just never know," Godfroy adds. "Sometimes customers will want ordinary tuna salad in a jalapeño wrap, just to give it that extra zing."

A New Star
Although wraps have become fixtures on many menus around the country, they just debuted this past fall in the cafeteria at Ohio State University Medical Center in Columbus, where they're available both as made-to-order options in the deli and pre-prepared selections in the grab-and-go area. Results? "The wraps line is twice as long as the regular sandwich line in the deli, and we sell out of the grab-and-go wraps every day," states Associate Director of Nutrition Services Jim Warner.

Originally banking on sales of about 40 wraps a day to a cafeteria customer base of around 1,500 people, Warner notes that much to the staff 's surprise, they're selling between 175 to 200 wraps a day. "And wraps, at $3.59, are just about double the cost of a regular deli sandwich, yet take the same amount of labor to make," he says. "Plus, there's very little spoilage; very little waste." Because of the higher price and popularity, the existence of wraps on the menu has created an overall check average increase of ten cents per person for the foodservice program as a whole.

There are other side benefits, too. "The beauty of wraps is the ability they give you to combine an almost endless variety of foods, and to utilize smaller overproduction items and turn them into a wrap special," Warner explains. Thus, the well-liked taco wrap was born out of extra filling not needed for the taco salad special; and the popularity of grilled chicken wraps always guarantees quick use of any left over chicken. By far the customer favorite, however, is the Greek wrap (see sidebar), selling between 80 and 100 a day. At this point, Warner has concentrated on just two flavors of tortillas as wrappers—sundried tomato and spinach—but allows customers to choose which they want when they place their orders.

As an extra touch, cooks warm the tortillas in a tortilla press prior to adding the wrap ingredients and rolling them up. "It all adds to the intrigue of the program," Warner notes. "There's lots of motion, lots of activity, lots of flavor when you go through the wraps line. We just can't keep them in the house."