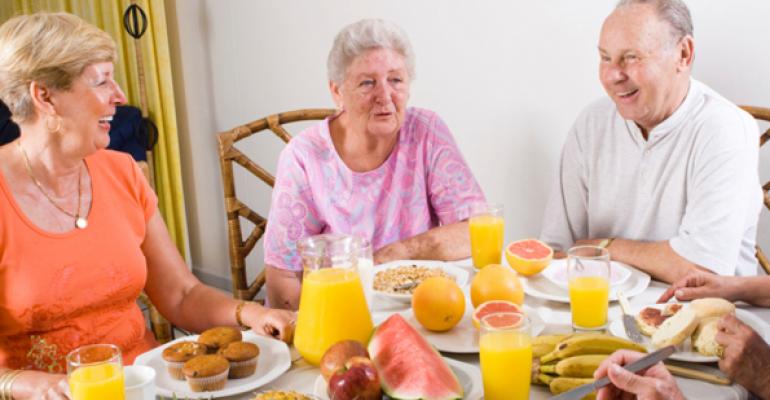 -Culture change happening in CCRCs -Putting the &#39;home&#39; back in &#39;nursing home&#39; -Continental breakfast a change for healthcare residents -&ldquo;...an exciting time in the long term care part of this industry&quot;

For long term care residents at Pennswood Village, a CCRC in Newtown, PA, breakfast is usually served in bed, at the same time every day. The trayline gets moving at 7:30 am and things are wrapping up by 8:15.

But Mary Cooley, director, and the dining staff have been getting more and more involved in a movement called Culture Change, which looks to put the “home” back in retirement homes with more of a focus on residents as individuals and a move away from the medical model.

Obviously, a major culture change can take months—even years—of planning and developing. However, breakfast seemed like a good start to Cooley. She introduced the idea of a continental breakfast, where instead of staying in bed, healthcare residents would come downstairs and eat together, along with the nursing staff.

“We wanted to get the residents to feel comfortable coming out of their rooms for breakfast,” Cooley says. “We told them to ‘come as you are’ and that it’s fine to wear your bathrobe.”

Underscoring the idea that change takes teamwork, the nursing staff’s involvement was key, she adds.

“One of the challenges with continuing care is not only getting the residents accustomed to changes, but also for dining and nursing to work together,” Cooley says.

Staffing changes for the continental breakfast meant that nurses would be working with residents to help them out of bed and down to the dining room during expanded hours: from 7 to 10 am, waffles and eggs were being made to order.

“Instead of a specific time, we told residents, ‘Come on down when you’re ready,’ and instead of assembling trays, delivering and then clearing, the staff members were helping residents actually come down to breakfast,” Cooley says. “We had 25 residents (all but one) make it down that morning.”

Nurses were encouraged to eat with residents and the continental breakfast was a huge success, and also an “aha! moment,” with more interaction and conversation, as opposed to being alone in a room.

The menu did not change, but residents were trying menu items that they never ordered in the usual breakfast service model.

“When they saw everything being made to order, they told us that they love this item, even though they never order it normally,” Cooley says. “It was a real eye opener for us.”

A group of residents in their mid-90s who are usually very quiet even made their way to the chefs involved in the breakfast and thanked them, something that Cooley says reveals the desired end result of a culture shift towards more homestyle interactions with dining services.

More breakfasts are planned, and Cooleys says she hopes this is just the beginning.

“It’s an exciting time in the long term care part of this industry,” she says.