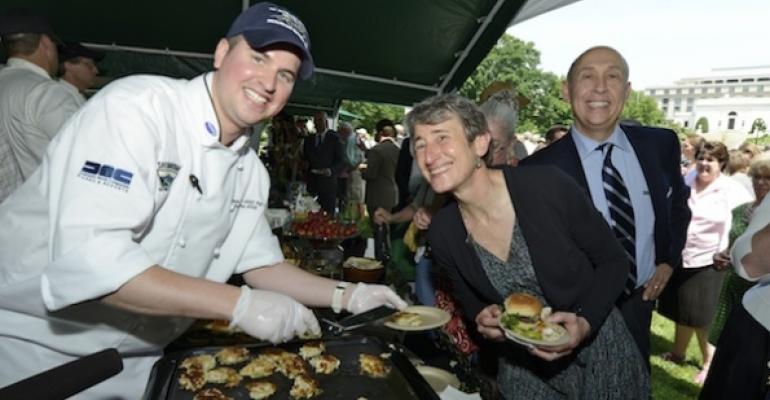 Delaware North Parks & Resorts is partnering with National Park Service in implementing the new Healthy and Sustainable Food Program for concessionaires. DNC Parks & Resorts President Rick Abramson and chefs from Shenandoah National Parks joined in the program's announcement event and sign on as a participating concessions provider on Wednesday, June 5, at the National Mall in Washington, D.C.

"Delaware North Companies has been a leader in sustainable and healthy cuisine and farm-to-table dining for nearly a decade now," said Abramson. "We are proud to work with other concession providers on bringing even more healthy options into our national parks as part of this new initiative. I know our chefs are excited to continue to bring new and healthy tastes to the millions of visitors who come to these special places each year."

DNC's initiatives are part of its Culinary Wellbeing program. Developed by a team of international chefs in 2008, it formalizes the company's commitment to serving healthy foods while encouraging outdoor activities.

Examples include sourcing 90 percent of all menu items within 200 miles at Shenandoah National Park, offering a selection more than 1,800 organic or natural food choices in the grocery department at Grand Canyon National Park and compiling over a decade of experience in developing relationships with local farms for organic produce in Yosemite National Park.

At Gideon Putnam Resort, the chef actively cultivates community relationships, including a variety of local farmers and producers. He also works with the Saratoga City School District in creating healthy student meals under the "Chefs Move to Schools" program.

DNC's theme for the June 5 event was Grow Healthy with the company's chefs serving foods that were fresh, local and sustainable. The recipe for the black bean slider was printed on green lettuce seed paper and distributed to guests to encourage them to start vegetable gardens. All food left over from the event was be donated to a local food bank.

Many of the ingredients in the offerings were sourced locally from Miller Farms Market in Locust Grove, VA, a family operation that utilizes natural and sustainable farming practices.