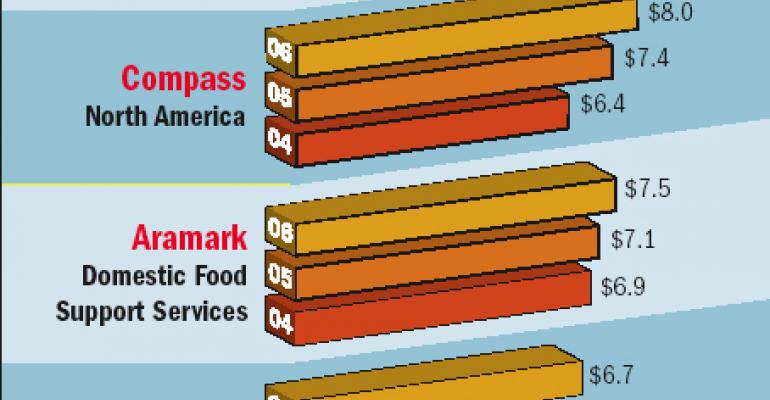 The "Big Three" and the Year That Was

When FM published its 2006Top 50 ( September issue), Compass Group had taken over the top spot from Aramark Corp., with Sodexho, Inc., remaining third. At press time, we used fiscal 2005 numbers for all three companies, the latest available at that time, as all three report annual fiscals late in the calendar year.

All three have now come in with those 2006 figures, which... well, changed nothing, at least in terms of the relative positions of the three companies.

London-based Compass Group PLC announced North American revenues of $8 billion, with a 9.5% organic growth increase from fiscal 2005, in its preliminary 2006 earnings report. At Philadelphia-based Aramark, sales for the U.S. Food & Support Services unit were $7.5 billion, a 5% jump, while Paris-based Sodexho Alliance's North American Food & Management Services unit was up 9.5 percent (5% organic), to $6.7 billion. In aggregate, the three increased their total revenue by a cumulative $1.4 billion. Here's a brief summary of each company's 2006 results.

Compass North America continues to be Compass PLC's primary growth driver, accounting for 40% of group revenues in 2006, up from 37% in 2005. With a 14% overall increase, it dwarfed the company's performance in Continental Europe (1% overall increase) and the United Kingdom (a 1% drop). The Rest of the World unit also saw a 14% gain, but its share of total company revenues is only 15% and its 3.2% operating margin—down from 3.5% in 2005—is only a little more than half that of North America's 5.7%.

That 5.7% figure is actually down 0.1% from 2005 and is less than the margins delivered in Europe and the UK, but the North American unit's 12% rise in operating profit dollars was sterling compared to the flat results in all the other units.

Among individual segments, Compass North America showed double-digit increases almost across the board, led by the 26% rise in its sports/leisure business. The company attributes this to the notable performance of its Levy Restaurants unit, in which it acquired controlling interest in April.

Healthcare and B&I both grew at a 12% organic clip, while Education (encompassing both K-12 and higher education) grew 11%. Healthcare was aided by the continued success of its Crothall support services unit to penetrate accounts.

Indeed, non-food-related outsource services was cited by Compass Group CEO Richard Cousins in the report's preamble as a future growth opportunity worldwide. He noted that the global market for support services is now worth around £700 billion ($1.3 trillion). Currently, Compass derives about 10% of its revenues worldwide from such business, Cousins added.

The one North American unit that underperformed was Vending. Compass says this was partly the result of fuel cost increases and partly due to a conscious strategy to operate on a franchising basis in markets where there is insuffi cient volume to generate acceptable profitability.

Aramark's big news of the year was the buyout that has the company once again private after five years as a publicly traded entity. Shareholders ratified the deal on December 20th, meaning Aramark will operate as a private firm for most of fiscal 2007, which began September 30th, though it will be constrained by an estimated $6.4 billion in debt resulting from the $8.3 billion buyout.

In fiscal 2006, the Food & Support Services-United States unit posted a 5% gain in sales, which represents about 64% of the company's total revenues. Operating income, however, slid 1%, to $398 million, a 5.3% margin. In contrast, Aramark's faster-growing (12% in 2006) International Food & Support Services unit racked up a 40% increase in operating income on sales of $2.55 billion. Even with the increase, however, the unit's operating margin was only 4.3%, a full percent under the U.S. unit. Because the business mix in the two units varies—Aramark's business both here and abroad is much more diversified than its two big competitors—fair comparisons are diffi cult to make.

In the U.S. Food & Support Services unit, the Sports & Entertainment segment led the way with "low-double-digit" sales growth driven by stadium and arena business that offset the continuing impact of hurricanes on convention center business. The sports-related increases were attributed to more baseball and National Hockey League (NHL) games (in fact, fiscal 2006 benefited mightily from the return of the NHL after a labor dispute that led to the entire 2004-05 season being cancelled).

The Education sector saw "high single digit" growth that came from both the K-12 and higher education segments, while Healthcare reported a slight sales increase. In Business Services, growth in corrections and refreshment services was offset by a "slight decline" in business dining services and a facilities business divestiture. He gains were attributed to increases in the K-12, higher education, sports/entertainment, corrections and refreshment services sectors, while healthcare posted a slight increase and business dining saw a slight decline.

SODEXHO reached ¤12.8 billion ($15.65 billion) in worldwide sales in 2006, an organic growth rate of 6.4%. The bump was driven by business in Latin America, Asia, Australia and remote sites, as well as the service vouchers/cards business, all of which posted double digit organic gains of around 16%. By contrast, the core business, food/facilities management services in North America and Europe, were all up around 5%. The North American and Continental European increases were driven especially by growth in Healthcare and Senior Dining, the company said.

Meanwhile, operating profit was up almost 74% in North American operations, to $338 million, but much of that was due to the resolution of some litigation and the sale of the Spirit Cruises unit. Without these two items, the increase was 7.9%, for an operating margin of 5%. The company credits strong improvement in the Education segment—where some new technology has improved productivity management—and continued success in expanding facilities services in the Healthcare and Senior Dining segments for the increase.

The operating profit increase was significantly under what was posted in the United Kingdom/ Ireland unit (158.7%), but that is a much smaller business, less than 11% of the company's total, while North America holds close to a 43% share. The Continental-Europe unit (32.5% of the company total) was much more lackluster, with a 2% operating profit increase, while the rest of the food and support services units actually dropped by 22%. To be fair, that was partly due to the writedown of the Olympic stadium in Sydney, Australia, and the loss of a significant Middle Eastern logistics contract.

In discussing its objectives over the medium term, Sodexho noted that its potential market worldwide is estimated at around ¤710 ($866 billion), about ¤250 ($305 billion) of that in foodservice. Also, it noted, the greatest growth potential lies in healthcare, senior dining, education and defense, areas where it already holds strong positions.