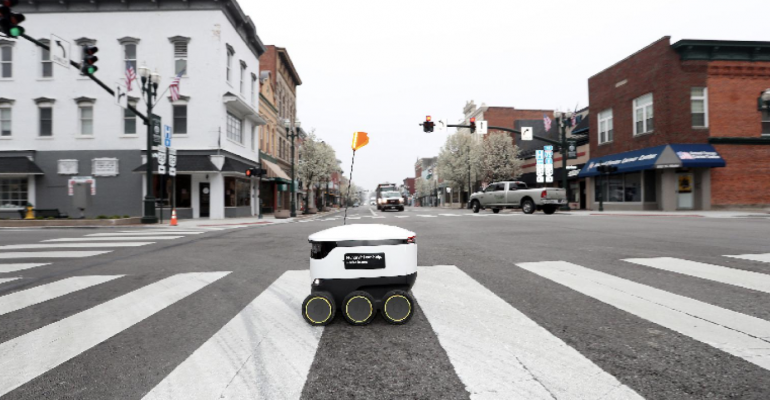 Residents of Frisco, Texas, could soon have food and groceries delivered by autonomous robots from Starship Technologies.
News & Trends

This and a potential University of California system housing crunch this fall are some of the stories you may have missed recently regarding the COVID-19 crisis.

Residents of Frisco, Texas, could soon have food and groceries delivered by autonomous robots from Starship Technologies, the firm that is already operating robotic food delivery on a number of college campuses, including the nearby University of Texas-Dallas. The importance of this extension into a city like Frisco, which is located in the Dallas-Ft. Worth metroplex and has a population of nearly 200,000, is how it can begin expanding robot delivery from a niche curiosity into general acceptance. The spread of such units into wider circulation should also begin to bring prices for the units down as economies of scale begin to kick in, potentially making them affordable for dining operations with high demand for delivery but constrained by labor costs to offer it.

“Our focus for the last couple years has been deploying this at universities,” said Starship Director of Sales Robert Buehler. “With the pandemic, a lot of campuses have emptied out of students. So we have accelerated our long-term plans, which is to offer neighborhood deliveries.”

Starship presented information during the Frisco City Council's work session on May 5 on the company’s plans to contract with several local merchants to offer deliveries through its robots.

“Frisco likes to be known for innovation, especially when it comes to transportation and technologies,” Mayor Jeff Cheney said. “We know this is the future of where things are going here in Frisco, and so we definitely want to be on the leading edge of that.”

Another emerging technology that seems to be getting a boost from recent events is the so-called ‘smart’ fridge from vendors like Farmer’s Fridge that vend restaurant-grade fare such as Cobb salads, pasta bowls, turkey sandwiches, and high-grade snacks like dark chocolate trail mix.

Farmer’s Fridge, which has units at nearly 100 hospitals along the mid-Atlantic corridor and the Midwest, found that in healthcare facilities, baskets and tickets—the overall size of any single order—are up about 14%, while off-hours transactions (typically from 6 p.m. to 6 a.m.) are up as much as 300%. The dip in consumption that typically happened during weekends has disappeared as well.

Another such firm, Chowbotics, which deploys its food-dispensing robots in 30 hospitals around the country, says that since the coronavirus, there has been interest from grocery stores that have had to shut down their salad bars, and are looking for ways of replacing that service.

Meanwhile, the Applestone Meat Co. in Stone Ridge, N.Y., which specializes in whole-animal butchery of locally raised livestock, outfitted two locations with 24/7 vending machines with its meat products. A little over a year ago, the company was selling roughly 3,000 pounds of meat a week from its machines. Now, “I’d say we’re selling [6,000] or 7,000 pounds a week,” says company founder Joshua Applestone. “We’re basically doing our summer numbers now.”

Sprinkles, the cupcake-centric chain of bakeshops known for its Cupcake ATMs, has also seen sharp growth in the last few weeks. “Our open ATMs—in markets like Chicago, Dallas and Beverly Hills—have experienced significant growth,” says CEO Dan Mesches. He estimates that the company is averaging more than a 50% gain in dollar sales and that some units are up as much as 70%.

The University of California could reopen just one-third to one-half of dorm rooms this fall in order to maintain safe distances among students amid the coronavirus outbreak, a top UC official has said, raising questions about what would happen to others without campus housing. Any reduced availability of dorms—and subsequent decline in housing revenue—would amplify the financial toll on the UC system triggered by the coronavirus crisis. The UC system was hit with $558 million in revenue losses and added expenses to its 10 campuses and five medical centers in March alone and those costs are projected to rise to about $2.5 billion by the end of the fiscal year that ends June 30, according to Nathan Brostrom, interim chancellor for UC-Merced, who also has served as systemwide CFO.

Higher education officials across the nation are grappling with how to safely reopen campuses this fall, with many of them envisioning modified access to dorms, classrooms and dining facilities, but that option is more difficult for UC campuses in tight housing markets such as Santa Cruz and Berkeley. George Blumenthal, former UC Santa Cruz chancellor who now directs the UC Berkeley higher education center, said one possibility is to bring back limited groups of students, such as freshmen, for the campus bonding experience and continue online learning for graduating seniors.

Blumenthal added that housing payments are used in part to pay off loans for construction of new buildings, so the loss of that revenue will affect UC’s ability to build badly needed residence halls. Housing projects are underway at several campuses, including Santa Cruz, Berkeley, Merced, UCLA and UC Riverside.

Read more: UC could reopen just one-third of its dorm rooms this fall

Children battling cancer hospitalized at Palm Beach Children's Hospital at St. Mary's in Florida are getting food deliveries to help brighten up their day. The organization Pediatric Oncology Support Team (POST) ordinarily provides financial, emotional and physical support for kids battling cancer, but since they can't visit the kids and give them hugs and play with them, Dr. Barbara Abernathy says they turned to food. "When COVID came along we had to pivot and created a rapid response and part of our rapid response is hot meals for young cancer patients. Once the kids in the hospitals were in lockdown, then the parent can't come and go. Kids can't get those special meals that perk up their day," she said.

Dr. Abernathy says that she tries to have food delivered every day for the kids for lunch and for breakfast whenever it's possible. "Food is connection so we reached out to local restaurants and the response has been overwhelming," she said.

After the National Hockey League paused play eight weeks ago, Nelson and his team transformed the kitchen at the Amalie Arena into a food production center for Feeding Tampa Bay. Delaware North, which provides concessions, catering services and operates the kitchen at Amalie Arena, donated all the excess food that would have been used during three Lightning home games but that proved a fraction of the meals needed throughout the community, said Delaware North Amalie Arena General Manager George Raub.

"Through those conversations with Feeding Tampa Bay, it came up that we have the culinary talent, we have the kitchen space, would we be interested in helping out and being a production center for them," said Raub. "We were happy to jump in."

Bonus: The road ahead for onsite dining: Back to school for K-12