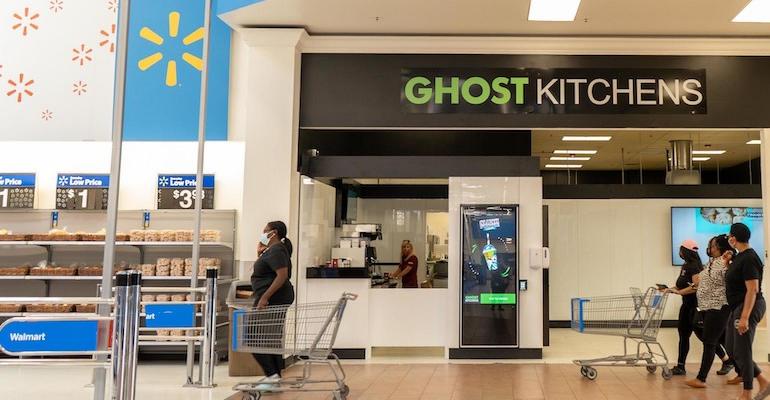 This and a high school student developing a lunch pre-order app for his school’s cafeteria are some of the tech-related developments you may have missed recently.

Walmart has opened its first Ghost Kitchen Brands “virtual food court” location in its supercenter in Rochester, N.Y. as part of a multi-state U.S. expansion to stores in Texas, California, Illinois and Georgia over the coming months and in 2022. The Ghost Kitchens service enables Walmart shoppers to select food and beverages from the menus of up to 25 national and regional restaurant and CPG food concepts, combine them into a single order submitted via touchscreen kiosks and get a text when their order is ready, allowing them to shop while their order is prepared.

Seeing long lines in the cafeteria and fellow students scrambling to get and eat their lunches before the bell rang, Aarav Navani, a junior at Evergreen Valley High School in San Jose, undertook to develop an app that would allow students to pre-order their meals while giving the cafeteria staff a better handle on demand, save money and reduce waste. He worked with the school and its nutrition services department on the app and is launching the initial version this month.

The use of robots in foodservice seems to be expanding beyond major QSR chains into independents such as La Duni in Dallas, which is using three robot units as servers, a decision forced by the current labor shortage, but which also makes financial sense, claims co-owner Taco Borga. He says each robot costs $8 to $10 a day, whereas the (currently unavailable) human servers they are replacing would normally be paid at least $10 an hour each.

The Los Angeles International Airport unveiled a new food delivery robot called Nom Nom just just before the Labor Day weekend that can deliver food and drink orders to gates throughout the airport. The touchless food order system is designed to cut down on crowding at airport restaurants.

Illustrating the trend in the commercial foodservice market toward production automation at the unit level, California-based fast casual salad chain Sweetgreen recently announced the acquisition of Spyce, a Boston-based startup founded by Massachusetts Institute of Technology (MIT) mechanical engineering students that launched in the school’s dining hall and then extended to a pair of automated restaurants in the Boston area. Sweetgreen says it plans to eventually incorporate Spyce’s technology into its restaurants, though it may take some time to scale up to the needs of the chain, which currently operates more than 120 locations across the U.S.