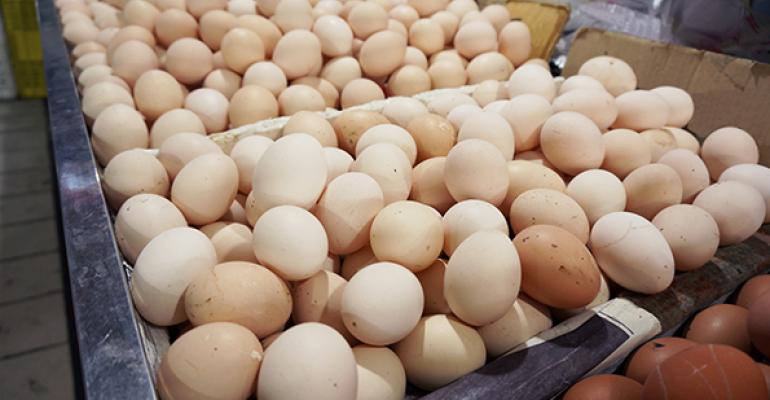 5 Things: Bird flu increases cost of eggs and the 50 best colleges for food

These and more are the things you missed for the week of May 11.

1.    N.J. schools safe from additional government mandates
In March, a bill was passed by the New Jersey legislature that said school meal programs had to at least consider cultural and dietary sensitive lunch options. The bill  didn’t make it past Gov. Chris Christie’s desk, who vetoed the bill saying it would “burden” school districts, according to an article in the nj.com. The bill was pushed by a lobbyist and her daughter who wanted more vegetarian meals.

2.    50 best colleges for food
Niche, a content producer that provides reviews and insights, has compiled a list of the 50 colleges with the best food programs. The list takes into account student satisfaction with both on- and off-campus foodservice options. Washington University in St. Louis received top billing, followed by Virginia Tech and the University of Georgia.

Read more: The 50 US colleges with the best food

3.    District superintendent, foodservice director in fight over charred food
Students in the King and Queen County Schools, in Virginia, are claiming that they are being served charred food, according to an article on wtvr.com. The district’s superintendent told the paper that the foodservice director had been suspended, but parents say the charred food issue has continued following the director’s suspension. In a battle of he said, she said, the suspended employee said the superintendent put someone in charge of the high school, where the charred food has been found, who was not properly trained and the director was told she had no authority over the new manager.

Read more: Would you eat this? Charred food served at area high school

4.    College’s cultural event backfires
Similar to reactions to several college Black History Month dinners, a recent Cinco de Mayo event at the University of Missouri has drawn ire from students. A dining services employee was spotted “wearing a Mexican costume in the school’s dining hall,” according to campusreform.com. A photo of the employee was posted to social media, prompting an apology from dining services.

5.    Bird flu is increasing cost of eggs
Ag officials confirmed this week that Nebraska had been hit with the bird flu, making it the 16th state affected. Infected poultry are being terminated before reaching the market in states like Iowa, according to an article in Time, but that means that the loss of hens—26 million since the virus appeared—is causing an increase in the price of eggs.

“A consensus of economists who work in the area is that for every million birds we lose, we’ll see about a 1.6 percent price increase,” Dr. Dermot Hayes, an agricultural economist at Iowa State University, explained to an Iowa TV station last week. “We’re looking at between a 20-30 percent increase in retail prices.”

Read more: How the Bird Flu Outbreak Is Affecting Your Grocery Bill