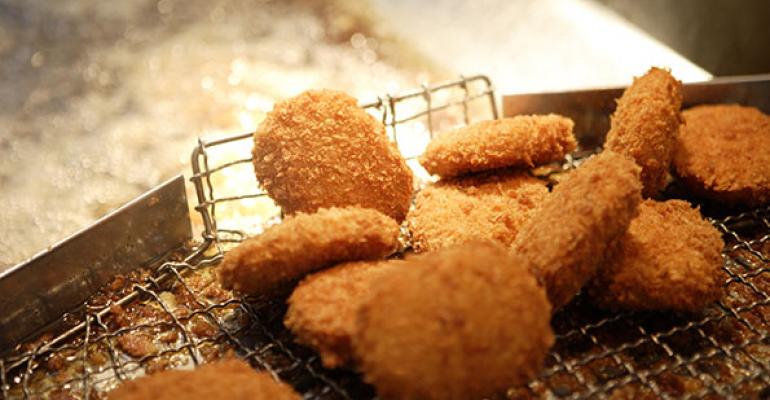 5 Things: District in hot water with the feds and fried food in Texas

These and more are the things you missed for the week of April 20.

1.    Trouble with the feds
The Elizabeth Board of Education’s foodservice department has found itself in hot water. The U.S. Attorney’s office says the district used more than $250,000 inappropriately to serve food to board meetings and other district meetings, according to NJ.com. According to a lawyer with the board, a “bookkeeping error” found the money coming out of the foodservices budget (from which federal and state reimbursement funds were used) instead of the board’s budget. The district settled the case, paying back the money as well as a $49,500 fine.

This isn’t the first indiscretion for the district’s foodservice program. According to the article, there is an ongoing investigation into a series of criminal cases, including a former school board president who falsified applications for free and reduced-price meals.

Read more:  Feds to Elizabeth schools: No such thing as a free lunch

2.    Good eats for tech workers
Competition over qualified tech employees is fierce, especially in Silicon Valley. So many companies are stepping up their game with perks, perks and more perks. One of the amenities used to lure potential employees—and keep the ones they already have on board—is a stellar dining program. The Business Insider ranked the top 10 cafés, with Facebook’s Philz Coffee taking top billing.

Read more: The 10 cafeterias that make tech workers the happiest

3.    Fried food, Texas and liberty
Being born and raised in Texas, I know firsthand how much pride Texans take in their personal liberties. This new one, however, takes the cake—literally. After removing a ban on cupcakes for classroom birthday parties, Texas Agriculture Commissioner Sid Miller wants to eliminate a decade-old ban on deep fryers in schools. Miller says schools should be able to make the decision on the local level and that federal agencies should stay out of them.

Miller goes on to say that childhood obesity rates haven’t declined in the years since the ban and the policy hasn’t worked, according to an article at kut.org.

4.    I scream, you scream, we all scream for ice cream
In another Texas-based story, Blue Bell Creameries has expanded its voluntary recall of products over Listeria concerns. According to the CDC, there have been eight cases of Listeria, with three deaths. The earlier recalls involved single-serving options, many of which end up in noncommercial operations like hospitals and schools. This expanded recall involves ice cream, frozen yogurt and sherbet produced at all the company’s manufacturing plants.

Read more: Blue Bell Widens Recall To All Of Its Products Over Listeria Worries

5.    Food truck regulations
The Iowa City Council has approved a new set of measures that designate where commercial food trucks are allowed to set up shop. The bulk of the rules affect the amount of space between the truck’s parking space and brick-and-mortar restaurants, but the council took it one step further to use the same space allotment for the University of Iowa, following clarification requests from university officials.

According to an article in the Press Citizen:
UI was seeking clarifications on the ordinance, particularly how it would treat their dining facilities, public and private. When we reviewed that issue we determined that those operations did not meet the technical definition of a restaurant, but we felt it was necessary to extend the 150-foot distance to those facilities,” Assistant City Manager Geoff Fruin. “Vending adjacent to the Pentacrest was a separate situation where the university already has a set of policies for vending. We felt it was appropriate to allow the university to continue those regulations.”