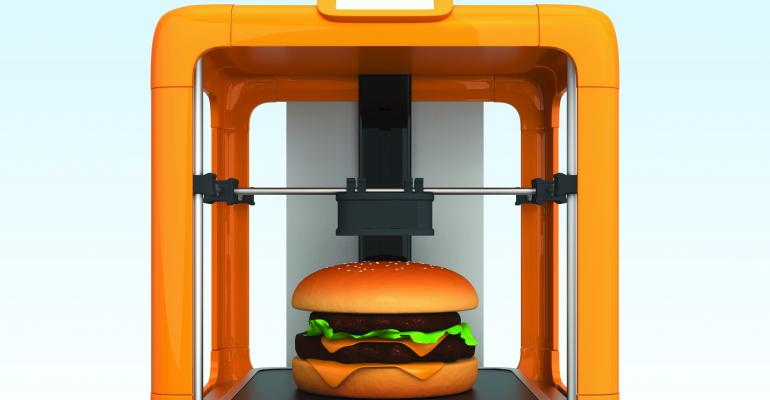 This and more are the things you missed for the week of Sept. 5.

1. Dutch patients served 3D-printed meals
A hospital in the Netherlands is starting a pilot that will serve patients meals—or parts of them—that are printed on a 3D printer. About 20 percent of patients in Dutch hospitals are malnourished, according to 3ders.org, so the hospital is hoping that 3D-printed food pastes (think purees) and food that has been enhanced with a printed layer of nutrients will help reduce that. The hospital is also trying a communal dining pilot to see if dining in groups helps patients with their food intake.

2. Consumers don’t think reformulated snacks in schools are healthier
With Smart Snacks, the USDA set forth rules for what could and could not be served in schools outside of the reimbursable meal. The goal was to make these foods healthier, and manufacturers set about to create products that met these new guidelines. So, do consumers think the snacks are better-for-you options? Not necessarily, according to new research for the University of Connecticut’s Rudd Center for Food Policy and Obesity. The researchers showed participants (parents of middle schoolers and students of high school age) four options: the original products, the products reformulated with packaging similar to the original, the products reformulated in new packaging and a healthy snack. The participants did not taste a difference in the original and reformulated snacks, but they thought that the reformulated snack in similar packaging was only slightly healthier. “The sample (of participants) believed that schools who sold the lookalike (reformulated) snacks were less concerned about the health and well being of their students,” one researcher told the Daily Campus. “The reason we did this study was because we heard from a lot of advocates that after the new USDA rules went into effect there seemed to be very few changes.”
Read more: UConn research shows food companies aren't meeting USDA standards

3. Is serving coffee to parents in the car line a business-expanding opportunity for schools?
One enterprising couple decided to open up a coffee truck in a school in North Carolina. Now while parents are waiting to pick up or drop off their kids, they can grab a cup of Joe. The couple that started the truck did so to create a sense of community and provide some much-needed caffeine, but could a school district capitalize on this idea to create an additional service option? Coffee would be out of reach, depending on the school and USDA guidelines, but what about going beyond a beverage and offering a complete meal? Most schools are already serving breakfast, many in a grab-and-go form that could be easy to dispense in a car line.

4. Seafood fraud high, report finds
Buyers, beware. If you’re purchasing seafood, it might not be what’s on the label. According to a new report from Oceana, an ocean conservation advocacy group, one in five samples tested worldwide was mislabeled. The report looked at more than 25,000 samples. It’s not just an issue of not getting what you wanted—between 30 percent and 58 percent of the fraudulent samples in the US have health implications as some of the seafood wouldn’t be screened for potential toxins and allergens if it were mislabeled. The report found that Asian catfish was the species most often sold as a different, higher value fish.

5. Murray State sets up meal bank option for students
Hunger among college students isn’t a new issue, but it sure is receiving a lot more attention lately. To combat it, dining services at Murray State University, in Kentucky, is creating a meal bank program. The initiative, which goes into effect next spring, will see dining services donating a certain number of meals that students struggling with food insecurity could then use. Students might also be able to donate their unused meal swipes to the program.