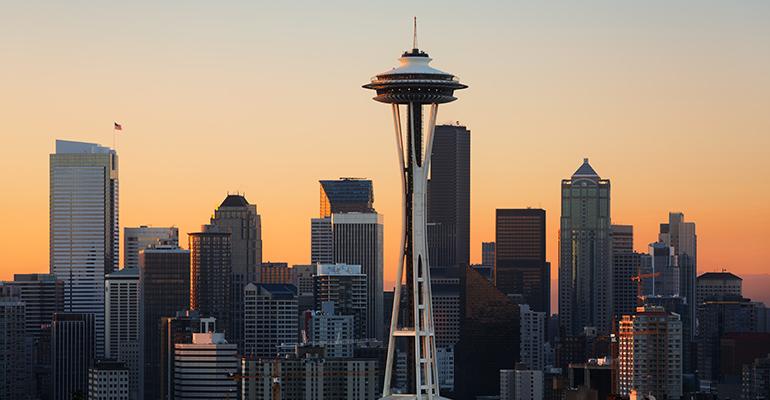 5 things: School lunch in Seattle off to a rocky start

This and more are the things you missed for the week of Sept. 23

Persistent shortages of items like bread, French fries and burgers have plagued school lunchrooms in the Seattle School District, prompting managers to form an informal swap meet among themselves to trade for missing items. They blame administrative incompetence, lack of food in the district’s central warehouse and a poorly timed and executed reorganization.

Nutrition Services Director Aaron Smith, who has reportedly lost the confidence of the union representing the district’s foodservice workers, said the first three weeks of school are not a good representation of his goals for the school food program, which include more dishes made from scratch, fresh ingredients and culturally appropriate selections.

Sodexo has renewed its $1.42 billion revolving credit facility with a new pricing adjustment that is based on the company’s performance in the area of food waste. Specifically, the adjustment comes into play depending on how the company does in reaching its goal of preventing half of the food waste generated across its operations by 2025.

“1.3 billion metric tons of food—a third of the food produced annually—is wasted or lost globally,” observes CEO Denis Machuel. “This is unacceptable both from an environmental and a business perspective. Together with our suppliers, clients and consumers, we will do our part by preventing 50% of the 117 thousand metric tons of food wasted or lost annually within our collective reach.”

Officials at The Citadel, a military college in South Carolina, said a number of changes are coming to improve the campus’ dining facility following a hunger strike by cadets that was prompted by social media posts that showed rats and uncooked chicken in the dining hall.

“Anytime that we see a problem like this, that’s not acceptable to the college, because we hold the cadets to very high standards,” said Spokesperson Col. John Dorrian (Ret.). “We ought to hold ourselves to a high standard too. Right now, the cadets are irritated at us, because we haven’t met their expectations. They are right to be irritated with us, because it’s not good enough yet, and we’re gonna fix that.”

The University of Maryland is investigating after three students were confirmed sick with salmonella. The source of the infection is still unknown, according to David McBride, director of the University Health Center, but two of the students had eaten at multiple campus dining facilities, while the third student had not eaten on campus at all. All three students have since recovered.

Major League Baseball’s New York Mets and concessionaire Aramark have announced a collaboration with secure identity company CLEAR and AI (artificial intelligence)-based self-checkout kiosk vendor Mashgin to transform the concessions experience at Citi Field, the Mets home ballpark. As part of the pilot, fans can grab snacks and beverages from the Walk Thru Bru express self-checkout kiosk, complete their purchase biometrically with a single touch and be on their way in seconds. When items placed on the unit also include an alcoholic beverage, CLEAR simultaneously verifies that the member is of legal drinking age before completing the transaction.

Read more: The New York Mets and Aramark team with CLEAR and Mashgin to Deliver the First Fully-Automated Concessions Experience in Sports