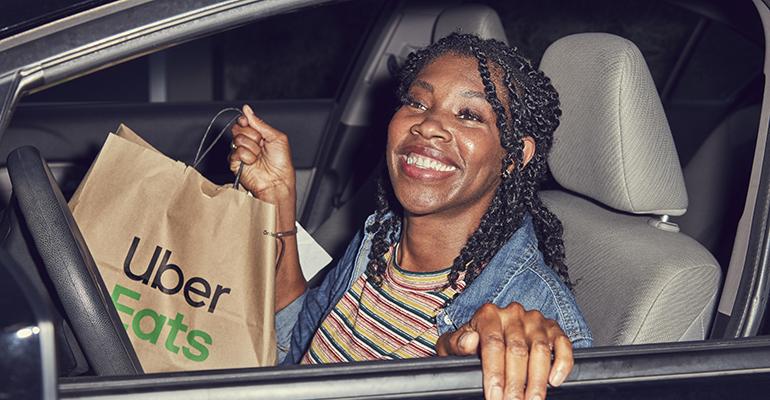 Uber
Sodexo partners with Uber Eats in Europe on meal delivery to remote workers plus four other things you may have missed this week.
News & Trends

This and a study examining food waste on college campuses are some of the stories you may have missed recently.

Research published in the journal Foods under the title "Food Choice and Waste in University Dining Commons—A Menus of Change University Research Collaborative Study" concludes that food waste in places like university cafeterias is driven not by the type of food but by how much diners put on their plates, how familiar they are with what's on the menu and how much they like—or don't like—what they're served. The student surveys were conducted during the 2019 spring and fall semesters and used photos taken by diners themselves before and after eating to measure how much food was taken and how much of it went to waste.

The global partnership between Sodexo and meal delivery service Uber Eats that lets remote workers use their Sodexo Pass Restaurant cards to order and pay for meals from some 22,000 restaurants and other retail partners has launched in France and will be extended to other European countries and Latin America in the coming months. While not expected to reach the U.S. in the near future, the Uber Eats alliance is another indication of how Sodexo is adapting to the emerging remote work and study culture, following on other recent moves such as its acquisition of Nourish Inc. and concurrent expansion of its European Good Eating Co. brand to the U.S. and its partnership with HelloFresh on providing meal kits to college students.

Read more: Sodexo and Uber Eats sign a global partnership agreement. Sodexo meal card holders will be able to easily pay for their meals and have them delivered via the Uber Eats app. Kick-off in France!

Arizona Student Unions at the University of Arizona will no longer seek Arizona Board of Regents approval for changes to student meal plans after student leaders voiced concerns about how proposed meal plan changes would perpetuate food and housing insecurity among low-income students. The now-scrapped proposal included mandating meal plans for all freshmen residing on campus, transforming all plans to a swipe system and increasing the prices of all plans.

The Food Is Medicine Coalition (FIMC) is urging the Administration and Congress to expand medically tailored meals (MTMs) programs with the ultimate goal being to make them a fully reimbursable Medicare and Medicaid benefit. In making its case, which includes a formal letter submitted to U.S. Department of Health & Human Services Secretary Xavier Becerra, FIMC cited the benefits of incorporating MTMs into treatment plans for high-risk patients and asked for interim steps that include fully funding and implementing pilot MTM programs in the Medicare and Medicaid programs and expanding funding and programmatic opportunities for medically tailored meals within Title III of the Older Americans Act.

Despite uncertainties regarding the number of fans that will attend—or be allowed to attend—Major League Baseball games this season, concessions companies serving food and beverage at ballparks are beginning to rehire and train some of the workers who were idled last season due to COVID-related shutdowns of sports and entertainment facilities. Most teams are restricted to capacity between 8,000 and 12,000 to start the season, though there are exceptions such as the Colorado Rockies and Houston Astros, which have been approved for 50% capacity, which amounts to slightly more than 20,000 seats in a socially distanced setting. The Texas Rangers, meanwhile, had a full capacity of 40,000 for their April 5 opening day at Globe Life Field.

Bonus: Innovator of the Month: Fredericksburg Schools takes meal program on the road