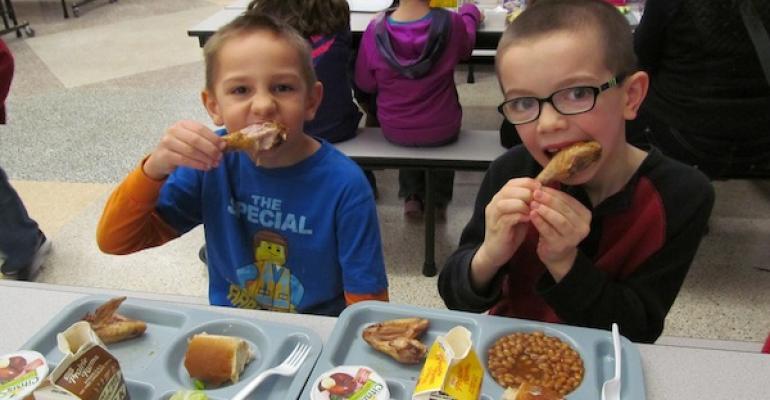 Holmen (Wisc.) Schools raised its own chickens for a special lunch event.

School gardens are so passé. If you really want to go local and give your students an opportunity to learn, give ‘em some chicks.

That’s exactly what Holmen (Wisc.) Schools has done by raising chickens that were then served as part of a special school lunch. It all started as a school project.

“We had already been getting into school gardens when one year a student who was an FFA [Future Farmers of America] member wanted to do a hydroponic system for a project,” says Michael Gasper, Holmen’s nutrition services supervisor. “My department decided to fund the project and we had been doing hydroponic lettuce for three years now.”

Then, a year ago, Gasper got another request from another FFA student: “If lettuce, why not chickens?”

The department funded the purchase of some 650 day-old chicks (in batches, not all at once) along with the equipment needed to raise them, and FFA students, working with the school’s FFA advisor, Roger King, then took it over. The project began in May and ended in November when the last batch went to the processor, which did the dirty work of turning live birds into oven-ready chicken pieces (actually, the processing company cut all the birds into eights, some of which was further cut up by Holmen kitchen staff as needed for smaller children).

Getting product from the processor, located in Utica, Minn., about 40 minutes away, back to the district proved to be a logistical balancing act because of various regulations governing suppliers and distributors.

“We asked our prime vendor if they could pick it up but they have to own the chicken to be able to transport it,” Gasper explains, “and we couldn’t sell it to them because we don’t have the insurance to do that.”

Fortunately, a local food hub called the Fifth Season Cooperative does have that insurance, so Holmen Schools ended up becoming a processing member of that co-op.

The chicken was kept frozen until needed, which was Friday, Jan. 30, when Holmen held its Winner Winner Chicken Dinner at all six of its school sites (plus a private school it provides meals for). Students were given a choice of the chicken or an alternate meal, but of course the vast majority chose the chicken. Parents and staff were also invited to join in the festivities.

The processed birds provided enough meat for about 3,000 servings, and about 2,800 ended up being served, Gasper reports. All meals met the requirements for a reimbursable school lunch. About 30 percent of Holmen students qualify for subsidized government meals.

The chicken itself was spiced with a special mixture that won a taste test in December. “We had come up with four different seasonings and I added a fifth at the last minute that ended up winning the taste test,” Gasper says. The mixture, which includes garlic, paprika, cumin and cayenne pepper was toned down for the servings intended for younger grades.

The meals also included the hydroponic lettuce grown at the schools as well as a locally produced colored potato blend and cauliflower (not local, unfortunately, but we’re talking Wisconsin in January…)

Gasper intends to make the Winner Winner Chicken Dinner at least a yearly event. “We have the equipment and the know-how in place now,” he says.

As for cost, while it’s true that the homegrown chicken ends up costing about twice as much as commercial product, “cost is not the driving factor here,” Gasper adds. “The important thing is that it has allowed us to be involved in the education process.”

In all, almost three dozen students were involved in the project, not just caring for and raising the birds but transporting them to the processor and later helping serve the lunch meal.