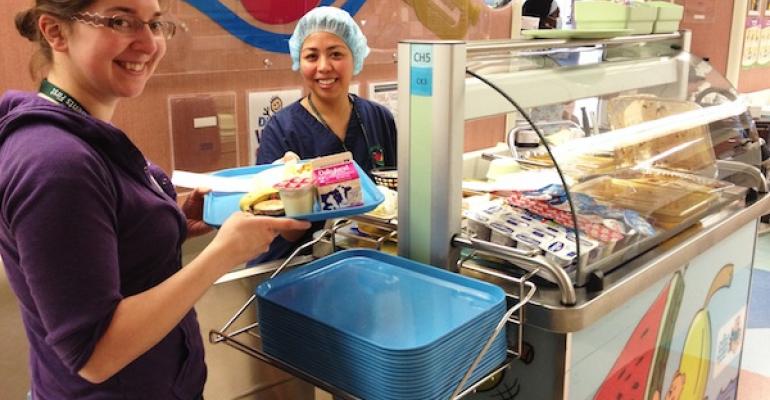 How do you get sick kids to eat? That is a question faced by every patient dining service in a children’s hospital.

At the Children’s Hospital at the Health Sciences Centre managed by the Winnipeg Regional Health Authority in Canada, they think they may have found one promising solution: mobile meal carts that visit patient floors three times a day bringing a selection of choices that the young patients can pick and choose from. The carts replace a previous system in which the young patients got meals they had pre-ordered, often when they no longer feel like eating.

“We wanted to find a way to create a child friendly service that engages children so they can see and smell the food,” says Schmidt.

The selections themselves are carefully designed to appeal to kids. “We had assigned one of our dietetic interns to interview patients about the kinds of foods they prefer when they aren’t feeling well,” Schmidt explains. “We then took that input into consideration as we developed the menu.”

Among the choices currently in rotation are lasagna, a ham and cheese melt, chicken fingers, French fries and a chicken and rice dish.

“We always have rice on the cart as part of the menu,” Schmidt says. “It was one of the things we found that sick children liked. Other things we always make sure to have is grilled cheese and a chicken item.”

Soup choices include always-kid-friendly chicken noodle and tomato selections. There is also always plenty of fresh fruit and homemade cookies.

Previously, the pediatric menu was largely an offshoot of the medical center’s adult menu, but one of the lessons of researching kids’ preferences was that while they may like some of the same things grown-ups do, they may prefer them in different forms. For example, notes Schmidt, the research indicated that while adults like cheese in wedges, kids prefer strings.

The cart service made its debut last July in one unit of the Children’s Hospital as a trial run, and it proved highly successful. By fall there was a cart assigned to each of the hospital’s four units.

The carts are attended by two full-time staffers during the day and two part-time in the evening for dinner service. Several other dining staffers have also been crossed-trained to take over when the regulars are unavailable. Because the cart attendants each serve specific units, they get to know the patients and clinical staff there and know what the preferences will tend to be.

Colorfully decorated with panels featuring the hospital’s Dr. Goodbear mascot figure, the mobile eateries spend around a half hour at each meal period in each unit.

“The children know when it is coming and many go to meet the cart,” says Schmidt. Those who are not able to leave their beds to see the day’s selections are visited in their rooms by the cart attendant with a colorful menu showing the choices. The attendant tracks the orders both to ensure that dietary restrictions are met and to make sure all the patients had a chance to order.

The food is prepared in a finishing kitchen located near the elevator to the patient floors that was secured and renovated for the purpose. The entire program, including purchase of the carts, cost around $160,000 (Canadian) to implement.

The Winnipeg Regional Health Authority is in the process of conducting customer satisfaction surveys, which anecdotal evidence indicates will be very positive. It will also conduct a waste audit to measure progress versus one taken before the carts were deployed.

Schmidt expects significant improvement in this area as well since the young patients will now only be getting what they want at the time they have their meal, rather than pre-ordered items they may no longer feel like eating. Also, because the carts are temperature-controlled, cold items not served don’t have to be thrown out.