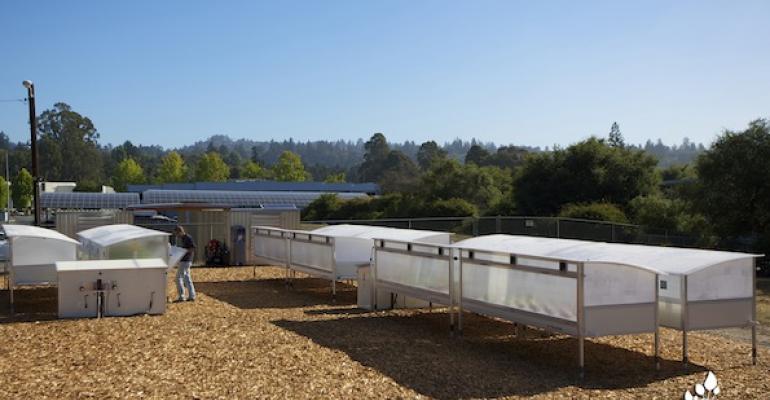 When the chef overseeing dining for the employees of Plantronics, Inc., a business and consumer audio communications firm based in Santa Cruz, CA, wants to source some fresh vegetables and greens for the next planned meal, she doesn’t have far to go. Through a joint project with nearby Cityblooms, a prototype computer-automated farm that has been installed at the Plantronics complex and is being powered by the company's existing solar energy system.

The hydroponic micro-farm, which is regulated by a sophisticated real-time remote sensor system that controls nutrients, temperature and other growth factors, produces bi-weekly harvests of premium leafy greens and vegetables for the onsite cafe operated by Bon Appetit Management Co.

"By locating these micro-farms close to the point of consumption, we measure farm-to-fork distances in yards, rather than miles," says Cityblooms Founder Nick Halmos. "We eliminate the financial and environmental costs associated with food waste and food transportation."

The partnership between Cityblooms, Plantronics and its dining services provider Bon Appetit came about somewhat fortuitously.

“We were just exiting our R&D phase and in the process of building our first farm,” Halmos says. “It was slated for installation up in San Francisco and we approached Plantronics about using some of their space for R&D to set up and test our equipment. They took a look at what we were doing, saw that we were a local company that showed some promise and basically said, ‘We’re not that interested in R&D—we want the farm!’”

Cityblooms leases the equipment to Plantronics and operates the farm through a service agreement. “They receive produce just as from any other supplier. We harvest from the bins, load them on a bike trailer and bike them the 200 yards to the kitchen,” Halmos explains.

“Right now we’re meeting all their microgreen needs, the majority of their lettuces for the salad bar, sandwiches and prepared salad station. The vast majority of the greens served in the café are from the hydroponics.”

The Plantronics hydroponic farm is located in a 1,500 sq.ft. footprint area that was previously unused space on the premises. It supplied 750 lbs. of produce to the Plantronics onsite cafe in its first two months of operation.

“We could do more if we added some faster growing crops,” Halmos says. “And we also have plenty of space to expand the operation when needed.”

Future plans call for a possible CFA (Community Focused Agriculture) outlet that would allow Plantronics employees to buy produce for home use. Cityblooms is also looking at more contracts with large organizations such as hospitals, hotels and businesses.

"We all know that fresher produce definitely tastes better," says Plantronics President/CEO Ken Kannappan. "But the benefits include better nutrition for our employees. Store-bought lettuce, for example, can lose up to half its Vitamin C in the average of five days it takes from harvest to home. Just as important, we save more than 10,000 gallons of water annually through Cityblooms' recirculation system, while eliminating environmental contamination from fertilizer run off.  Our relationship with Cityblooms has helped Plantronics operate conscientiously in a way that is consistent with our values and commitment to the environment."