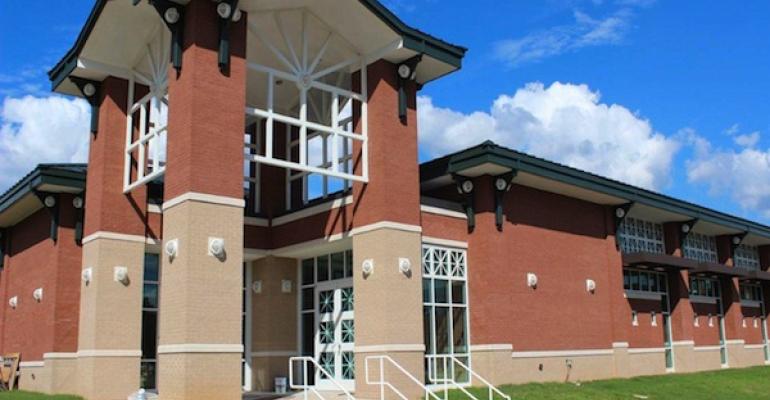 A new $7 million, 21,000 square foot dietary center has allowed East Mississippi State Hospital (EMSH) to provide patients and staff with more and better meal service than was possible in the 60-year-old facility it replaced when it opened last April. The center, more than twice the size of the previous, 8,000 square foot building, dispenses almost 1,500 meals a day to the psychiatric patients and staff on the main campus and to an adolescent complex and a nursing home at separate sites.

For the patients at the main campus, three meals a day are served in one dining room in the new dietary center, while another dining room serves a separate and more diverse breakfast and lunch menu to staff. The separate menus and dining areas are necessary because the hospital wants to provide staffers with more choice away from patients, says Rick Entrekin, director of administrative services.

"The patients typically get only one main choice at each meal," he notes.

The main EMSH campus has 120 psychiatric beds and most patients come to the dining room for their meals. The few who don’t get their meals delivered.

Another EMSH campus nearby has 50 adolescent psychiatric beds while a third campus has 210 nursing home beds. Food is prepared for each site in the new dietary center, sent in bulk to the satellite sites and plated there. The center also produces pureed foods for patients with dysphagia at the nursing home site. Neither the adolescent center nor the nursing home, which date from 2002 and 2005, respectively, have meal production facilities.

“They were both built with the understanding that production would be done at the main campus kitchen,” says Entrekin. “This was first done out of the old culinary center but it was really a strain. The new center has made this much easier because of the extra space. It is also a lot more energy efficient”

The new production facility also boasts all new equipment with greater production capacities than the antiquated units they replaced. The center is operated by contract management firm Valley Services, Inc., which was engaged around the time the new building opened.

The dietary center is just one of several new structures and renovations at EMSH. Two new 60-bed units and a medical clinic are slated to be completed by 2018, the first scheduled to open this fall. Other recent improvements included new roofs on several existing buildings.