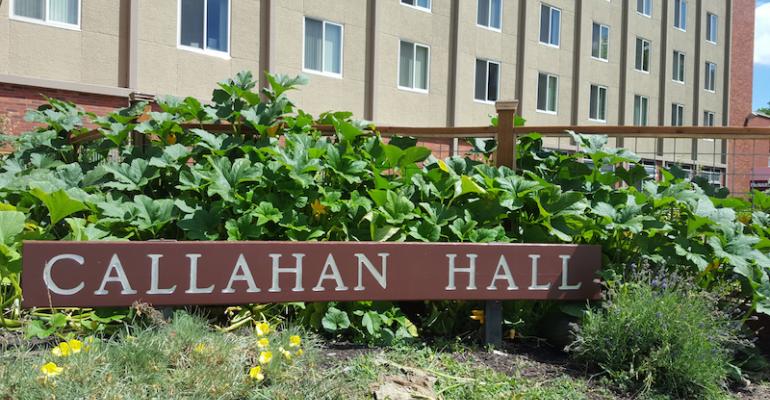 A partnership between the Oregon State University Housing & Dining Services (UHDS) and the school’s departments of horticulture and crop and soil science has produced a new organic fruit and vegetable garden that provides organic produce for some campus restaurants and retail food operations along with educational and volunteer opportunities for students. Located next Callahan residence hall, The Food Forest, first planted this spring, also provides food, shade and color to the area.

Oregon State already has organic food gardens on the edge of campus, but the Food Forest is the first such space in central campus, and was intentionally placed so students would become interested in what was growing along their path.

Jaime Herrera, executive chef for UHDS, said in a news release about the garden that food service on campus has been greatly expanding its focus on local, organic and seasonal food offerings, and working with Kreft and Pritchett has expanded that further with the chance to go into the garden and actually pick what they’re serving.

“From the cook’s perspective, the garden is an inspiring space where you can take a quick break from the kitchen,” he noted. “It sparks your imagination and revives you. It allows you to expand your offerings by seeing what’s available.”

A new restaurant called “Five Four One,” scheduled to open in September in nearby McNary Hall, will depend partially on the Food Forest and a new garden to be created on the east side of McNary, for its produce. Under the direction of chef Dale Lawson, it will offer mostly locally sourced foods based on what’s available during the year and will be inspired in part by what they find in the garden.

“One of the most exciting parts about Five Four One is the educational component,” Lawson said in the same release. “Students will be able to broaden their horizons and try new things. Beets might not be number one on their list of choices but we can provide them in an interesting way that makes them want to try it.”

Ideally, Kreft and Pritchett say, there would be an organic garden next to each residence hall on campus. While it isn’t practical for the campus to produce all of its food needs, having even a small portion grown right on the doorstep creates endless educational opportunities, and enhances campus beauty in new ways.

“The vision is that everyone has access to this space,” Pritchett said in the release. “The Food Forest is open to everyone and that’s the intention. We want people to be excited about the landscape.”