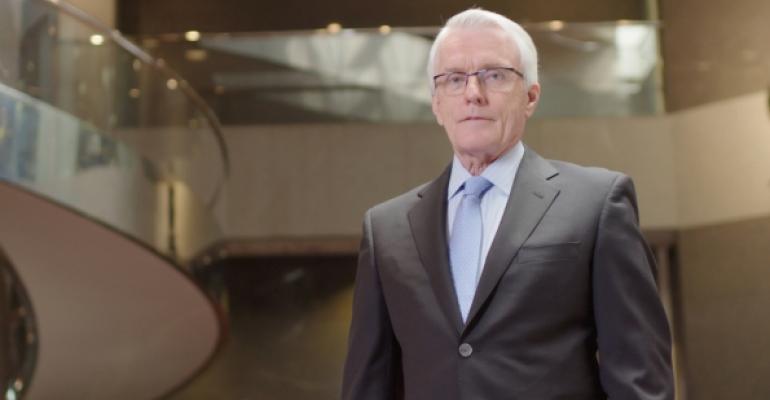 The 2016 Silver Plate winner in the B&I/Foodservice Management category says a focus on customer service remains the key to success.

Mike Barclay is a Southern Foodservice lifer, having spent his entire 40-year career with the Alabama-based company. He started as a sales rep in 1976 and is now serving as the $100 million contract management company’s first president who is not also an owner.

The only member of his family without a law degree (his wife is a retired state court judge), Barclay joined Southern after getting out of the military because he found that the company’s culture fit perfectly with his inclinations: “It was a good fit for me because I was always interested in customer service,” he says.

He credits Southern Foodservice founder and current chairman Floyd Liles with being his mentor and instilling the customer service-oriented culture in the company that so appealed to him and which he has worked to maintain and strengthen.

Southern grew steadily over the four decades Barclay has been with the firm, concentrating initially on B&I business but then moving into contracts with public clients, which helped it break into some new markets.

Today, Southern is a national company with clients from coast to coast, including a fair number of federal offices and even military installations.
Barclay took over as president of the company at the beginning of 2013 and has continued to emphasize a unit-level-based approach that treats each site as its own unique service environment. He has also grown the company’s programs in the health/wellness and sustainability areas.

Has the kind of client Southern engages evolved over the years?
Yes, but not as much by design as by just natural evolution. If you’re out in California with a couple of federal facilities, the next thing you know someone’s going to call you from some other corporation and say, ‘We know you’re doing this,’ and that I think more than the government thing probably helped our footprint expand more than any other component of it. Now we’re B&I throughout the country and I think it’s primarily related to that government business that helped take us everywhere.

What would you say are the high points of your career?
For me personally, it’s probably being handed the lead executive role in a company is up there, and I can also talk in terms of the business I’ve sold over the years. But maybe the most enjoyable thing is that we’re now one of the largest, if not the largest, companies in terms of Randolph Shepard Act partnerships [Note: The Randolph–Sheppard Act is a federal law that mandates a priority to blind persons to operate vending facilities on federal property.] To me that has been one of the most rewarding things I’ve ever been part of.

What’s your biggest client signing?
The next one! But in truth, that is second or third on our annual strategy list. First is client retention. We have some that have been with Southern as long as I have, believe it or not.

Well, they say it’s always harder to land new clients than to retain existing ones if you take care of them right…
That is a true statement but the flip side of that can be as challenging as ever because of corporate policies that say they have to put it out to bid every three or four years and at some point some young salesperson is going to throw an idea at them that gets their attention. So client retention will always be the No. 1 challenge for anyone in the B&I segment.

Are foods focused on health and wellness going to be a standard part of client expectations going forward?
Absolutely! Both of those, and sustainability as well, are prominent. To be honest, I’d have lost a bet back in the ’90s if you had told me that the healthy dining thing was going to grab a hold to the point it has, but I’m proud of all of us for changing our ways and eating healthier and living healthier. And that’s what you see. In corporations, of course, it’s to their benefit to teach their people to do that and provide the resources to help them do that, and that’s what they do with contractors like Southern.

It may be what clients want, but is it also what customers want?
Oh, absolutely, and if you’d interviewed me back in the ’90s about this, I would have said, ‘Well, maybe 5 percent of our customers are interested in that,’ and now I’d have to say 50 percent or more. And there’s some level of interest probably in 100 percent of them.

Is that the biggest difference in corporate dining now as opposed to when you started?
Yes, it is. The menu evolutions that we’ve experienced would be the single biggest change in our industry.

What would you say is the biggest challenge facing companies operating in the corporate dining segment?
Well, that’s an easy one because it is the biggest challenge I experienced in 1976 and it’s the same one today—in my opinion—and that’s human resources: attracting, training and retaining committed professionals, and particularly those committed to excellent customer service. Feeding the same people every day, you really can’t let yourself get bored because if you do, your customers will get bored with you. So you’ve got to continue to innovate and move forward.

The emphasis today on fresh preparation, generally in front of customers, also requires people who not only can interact with customers but also have higher culinary skills…
That’s another one I would never have been able to predict, but the celebrity level that chefs have moved to is really cool. They were always an interesting and unique group of people and it has led them to almost Hollywood levels now.

Is it easier now to attract the required culinary talent to work in this industry?
I don’t think it’s any easier by any means. I think it always has been a challenge. Of course the business and industry segment always had the potential to attract someone to putting together a breakfast and lunch Monday through Friday and then getting to leave at 4 in the afternoon when the kids get home from school. That has always been the one factor that has helped us pull people away from the hotel and restaurant industry. At the same time, they now turn on the TV set and see that chef with his or her own TV show and then that pulls them back in the other direction.

Do you see a significant challenge for traditional onsite foodservice providers like Southern from online restaurant ordering and delivery services?
There all kinds of things that have popped up recently and you wonder if they are going to knock you off track, but I think this is just part of the evolution of the industry and we have to change with it—and we are! We have websites now that lets you order your own food from the cafeteria that we can bring to you or you can pick up.
I really don’t have a good answer for whether [online ordering services] are going to challenge our industry, but I think in large population facilities where we have several thousand people, it would be virtually impossible to be impacted by delivered foods [from outside]. However, there certainly are smaller operations [that might be affected].

As labor costs rise, will you see more unmanned points of delivery such as micromarkets?
Absolutely. They used to have humans manufacturing automobiles, but now if you go to the Volkswagen plant in Chattanooga you will see the robots putting the vehicles together.

What is something you wish you knew when you started in this business?
Just understanding how important customer service really is in this industry. It’s an easy thing to say but harder to do.

What advice would you give to someone coming to the industry?
Just stop, call time out and ask yourself if you really are the kind of person who is serious about customer service, because dining services, particularly in business and industry, requires you to serve the same people every day, and if you don’t like seeing the same people every day or you are really not focused on making them happy every day with what you are giving them in terms of food and service, then it’s probably not a good fit for you and you need to move on into something else.