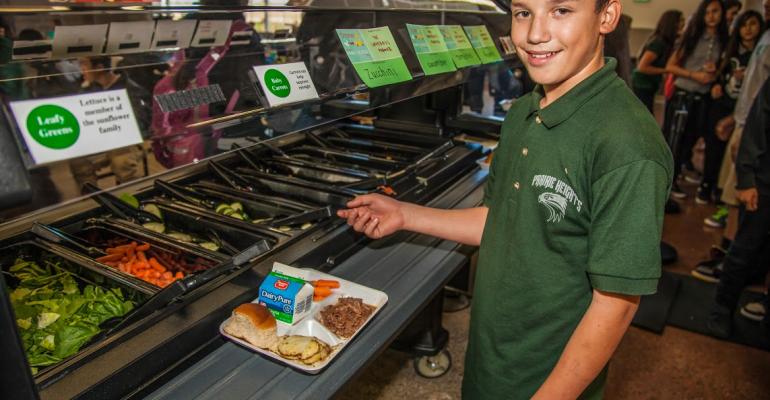 The report based on over a thousand responses from school FSDs also shows lunch participation rates are declining.

An increasing number of school nutrition programs are deploying strategies to increase consumption of fruits, vegetables and other healthy choices while also expanding student access to school meals through programs such as the Community Eligibility Provision (CEP). On the other hand, average daily lunch participation rates for a typical district continue to decline, with districtwide lunch participation dropping to 61 percent, down from 64 percent in 2014 and 68 percent in 2011.

“Just like parents, school nutrition professionals know that offering kids healthier options is only half the battle—we also have to entice them to eat those nutritious choices,” said SNA President Becky Domokos-Bays, PhD, RD, SNS in a statement accompanying the release of the report. “Despite tight meal program budgets, school nutrition professionals are employing creative tactics to promote healthy menu options as they welcome students back to the school cafeteria.”

The survey found that since 2014, when the majority of updated nutrition standards for school meals went into effect, nearly half of responding districts have implemented farm-to-school initiatives (up from 37.5 percent in the 2014 survey), 72.3 percent employ student taste tests or sampling (up from 64.4 percent) and 18.4 percent have chef partnerships/recipe development (up from 12.3 percent).

Furthermore, such initiatives are being considered or planned in 15 to 24 percent of additional districts.

School districts are also mixing up the menu, offering a wider variety of choices to appeal to diverse student tastes and dietary needs or preferences. For example, two-thirds offer salad or produce bars (up from 62.9 percent in 2014), 57 percent report offering locally sourced fruits and vegetables (up from 52 percent), 44.5 percent offer gluten-free food options (up from 37.2 percent) and well over half offer prepackaged salads, vegetarian meals and Asian/Mexican food options.

School Breakfast Program participation also continues to increase, at least partly due to innovative service models that allow students to purchase healthy breakfasts conveniently outside of the traditional cafeteria line. The survey found that nearly half of responding districts report utilizing alternative breakfast service venues such as grab-and-go breakfast kiosks outside of the cafeteria (which 56.2 percent report using this tactic) and delivering breakfasts directly to the classroom (nearly 43 percent using). Schools have also expanded summer feeding programs, with nearly 55 percent of meal programs saying they now have such programs, up from 46.7 percent in 2014.

Additionally, more than 24 percent of respondents reported using CEP, which was first piloted in 2011 and available to all eligible schools nationwide beginning with the 2014-2015 school year. These districts reported higher breakfast and lunch participation and were significantly more likely to report that the federal reimbursement rate was sufficient to cover the cost of producing a reimbursable meal, according to SNA. And since CEP schools offer free meals to all students, they do not have to deal with unpaid student meal debt, a situation faced by three quarters of responding districts.

Financial challenges continue to plague a plurality of respondents that reported that federal meal reimbursements were not sufficient to cover the costs of producing a meal in the 2015-2016 school year.

The State of School Nutrition 2016 survey was conducted in June and July 2016. The report is based on the analysis of 960 responses received from SNA members representing districts nationwide. Other notable trends tracked in the report include district demographics, school meal prices, lunch periods, food bans, equipment and technology.