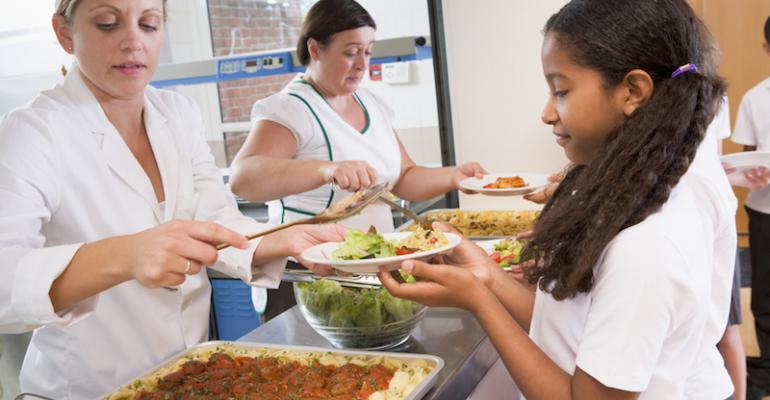 Study: USDA recipes get thumbs down from large districts

A study of USDA’s Recipes for Schools program has found that as enrollment size increased, usage of the recipes significantly decreased due to a variety of factors, including “participating in breakfast initiatives, menu planning for dark green vegetables, complying with sodium regulations, supporting budget constraints for food cost [and] meeting the trends of today.”

Among the study’s conclusions was that main dish items are by far the most frequently utilized recipe category while breakfast is the least used, probably because the database contains only three breakfast recipes. Many of the other categories received unfavorable ratings from many school nutrition directors responding to the survey for various reasons that included lack of trendiness, cultural or regional factors, student friendliness and menu variety.

The recipe database was also criticized for being unhelpful in increasingly critical areas such as menu planning for dark green and red/orange vegetables and compliance with meal pattern specifications regarding “no added sugar,” “no syrup,” and “sodium,” areas that “are especially important because the criteria for each of these items became more stringent with the passage of the Healthy Hunger-Free Kids Act of 2010…and the Healthier School Day update to that legislation,” the study notes.

Most directors also reported the USDA recipes have an unreasonable impact on food cost.

The study also found that directors from districts with enrollments of over 10,000, which together constitute a majority of the nation’s public school student population, were much less likely to use USDA recipes than those from smaller districts.

The study, “School Nutrition Professionals’ Usage and Perceptions of USDA Recipes and the Impact of Student Enrollment,” was published in the Spring 2015 issue of the School Nutrition Association’s Journal of Child Nutrition & Management. The authors are Keith Rushing, PhD, RD and J.T. Johnson, PhD. Rushing is research scientist in the Applied Research Division of the National Food Service Management Institute at the University of Southern Mississippi while Johnson serves as director and research consultant at the Center for Research Support, also at the University of Southern Mississippi.

USDA: 95 percent of districts have met HHFKA requirements
May 07, 2015