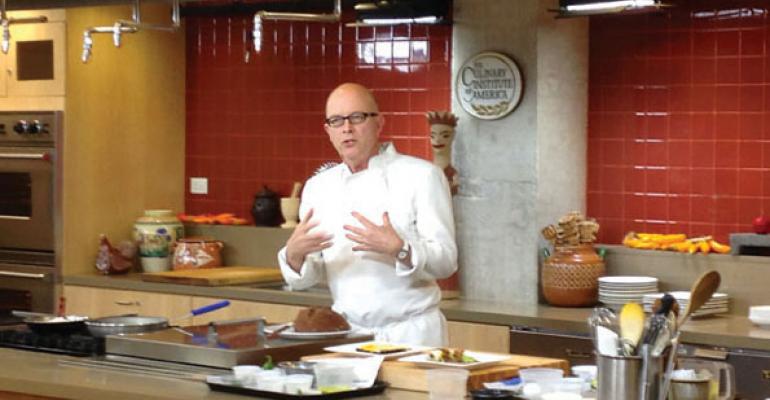 A group of innovative school nutrition leaders came together to share their stories of success at the CIA’s Healthy Flavors, Healthy Kids Conference in San Antonio.

“I hope this group can be the cheerleaders for those struggling,” said the Deputy Under Secretary for USDA’s Food, Nutrition and Consumer Services, to an audience of almost 200 school nutrition leaders invited to the event designed to promote culinary-driven healthy and flavorful foods for kids.

There have been plenty of stories about schools struggling to meet the new nutritional requirements mandated in 2012 by the USDA, but the group in attendance shared their secrets and successes.

Brad Trudeau agreed with opening speaker Kathryn Hoy, manager of Cornell’s Center for Behavioral Economics in Child Nutrition Programs, that clever and fun names were critical to getting younger kids to choose healthy and different foods. But the director of production, equipment and procurement for Dallas ISD said foodservice directors shouldn’t be the ones coming up with those enticing names, instead asking kids for their help.

David Binkle, the director of food services at Los Angeles USD, said his massive district is serving 650,000 meals a day and since the healthier requirements, will do 15 million more this year than was budgeted. “We’ve embraced the changes and we all need to for the children,” he said while demonstrating his Spinach Strawberry Splash Salad, a beautiful and tasty dish.

Lisa Feldman, director of culinary, K-12, Sodexo, joked she was more MacGyver than chef and demonstrated her resourcefulness by making a base sauce of blended white beans and Greek Yogurt that quickly became 12 variations when different spices were added. “Kids will eat anything with a dipping sauce,” she said, noting that two ounces of this sauce might satisfy a protein requirement mandated by the USDA.

The CIA introduced a new website that will feature many of the recipes and presentations mentioned from the event and plenty more resources for school nutrition workers.