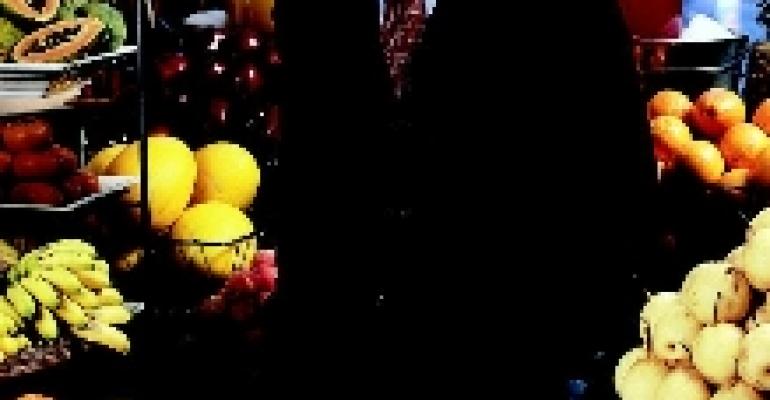 Restaurant Associates is one of the most respected companies in onsite foodservice, and, arguably, no one is more responsible for that reputation than Dick Cattani. As head of the company's Managed Services division, Cattani grew RA's noncommercial business from a couple of New York City locations in the 1970s to the nearly $300 million national enterprise it is today. And he did it while keeping an uncompromising focus on food quality, operational innovation and culinary excellence.

It is a performance that has earned Cattani the 2005 Silver Plate award for foodservice management. In making the selection, the Silver Plate committee cited Cattani's pursuit of a comprehensive "restaurant mentality" in his operations and his spectacular success at growing the Managed Services business in high-end corporate dining, education, museum, performing arts and off-premise catering segments. Under Cattani, RA Managed Services has assembled a client roster filled with some of the most prestigious names in the country, among them Time Warner, Sony Music, Condè Nast, Morgan Stanley, Lehman Brothers, Harvard Business School, the National Gallery of Art, Carnegie Hall and Lincoln Center.

The dining operations at each RA location are distinctive and highly sophisticated, each reflecting a client's unique internal culture, maximizing the location's potential as a dining venue and realizing Cattani's "restaurant mentality" vision. Food is always cooked from scratch using fresh ingredients and served with both visual flair and precise attention to detail.

When its proponents measure the quality of onsite foodservice against the best commercial restaurants, Restaurant Associates operations are often among the first examples they cite to bolster their argument. That is in no small measure due to Dick Cattani.

Cattani grew up in the hospitality business in New York City. His grandfather was an executive chef and his father was in the hospitality business. Young Dick worked in the kitchen of his father's hotel, first as a dishwasher and later as busboy in the frontofthe-house, learning the business at its most basic. In 1964, he graduated with a hospitality management degree from Paul Smith's College in upstate New York and joined Restaurant Associates as a back-of-the-house steward at the legendary Newarker restaurant at the Newark, NJ, airport.

"One thing that impressed me about RA was that, unlike the other companies that came to the Paul Smith campus, they didn't do on-campus interviews," Cattani recalls. "The presenter, after describing the company, said, 'If you want an interview, you have to come down to New York and see me.'"

In 1969, Cattani was named director of operations at Newarker. He left RA in 1973 to join ARA Services (now Aramark), where he eventually rose to become vice president of operations for the airport division.

Cattani's eight years with ARA gave him valuable experience at managing multiple sites, and it was that expertise that RA was looking to tap when it approached him in 1981 to come back and take over its fledgling onsite foodservice business.

The challenge was considerable. At the time, RA was almost exclusively a Manhattan-focused commercial restaurant operator, famous for units like Brasserie and Four Seasons. Its few onsite operations—at the Ford Foundation, the Metropolitan Museum of Art and Avery Fisher Hall at Lincoln Center—were peripheral niche interests.

So Cattani had to start almost from scratch, a task made even harder by the privately owned RA's limited access to investment capital at the time. Nevertheless, he notched some impressive wins, landing the Kennedy Center— RA's first account outside New York—soon after taking over. Other successes during the 1980s included contracts with the American Museum of Natural History, the Metropolitan Opera and the New York State Theater.

In business dining, a landmark deal with Chemical Bank in the mid-80s opened Manhattan's lucrative high-end corporate market for RA and provided a benchmark for upscale B&I foodservice the company would continue to follow and expand upon.

But its been in the last 15 years that Cattani really showed what he could do to build a business if given the resources. Once new, deeper-pocketed Compass Group, which acquired RA in 1998, gave him the means to develop a professional sales capability, market the company to a wider range of clients and have the ability to make capital investments where needed, RA's reach and business soared.

In the early 90s RA made major inroads in Wall Street financial houses and other highend Manhattan accounts. Since then it has expanded from that core market to pick up major clients in markets like Boston, Philadelphia, Cleveland, Atlanta and Miami. Among RA's most recent contract wins are Boston's Museum of Science, a UBS Paine Webber facility in Stamford, CT, the Sun Trust World Trade Center Club in downtown Atlanta and ABC/Disney, Tommy Hilfiger, Ann Taylor and Google in New York City.

What has remained constant from the lean years through today's successes has been Cattani's vision and creativity.

"We've always modeled our business on successful restaurant operations," he says. "From pre-meal meetings, which are typical in restaurants before opening the doors, to marketing efforts, business plans and keeping menus creative, seasonal and new, it's the same approach."

Cattani works hard to build talented culinary and managerial teams, scouring culinary schools and exploiting school ties to entice and retain talent. "One of the best ways to attract young individuals is to have them talk to graduates from their school who already work for your company," he notes. "It also tends to build a sense of being part of a team."

But aside from finding talent and administering effectively, a key to Cattani's success is his continuing ground-level involvement in his operations. For example, he was the key influence in introducing a unique program at the Grand Tier Restaurant at the Metropolitan Opera, in which guests can dine before the performance or pre-order for gracious dining during intermissions, a practice common in Europe. Cattani had come up with the idea after touring the grand opera houses of Europe to see what they were doing.