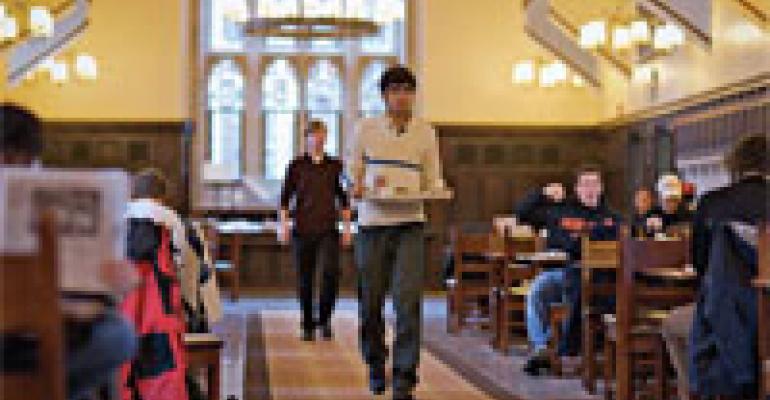 Change does not come easily to an institution that is more than 260 years old. Nevertheless, Princeton University — which was chartered in 1746 when the American head of state was a George from England, not Texas — has boldly embarked on a fundamental restructuring of its residential college system, a change with deep implications for many campus departments, not the least dining services.

This past fall, Princeton kicked off an ambitious program that will establish a series of four-year residential colleges, a first for a campus where two-year colleges have been the norm. The change is designed to keep more third- and fourth-year students in the same residential facilities as freshmen and sophomores, where the different classes could socialize and take many of their meals together in the residential dining facilities. If successful, it would represent a dramatic change from Princeton's current culture, in which most students leave the residences and stop frequenting dining halls following sophomore year.

Princeton's Department of Dining Services (DDS) is responding to the challenge by completely overhauling the way it operates residential dining, both physically and philosophically.

But as transforming as the physical changes are, it is the way the department has changed its approach to residential dining that is most striking.

Gone is a top-down approach where the dining halls were cookie-cutter reflections of menus determined centrally. In its place is a system in which the onsite chefs are in charge.

“When I started in 1992, we had one chef; now we have 14, with as many as three in one dining hall, depending on its size,” proudly notes Dining Director Stu Orefice. “And those chefs are in charge of the menu, so that instead of five dining halls all serving the same thing at the same time, the chefs in each determine what they will serve each day.”

In the process, the role of Executive Chef Rob Harbison has evolved. As culinary concept coordinator, he now concentrates on retail and catering operations, oversees all construction projects and has authority over all equipment purchases.

A Slow Process of Culture Change

The cultural change in residential dining is something Orefice had been advocating and slowly implementing even before the residential college conversion initiative made upgrading campus dining a major priority.

“When I arrived here in 1992, they had the ingredients and I brought the recipe,” Orefice says. “We had five college dining halls with snakeline counters and one cash cafeteria that closed at 5 pm. When we put in the first grill and soft serve machine in a dining hall at Princeton, we were heroes. We also empowered grill cooks to come up with one special a day and that was groundbreaking because before, each dining hall served the same menu and there were no variations.”

By 1998, all the dining halls were equipped with grills and dessert machines, and Orefice turned his attention to extending their culinary autonomy. To do that he had to place culinary direction and expertise in each, de-emphasizing the top-down control that had determined menus in all dining halls to date.

“I suggested we create entry-level chef positions in each unit to replace the senior cooks as they retired — basically eliminating a union position to create a management position.”

The path to an agreement was eased with a commitment to open some new managerial positions to hourly employees once they completed the necessary education.

“As we were adding chefs across the campus as the senior cooks retired, we came up with a program for the union where we would put unit chefs in place with a sous chef who came up from the dining ranks. We now have four hourly employees who've been promoted to management positions as sous chefs and may add one more. Eventually, in the larger operations, there would be a chef-manager, a unit chef and a sous chef — three chefs in one operation!”

Orefice also contended with the union on the issue of job descriptions. “We created a position called residential foodservice worker, something we had previously put in place in our retail operations when Frist opened in 2000 (see sidebar on p. 26) where we now have retail foodservice workers. That description lets us move someone from the deli to the pizza station, for example. We negotiated a higher rate with the union since the position is a combination of tasks, but it now provides us the flexibility we need.”

Princeton's new era kicked off in 2001, when its board of trustees approved plans to increase the size of the undergraduate enrollment from 4,700 to 5,200 by 2013, add a sixth college and establish three four-year residential colleges that would be paired with three two-year colleges.

The university had functioned since 1982 with five two-year residential colleges that gave students academic and social support during their first two years in school. However, juniors and seniors have tended to gravitate away from the life of the university, many choosing to live in upperclass housing and either make their own dining arrangements off campus or join either a food co-op or one of Princeton's traditional “eating clubs” (for more on the eating clubs, see below).

“This is probably the most significant change to the campus since we became co-ed back in the late 60s,” says Chad Klaus, Princeton's general manager for services. “The university is making a very substantial endowment investment to make it happen in terms of reconstruction, renovation, added staff and added programs. The goal is that every junior and senior feel connected to a college, and dining and food have to play a significant part in making it happen.”

The ball was in Orefice's court, and he honed in on the antiquated and inflexible facilities that had hampered his previous attempts to modernize. The first target was two adjacent colleges — Rockefeller Hall and Mathey Hall — that had been operating with identical dining facilities, neither of which was particularly customer friendly.

“The first thing I said we should do is to break the walls down between the dual colleges where you had a salad bar, a grill and three daily entrees on one side and the same food on the other side,” Orefice says.

The consolidated “Rocky-Mathey” dining hall opened last fall. Together with the new Whitman Hall complex, opened at the same time, it showed what the full flowering of Orefice's vision would look like: modern cafés with multiple stations, extensive menu choice and dishes made in front of customers using quality ingredients, all overseen by onsite chefs who run the operation as they see fit.

The openings caused a mild controversy in the early going when crowds of diners threatened to overwhelm the new dining halls, straining their capacities to the maximum. The crowds were swelled by upperclassmen who were taking advantage of a new university initiative that gives all juniors and seniors two free dining hall meals each week.

Klaus estimates that about half the meals have been cashed in, and almost every upperclassman has taken advantage of at least one free meal in the first half of the school year. The goals of the free meal program are to promote the new-look dining halls to upperclassmen thinking of moving into one of the new four-year colleges, as well as to give those determined to live away from the colleges opportunities to intermingle with the residential campus community.

The initiative ran into early opposition from the eating clubs, which understandably saw a threat to their membership numbers. That conflict seems to have been avoided with a compromise through which the university has increased its financial aid for board costs to $6,300 to meet the higher cost of eating club membership — which is over a thousand dollars a year more than the most expensive board plan. It also introduced “shared meal plans” that give students access to both residential dining halls and an eating club.

According to the agreement, which has been accepted by all 10 active eating clubs, juniors and seniors who choose to live in a four-year college can purchase a meal plan of at least 95 meals per semester, join an eating club or purchase a shared plan.

Those who choose a shared plan will pay the full membership rate at the eating club for which they sign up, and this will include access to a 95-meal plan. The split in revenues between the eating club and DDS was negotiated separately with each club.

To date, the experiment has met its objectives as 300 upperclassmen (most of them juniors, as might be expected) have chosen to reside in the new four-year colleges, a “full-fill” of the school's target quota, says Klaus. Of these, about a third have signed on to a shared meal plan, and Klaus cites the existence of that option as a reason eating club membership jumped from about 75 percent of third- and fourth-year students to around 80 percent in the new school year.

Some of the financial impact of the free meal program and the shared plans on dining services is being offset with funds from the school's endowment, though Klaus declines to reveal actual figures.

For dining services, the next capital project is another facility consolidation, the combining of the Wu and Wilcox dining halls in a manner similar to what was done with Rockefeller and Mathey. It is scheduled to open in the fall of 2009, along with a renovated Butler Dining Hall (which was closed last fall).

Orefice also wants to enhance what he sees as one of DDS's ancillary responsibilities: culinary education. He already has two successful visiting chef programs, the Garden State and Greatest Chefs of Chicago series. Each brings a high-profile chef to Princeton each year.

“We're trying to educate our students on cuisine so that, later in life, if they run into a situation where such knowledge is useful, they'll be prepared,” he says.