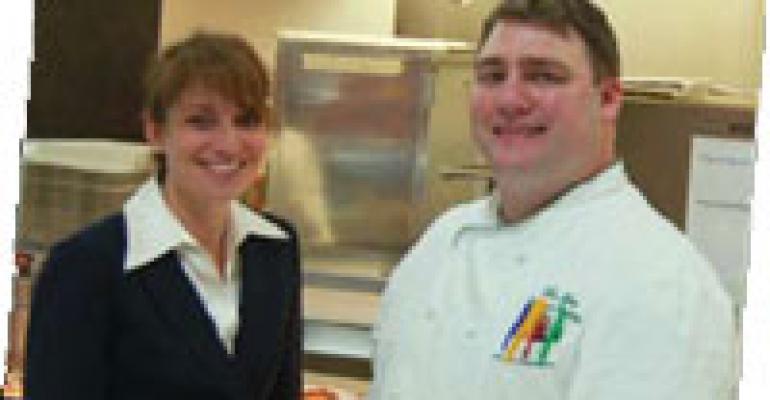 Dining at the U.S. Capitol gets an environmental makeover.

Politicians love to talk about what the rest of us should be doing to “save the earth.” Now at least one half of Congress is making efforts to put into practice what it preaches.

When the Democratic Party took back control of the House of Representatives in the fall of 2006, new Speaker of the House Nancy Pelosi, D-Cal., introduced an environmental initiative called “Green the Capitol” and made it one of her priorities.

On the recycling front, it also means there are compostable containers and servingware, recycling bins in every cafe (and soon in hundreds of offices as well), waste reduction and, eventually, new energy-efficient equipment.

Since an additional goal of the initiative is to promote “wellness” among members, staffers and visitors, the new menus also feature a host of new “healthy” dining choices and more fresh ingredients.

Working on the front lines of this progressive move to sustainability is recently installed dining services provider Restaurant Associates. RA was selected to manage the foodservice operations of the House last summer and formally took over in December. It will also manage the 550-seat cafeteria in the new Capitol Visitors Center when it opens this fall. (The Senate has the option to use the company's services as well, but has so far chosen to retain its traditional-style dining choices and remain self-operated.)

“The change to Democratic control and Speaker Pelosi's leadership changed the priorities,” says Perry Plumart, director of the Green the Capitol Office, who works under the Chief Administrative Officer (Speaker Pelosi charged the House's CAO with executing the environmental initiative). “While the Green the Capitol project involves many aspects of operations besides food, dining was seen as an area where significant changes could be made fairly quickly — the ‘low hanging fruit’ so to speak.”

RA now manages eight sites around the House side of the Capitol, including the Members Dining Room in the Capitol itself, as well as cafeterias and snack stops in the Longworth, Cannon and Rayburn office buildings nearby. It will add a ninth outlet in the fall after a contract with an independent restaurateur who operates a café in the Ford House Office Building expires.

In addition, RA works with the House's internal catering arm, Capitol Host, to provide food and beverage services to the numerous meetings and functions that take place on the grounds. Capitol Host caters some 240,000 meals a month.

All of RA's sites now feature an array of “green,” sustainable and wellness-promoting selections and practices. Product is sourced locally where possible, organic alternatives are included where practical and plenty of healthier selections are offered each day.

That is important for members, staffers and visitors who undoubtedly would like to get fresh, tasty meals without a lot of bother. Even before post-9/11 security measures made going in and out a hassle, especially for harried staffers, the lack of quality dining choices around the Capitol complex made those inside about as captive a foodservice population as your typical correctional unit.

The most altered venue is probably the Longworth Café, a large cafeteria located on the second floor of the Longworth House Office Building across Independence Avenue from the Capitol building. It now features more than half a dozen serving stations ranged along the far wall, leaving plenty of floor space in the middle that accommodates a well-stocked salad bar.

Longworth Café is also home to a generous breakfast buffet and provides numerous grab-and-go ready-made salads and sandwiches for harried-but-hungry diners. “Half the staffers who come here take out,” notes Executive Chef Thomas Green. “We wanted to make sure we have good selections for them.”

Longworth can generate sales of $15,000 a day even when Congress is not in session, and around $25,000 when it is, says Bowman. It's popularity can be seen from the numbers of customers who occupy the tables at all times of the day.

The stations include outlets for such different fare as wrap sandwiches, barbecue favorites, grill specialties, deli and hot sandwiches, pizza and pasta dishes, entrees that change daily and, as a kind of culinary centerpiece, an international station that rotates a series of almost two dozen different ethnic cuisines.

“The ingredients are fresh and authentic,” beams Green, who oversees all of RA's food operations at the Capitol. “When you get a Greek dish, for example, it is a real Greek dish with authentic flavors and ingredients. The goal is to give our customers something different from the more standard items at the other stations.”

Green says his menus are tailored specifically for his customers around the Capitol. “We take ideas from corporate menu plans that we can use, certainly,” he notes, “but our program is structured to serve the customers here.”

Nor are RA's eight sites around the Capitol uniform. Each has some distinctive touches, making them into unique destination restaurants. For example, Longworth Café has its international selections and the widest variety of stations, while the Rayburn Café, in the Rayburn House Office Building next to Longworth, features different action stations, from a carvery to a stir-fry. On the other side of Longworth is the Cannon House Office Building, where the Cannon Café offers a burger bar and specialty hot and cold submarine sandwiches.

The rest of the operations are more limited menu outlets (aside from the Members Dining Room, which is a full-service sit-down restaurant in the Capitol itself that is reserved for House members and their invited guests only). They include several snack bar type operations, c-stores and the Creamery, an ice cream shop that also features Starbucks coffees and artisan candy.

RA also revamped many of the dining outlets. Some, like Longworth Café, got major renovations, while others were refreshed with signage and other aesthetic improvements. Some equipment was added to accommodate the new menus — grills, ovens and choppers (for all those freshly chopped vegetables that replaced the canned versions).

“We plan to do more renovating next year, when we will add Energy-Star-compliant equipment to replace some of the less efficient units in place now,” says Bowman.

Among the major additions in every location are multi-bin recycling containers that are designed to separate different kinds of waste. There is a learning curve here despite detailed instructions above each station, but Bowman says customers are willing to learn. Indeed, it's not uncommon to see power-suit-and-tie-clad figures lingering over the bins, reading the signs and making an earnest effort to put everything in the right place.

The bins are only a small part of a major energy- and resource-conservation effort. From converting to wind power to generate its electricity and fuel-efficient vehicles to equip its fleet, to encouraging staffers to car pool, use public transportation or walk/bike, Green the House seeks to make fundamental changes that can serve as a national example, says Plumart.

“Green the Capitol is not only the right thing to do for a major branch of the federal government, but it provides an opportunity to send a message to constituents that this is important,” he says. “The House wants to be a showcase for green and sustainability issues.”

In dining, the bins and the recyclable servingware and takeout containers are the most visible signs of the initiative (aside from the prevalent signage touting the Green the Capitol program). Indeed, almost every non-food item except the lids for the coffee cups are compostable (RA is still searching for a viable coffee lid that doesn't start melting with the heat).

The program has other benefits besides saving landfill space, says Plumart, who notes that plastic disposables are becoming less cost-effective as the petroleum-based components from which many are made become more expensive as world oil prices rise

RA originally entered the Capitol dining picture in early 2007, when it won the contract to manage dining operations in the projected new Capitol Visitors Center. Then in August, the House decided to outsource management of its operations to the company as well, spurred by a two-year review of House foodservice operations that had documented significant dissatisfaction.

“The decision to select this company was not made lightly,” says House CAO Daniel Beard. “Restaurant Associates has a great reputation for handling food service for major corporate clients as well as for some of the art institutions here in Washington.”

The company also made a commitment to work with the Green the Capitol initiative. “They were really interested in working with us in that effort,” Beard adds.

Though RA has already operated in the nation's capital in high-profile venues like the National Museum of the American Indian and the Kennedy Center, it still had to get used to the intense political environment of Capitol Hill, where it seems that everything is political, even the cafeteria menu.

It didn't help that RA's menu changes seemed to symbolize a political change, from a heartland “conservative” one to a more “liberal” one associated with the two coasts — even though the company was at pains to retain the most popular selections from the previous era, including barbecue, burgers and the venerable House Bean Soup.

Most of the political vitriol was directed at Pelosi, though, who was hammered for “imposing” her Bay Area culinary values (Pelosi's district encompasses most of San Francisco) on captive diners. Well, maybe, though it's hard to see why conservative Republicans can't enjoy fare such as roasted chicken with fire-roasted tomatoes and goat cheese, smoked salmon with roasted beets and arugula or even the various vegan ethnic dishes — some even made with tofu! — that RA comes up with each day.

A more pressing politically charged issue is the tangle of special interests that scrutinize every detail of every move made in Washington, no matter how trivial it seems to outsiders.

“Every time you make a decision to serve one thing and not another you will antagonize someone,” says Beard. “And that someone usually has very influential friends in Congress.”

RA found this out quickly enough when some of the changes it trumpeted triggered fierce backlash. Traditional shell egg producers were not amused with the company's paean to cage-free hens, and the dairy industry bristled at the implication that the hormone-free milk now being served was somehow “safer” than before.

A more universal customer complaint, especially early on, focused on price increases, though Bowman maintains that prices have remained about the same as before for standard dishes like pizza, sandwiches and salads.

RA did introduce some new premium selections to the menu that are more expensive than what customers previously encountered, which may account for some of the perception, she theorizes. She also notes that the Fair Trade coffee now being served is more expensive than the coffee served before and, given its ubiquity, undoubtedly contributes to perceptions far in excess of its share of the overall menu.

She adds that negative comments from customers have receded lately and there are a lot more positive comments, especially about the expanded ethnic cuisine choices. Participation has also been growing, with customers now lingering longer, a development that is in line with another one of the company's goals:

“We want to give people a place to sit down and talk,” she says. “Before, there wasn't a big comfort level associated with the cafés here. People went out.”