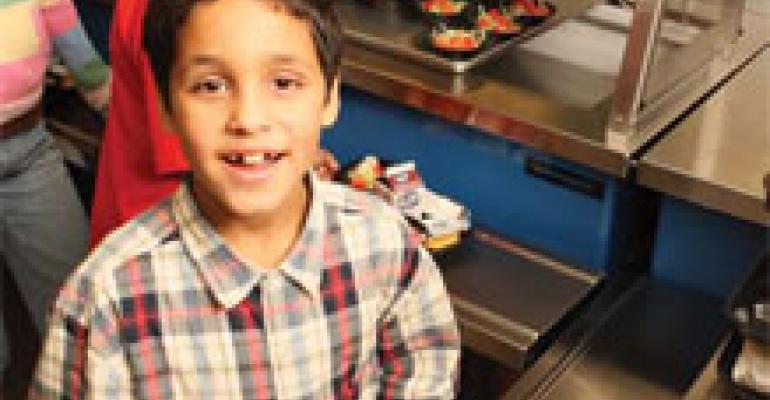 Out of the Red and Into the Black

One of the country’s largest school districts, Orange County (FL) Public Schools has historically maintained a proud independence in operating its foodservices. That threatened to change about a decade ago as problems began appearing in the previously self-supporting department and losses started to mount. Significantly, many of those problems could be traced to their aggressive approach to site-based management that OCPS had nurtured, and which, for foodservice in an earlier era, had proved successful...or at least not damaging

However, by the late 1990s, it had all fallen apart as OCPS burned through $10 million in reserves in the foodservice fund while trying to meet its day-to-day operating expenses. When the district foodservice director retired in 2000, OCPS faced considerable pressure to consider outsourcing as one way to stop the bleeding.

It was the defining moment, and OCPS ultimately chose to take a course very much less travelled. Rather than accept traditional outsourcing to a private management firm, or to cling stubbornly to its historic self-operated way of doing things, the district settled on a compromise solution—insourcing. It in effect sent out an SOS.

The SOS was a request for a consultant that would guide the district in revamping the way it operated, but would not take over actual management. The consultant eventually retained—inTEAM Associates of Santa Monica, CA—set a series of goals for the district and worked with it to implement the solutions. These included the hiring of a new food service director, Lora Gilbert, in 2003.

The result: from a deficit of $2 million in 2001, OCPS food services surged to an operating surplus of $3 million in 2004 (last year, it slipped back into the red, marginally, with a $300,000 deficit due to a larger-than-planned-for wage increase imposed by the district board).

The Limits of DIY

For years, the food service program at OCPS had operated without controversy or much notice as it quietly and successfully met its financial obligations. But like many other districts across the country, OCPS found itself impacted by the severe cuts in federal funding of meal program subsidies in the early 1980s. Fortunately, the willingness of the district to underwrite modest shortfalls cushioned the effects of these cuts.

However, in the mid 1990s, problems started appearing, and losses started to mount precipitously. By the turn of the millennium, it was clear that major changes in the way the district operated its food and nutrition programs would have to be made.

One natural target of blame was the district’s tradition of decentralized management, by which each school principal was responsible for hiring and managing all of the employees at his or her site, including foodservices. This made for a very inefficient system that realized little benefit from economies of scale or central management, since each school operated its foodservice program as in effect an independent entity.

Nevertheless, it was a strongly entrenched cultural expectation that perhaps was best summed up by Harriet Coleman, recently retired principal of Hunters Creek Middle School and long time advocate for child nutrition programs, who declared, “unless you have control of your people, you can’t succeed.”

On the district level, meanwhile, the natural top-down reflex was to consider outsourcing the district foodservice contract in order to allow a single central authority to bring synergies and efficiencies to the process. However, with the strong institutional resistance at the site level, any outside management company would face a strong counterwind.

Previous experience was not encouraging. The district had tried outsourcing its custodial services back in the 1970s, and the result was less than satisfactory to the principals and staff of the schools. That, combined with what it perceived as the failure of some recent foodservice outsourcing initiatives in other Florida counties, prompted OCPS finally to reject outside management as an option.

As it considered other alternatives and conducted a search for a new district foodservice director, OCPS tasked three veteran foodservice supervisors to manage operations on an interim basis. Angela Butler, Janet Williams and Vonda Moonier had more than 60 years combined service to the district when they assumed responsibility for the district’s foodservice program in 2001.

Unfortunately, the three soon ran up against the same problems that had bedeviled other efforts at making the foodservice operation more efficient. They ably handled state and federal reimbursement claims and reporting and assisted school managers, but it was clear that the school-based system was failing. Without central control, the district was even unable to pass federal and state reviews. Something had to be done, and done without turning to conventional outsourcing.

A Call for Help

Struggling to address the growing need for change to the program, OCPS decided to look for outside help, but not necessarily for a management company to take over the program. Joseph Basgall, COO for the district at that time, initiated the process and turned responsibility for drafting a Request for Proposal (RFP) for consulting services to Butler, Williams and Moonier. The three responded by drawing up a document that carefully balanced the competing priorities and limitations.

The first, and perhaps most important provision of the RFP was a prohibition against any “firm or consultant who is selected to perform the duties outlined in the RFP” from “apply(ing) for or obtain(ing) a position with the district for a period of 12 months following completion of services,” or “be(ing) eligible to bid on future RFPs that the Food Service Department may release for a period of 24 months.” This meant that a consultant couldn’t create a job for him or herself, or that, while a food service management company could recommend contracting out the service, they couldn’t bid to become the contractor. This provision certainly would inhibit a self-serving review. The RFP did request assistance in implementing the recommendations of the report.

The second, and equally impactful decision the district made was to write the RFP as broadly as possible, leaving open opportunities for creative and far-reaching recommendations. The Scope of Services defined the goals, but not the ways to achieve them (for the text of this portion of the RFP, see the box on p. 52)

The RFP was sent to six consultants and consulting firms. It laid out very specific guidelines on evaluating the proposals with how they would be scored, with seventy of the potential 150 points awarded based on the character of the firm and individuals involved in the project, and eighty points for the quality of the plan as it addressed the scope of services.

After evaluating the six companies that answered the RFP, the district selected inTEAM Associates, a consultancy founded in 1981 by former Fairfax County (VA) Foodservice Director and School Foodservice Management author Dorothy Pannell Martin. She was joined in 1993 by Gertrude Applebaum, former director of foodservice and then assistant superintendent for business services in the Corpus Christie, TX, schools and, like Martin, a past Silver Plate winner in the school foodservice category.

The underlying premise for inTEAM is that every school district can operate a successful foodservice program if they establish effective standards and cost control systems. In their proposal, inTEAM offered a comprehensive evaluation of the existing program and recommendations for a complete overhaul, centralizing many of the operations under a strong director.

The focus was on purchasing and menu centralization. Purchasing was being done at the site level without bids or consistent pricing, except for some items such as milk, ice cream and bread. inTeam placed more items under bid to control food costs.

“Now, the bid is very tight, sales personnel are not allowed in the schools and no purchases may be made from any other vendors,” says Foodservice Director Lora Gilbert, MS, RD, FADA, who was brought in in 2003. Orange County is now implementing a web based system for ordering and inventory.

In Team also centralized menu planning. While site managers generally planned nutritious menus, federal school meal guidelines require that meals planned meet the Dietary Guidelines for Americans. Left on their own, there was no guarantee that each site was, in fact, meeting the guidelines. And menu planning is one of the federal review standards for which a state can recover reimbursements for meals that fall short of the requirements.

“Most managers were grateful not to have to write their own menus or production records,” Gilbert says. “The only resistance was from principals who wanted managers to prepare what they wanted prepared for their teachers.”

The impact of changes in procurement and menu planning had an immediate impact, reducing food cost from 48% to 32% and saving more than $4 million in the first year.

“We wanted to streamline our menus and paper products by creating a menu that would satisfy our customers at the Middle and High school levels,” Gilbert summarizes. Focus groups and a food show where high and middle school students tested more than 100 products yielded data that went into building a customer-driven menu. The result is an almost a 10% increase in secondary school sales this year.

Another key factor, centralizing free/reduced applications, had already occured under the previous director. Previously, failure to do this accurately had made the district subject to fiscal sanctions. inTeam strengthened this with a computerized POS system in daily communication with the central office to validate claims.

Beyond these large issues, inTEAM worked with district personnel to elevate performance standards and productivity in day to day operations. For example, Applebaum, an early advocate of central kitchens, helped OCPS develop systematic centralized production methods, initiating extensive staff training on subjects like the most efficient way to make sandwiches and to set up serving lines.

A key step was the addition of Gilbert, which proved a shrewd one even though she had no previous experience in K-12 foodservice management. Gilbert learned so quickly that she won the Rising Star Award during the 2006 FAME Awards competition, a significant and prestigious honor in the world of school foodservice.

Was the effort successful? Last year OCPS passed their first federal/state review in fifteen years. Equally important, the department’s fiscal performance went from a loss of more than $2 million in 2001, to a surplus of $3 million in 2004. Last year the district lost $300,000, but this is directly related to wage increases imposed by the district board after salary negotiations that did not take their impact on foodservice operations into account. How much would that loss have been were it not for the discipline invoked by the inTEAM System?

As for the change process used, the district had very open discussions as things progressed. The successful transition came from including all relevant groups in the process. All decisions were by consensus of the many parties of interest. While there was dissent and disagreement as things evolved, one of the principals who served on the advisory panel said that everything came together in the end. As former principal Coleman says, “it would be impossible to go back to the way things used to be.”

The transition has not been without its critics. Principals, who were used to making all the decisions resented losing control over their local programs. One principal reported that he used to host a monthly dinner for community members paid for out of foodservice funds, a practice that is not allowable under federal law. Losing that kind of perk is hard for the principals. One cafeteria manager regrets the loss of her creativity in menu planning and preparation. But she also said that standardization has really improved the program for the kids.

In the end, Orange County Public Schools would appear to have made the right decision to meet its needs. It retained control over its program and their resources, and it is able to reinvest its positive net revenues in improvements to facilities that the district general fund could not have made.

Writing an RFP That Outsources Without Losing Control