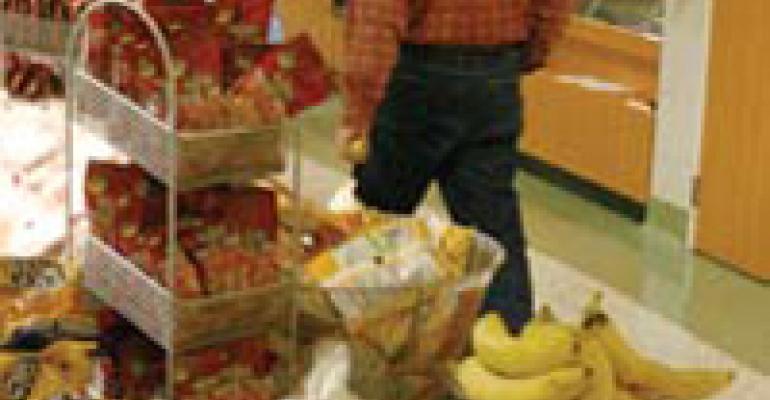 If you were looking to pick a place to stage a “Café Crawl” to let prospective patients and employees explore the subtleties of what “hospital food” is all about, you could hardly go wrong by selecting the micro-region known as the Texas Medical Center.

Deep in the heart of Houston, it’s a 37 million sq.ft. area that has one of the highest densities of healthcare facilities in the world. With over 40 major non profit institutions—13 of them hospitals—the complex employs over 73,000 people and counts more than five million patient visits a year.

It’s obviously also an area where there are plenty of places to eat. So when you hear that one of those facilities, The Methodist Hospital, is a great place to grab a bite, you put it at the top of the list. If you stop there for lunch, you won’t be disappointed, but there’s a good chance you will have trouble finding a seat.

The Market Place, Methodist’s main café, is a bustling place during peak hours. Even though it seats 350, more than half its 5,000 retail transactions a day occur during the lunch period. A large percentage of the meals are sold and packaged for takeout and consumed elsewhere. It’s a busy place.

“At noon, you actually can’t get in,” observes Roberta Schwartz, a vice president of operations who has had oversight of Methodist’s food and nutrition services department. “You see badges from all the surrounding hospitals worn by people who come here to eat,” she says proudly. “We are setting the standard.”

A Story of Disaster Recovery and Commitment
Given the café’s “business as usual” lookand- feel, it’s hard to believe that, just a few years ago, this was a foodservice department that was under water in the most literal sense of the expression.

In 2001, flooding from Tropical Storm Allison completely destroyed the kitchen and servery facilities and significant other parts of the hospital. In the aftermath, a major reconstruction effort set the stage for building a new production kitchen and expanding the retail café.

It was a time of many other changes as well. Hospital administration had been considering a move to a room service model for patient foodservice and established that as a goal once facilities had been restored. It made a decision to outsource foodservice operations and signed a contract with Aramark, which had been managing the hospital’s facility services since 2001. As part of the kitchen reconstruction, it also decided to convert food production from what had been a largely cook-chill system to one that retains some cook chill elements but now is primarily cook-to-serve.

The expanded Market Place café opened in March of 2004 and was recognized as one of FM’s Best Concept Award winners a year later. Since then, its retail revenue has grown over 45 percent, with further expansion now on the drawing boards.

Methodist’s story is one of a highly successful disaster recovery effort, but also one of simple commitment to employee, visitor and patient satisfaction and the role foodservice can play in contributing to that result. The hospital was No.9 on Fortune magazine’s list of the “100 Best Companies to Work For” in 2007 and is regularly named one of “America’s Best Hospitals” by U.S. News & World Report.

“Our patients come here to receive treatment, to get cured or to get information,” says Schwartz. “They are often here for days at a time and are visited here by family and friends and want this to be a welcoming environment just as much as they want it to be a place of healing.

“It is very clear in our Press Ganey evaluations and other surveys how often patients mention the food and that they notice the quality of things like meals, decor, and how clean and comfortable the rooms are.

“The same thing applies to our employees. We have been successful at attracting quality people to join our staff and stay here, but we also know that all healthcare institutions will be challenged in this regard in the future. We are committed to providing a level of services that helps them feel they belong here.”

A High-Traffic Café Design
That kind of commitment from administration clearly plays a large role in developing top quality foodservice offerings, but it doesn’t eliminate the physical and operational challenges inherent in doing so in a hospital setting. Methodist sought to address many of them in the planning and design process the reconstruction effort entailed.

Expanding the retail café offered obvious advantages given the hospital’s continuing growth, but also plenty of logistical issues. One of them was the existence of central mechanical shafts in the center of the new space that could not be re-located. According to Robert Rippe, the foodservice consultant commissioned by Methodist to design the new facilities, that and the high traffic demands were the reasons the café was designed to permit traffic to move through the space in a circular pattern in both directions.

Other key design goals were station placements that would give customers multiple points of service where they can obtain major meal components, and the use of fixtures with flat space for display purposes and their storage underneath.

Snack displays were incorporated into virtually every station to permit merchandising of convenience add-on items. For flexibility, almost all equipment is mobile and many units, like the sauté range, wok and broiler, have gas quick-connect fittings so they can be moved to alternate stations as needs change.

Because primary kitchen production and prep continues in the basement, it isn’t feasible to resupply the stations from there during peak times of operation. Instead, lots of walk-in refrigeration space was built-in behind the café’s major stations to support the finishing work that takes place behind the counters.

In general, the café appears to be larger than it actually is; the servery, including behind the counter prep areas, is just over 6,000 sq.ft.. Hours of operation run from 6:30 a.m. to 2 a.m., with some stations shut down during the slower periods.

The Bistro, a second major point of retail service, operates at the lobby level of Jones Tower on the other side of the facility. It offers a refined, casual dining environment and is open from 6:30 a.m. to 4:30 p.m.. Serving mostly hospital employees, the menu includes fresh brick oven pizzas, two soup selections daily, fresh salads tossed to order with a choice of protein, and a wide variety of grab-and-go offerings. Seating space is modest and can handle about 30 customers in booths and at tables.

The main kitchen runs two tray lines; one provides room service meals to over 500 patients each day and the other provides select meal service to ICU patients and others where room service isn’t feasible. A tightly-managed ingredient room contributes to overall efficiency and ensures that, in most cases, everything a cook needs to prepare a recipe is already selected, weighed and assembled beforehand.

The kitchen is also home to a full-blown bakery that provides a wide selection of pastries, desserts and specialty items to the retail operations and for catering needs.

Texas Toast and Other Traditions

“In its mission statement, Methodist has a goal of offering the highest quality in care and service,” says Vanessa Robinson, the Aramark foodservice director who oversees the operation. “That was one of the drivers for the move to room service and also part of the desire to grow and we could offer a wide variety of food options to the employees.

“What we contributed was to significantly improve upon the merchandising and to add more effective variety and production efficiency to the mix.”

A 20-year veteran in healthcare foodservice Robinson came to Methodist near the end of 2004, about six months after the new café had opened and when Aramark assumed responsibility for operating the foodservices.

Robinson is the first to acknowledge that the new café’s design played a major part in providing the flexibility to make retail operations as successful as they have since become. Seven primary stations enable a wide menu variety of daily fare that ranges from Asian and Mediterranean cuisine to sandwiches, salads and rotating comfort foods.

The management team made three major changes to the concept mix. The first was to build out an existing sushi counter, which is operated by a local entrepreneur. Its expansion permits more effective merchandising of the fresh-produced product and enhances the ongoing display action there. A second decision was to add a tortilla station where customers select the ingredients and where staff then prepares the final product to order.

The third decision was a home run—a custom-developed concept simply called The Smokehouse “that is pure, Texas barbecue,” Robinson says. She credits Will Hacker, assistant director of nonpatient services, with coming up with the concept, developing its menu and designing the station and look.

The Smokehouse is often the busiest station in the café “and is a good example of how a custom concept can really make your customers feel like the café is operated just for them,” says Robinson.

Every Last Corner
One of the most significant impressions you have as you move through the servery is that grab-and-go foods, snacks and impulse items are merchandised in every last corner and level possible.

From high spots to low, every time the eye rests it is upon a neat stack, a well-filled basket, a shelf arrangement, an angled plate.

“People eat with their eyes, and we’ve tried to make merchandising something that is part of our operational culture,” Robinson says. “It’s not just about impulse purchases, but they are an important part of the mix.

“This is a fast-paced, teaching hospital. Sometimes, customers do not have time to get a full meal or just want something to take back to their desk. It’s important that we provide choices for those who can’t use the standard sit-down meal option.”

On the other hand, “We want it to offer a place of respite for employees who need it and to create some fun for them with various promotions.” In this regard, Methodist works with the hospital’s marketing department, which partners with several major Houston sports teams and is often able to provide game tickets that can be given away in café promotions. Many of these are scheduled in advance, but Robinson is also a believer in the taking advantage of promotional opportunities that arise unexpectedly.

Such efforts have contributed to the very impressive results achieved since the new facilities opened. The café’s first year revenue of $4.6 million has grown every year since and is should hit $6.7 million by the end of 2007.

On the patient side, inpatient meal scores from Press Ganey show that, in its peer group UHC hospitals, Methodist has consistently performed above the 90th percentile for the last three years. And among 600+ bed hospitals, it has several times scored the group’s highest section mean score.

Expansion and change continue unabated at Methodist and the department is planning now to help accommodate a new research institute that will soon open across from, and connect with, the Market Place café. That will temporarily mean a loss of seating. And three years from now, a new outpatient facility will open across the street. Robinson looks forward to the new business opportunities, but says the goals will not change.

“We are not just a foodservice department— we are a place people come to relax, to enjoy a respite from their workday,” she says. “Methodist’s patient expectations are that the experience here will be top quality, and our belief is that the same expectations should hold true in the foodservice arena.”

From Cook-Chill to Room Service on Demand
The New Contract Director: Letting Your Guard Down