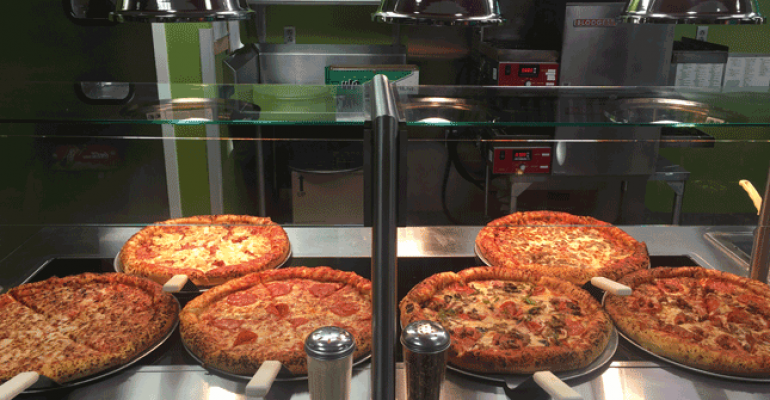 <p>Pizzas from a recently opened pizza/pasta station are one of the dining options in the Huntsville cafe.&nbsp;</p>
Operations

Huntsville Hospital, one of the largest hospitals in the U.S. by bed count (881, including the adjoining Hospital for Women & Children), has made it easier for busy staffers to get lunch with a delivery service that promises food from its catering kitchen within 45 minutes at no extra charge between 11 a.m. and 2 p.m.

The lunchtime delivery service lets employees call in orders or go online using their badge number, and currently generates up to $250 in extra retail sales a day for the department.

“The tickets come and print to a place in catering and a person prepares the food,” explains Cedrick Junearick, director of food and nutrition services. “We deliver across campus at no charge, and it’s been ticking up steadily.”

The menu ranges from steaks, chicken and gyros to salads, pizza and wings, all prepared in the catering kitchen, which is underutilized around lunchtime, Junearick adds.

“Catering events are slow then as we just drop off and come back, so [the regular catering staff] can help out” with the employee delivery program, which is staffed by one cook and two part-timers.

The deliveries are promised within 45 minutes of ordering “but the goal is to get it there in 30,” Junearick says.

The main retail outlet is a four-station café that includes Smokehouse 256, a barbecue concept with its own smoker that turns out brisket, ribs and pulled pork accompanied by sides like fresh greens and jalapeno corn bread.

“We also run wings out of that station with about 10 different sauces, some of which we make here,” Junearick adds.

The café used to have several stations operated by local restaurant brands but only one remains: Sakura, a Japanese concept that specializes in fresh sushi made each day in front of customers.

The space occupied by another outside brand, the Mama’s Italian concept, was taken over earlier this year by Fiesta Bowl, a self-branded Mexican concept similar to the commercial Chipotle chain in which customers get made-to-order customized quesadillas, burritos and burrito bowls with ingredients like brown rice, guacamole, salsa verde, and various protains and vegetables.

“We had looked around to see what comfort food-type things were trending and that was [chains like] Chipotle and Mo’s, so we took that concept and kind of created our own version of it,” Junearick recalls. “It’s going well. In fact, the sales [at the space] are better than when we had Mamas while reducing labor costs.”

A new pizza/pasta station, replacing the Italian food gap left when Mama’s was removed, offers assorted specialty pizzas, strombolis and calzones as well as pasta bakes made with ingredients like shrimp and meat sauce and a choice of long and short pasta as well as gluten-free noodles, all run through the pizza oven for a fresh sizzle. There are also gluten-free pizza options and a gluten-free Alfredo sauce option for the pasta.

Junearick says the population asking for gluten-free isn’t huge but needs to be accommodated. He estimates about 45 gluten-free orders a day on average.

In addition to the main café, Huntsville Hospital has seven auxiliary retailing outlets scattered across the complex. All feature We Proudly Brew Starbucks beverages along with various packaged snacks and beverages, and grab-and-go salads, sandwiches and parfaits.

One includes a grill that serves gyros, burgers and hot dogs, and another one, located near the wellness center, makes fresh juices and smoothies. Most of these outlets close by 5 p.m. except for the one serving the hot food, which stays open until 3 a.m. and another one located in the Women’s & Children’s Hospital, which is open until midnight.

Patient dining has room service in one part of the complex and a modified room service choice in the main hospital in which associates take bedside orders on tablet computers before each meal period.

Huntsville Hospital had contracted its dining operations until 2009, when it decided to self-operate with Junearick as head.

“I was executive chef at the time and so was the face of the operation,” he says. “I already knew the people and the systems and how to bring food back alive here.”

A graduate of Johnson & Wales, Junearick spent over a decade in the military as well as some time in hotel dining and his own business before joining up with the contract company that operated at Huntsville Hospital.

His goal now is to boost the healthy profile of what is served.

“We’re in the process of developing a healthier menu. I think our customers will really like how we’ll be incorporating more grilling and sautéing and more grains,” he says. “We’ve already moved some fryers out, but [that process is] not complete yet. Our biggest challenge will be removing the fryers from our grill area.”

He is optimistic that further changes will be accepted.

“We pulled fried chicken and fried fish off the menu about a year and a half ago and while I got some resistance, for the most part it went over well because we found a good recipe to oven bake it.”

There are also fresh juices and smoothies in the café each morning and quiche on Tuesdays and Thursdays.

“If a customer wants to eat healthy, they definitely have the opportunity to do it here,” Junearick says. “While I haven’t taken out the 20-ounce bottled drinks as they are great part of my sales, I have reduced the size of fountain drinks to 12-ounce drinks so people have options.”

“People will adapt to change and will learn to adjust,” he says, “but your sales have to adjust at some point as well. Being in this type of environment, our duty is to try to serve a healthy product and also help educate people even though they work in a stressful environment.”

Monroe Community Schools goes to all pre-order with some assembly required for remote meals
Jun 01, 2021