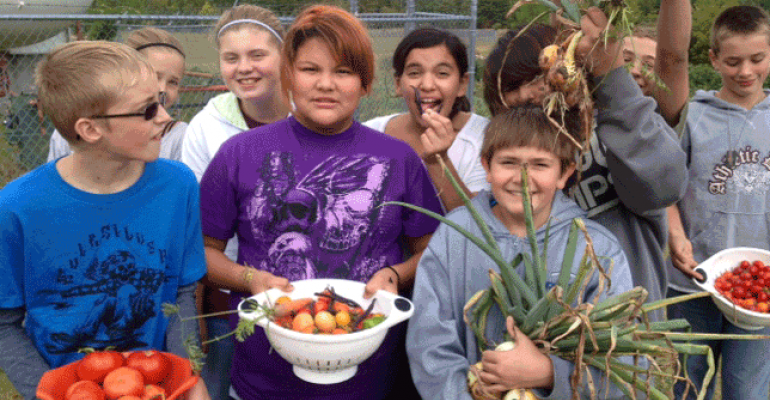 They were whooping it up in the Kelliher School District 36 last November when half a dozen VIPs from the state departments of education and health, as well as the USDA, showed up in the district’s single building to acknowledge Kelliher’s status as the first in the country to win a Gold Medal of Distinction in the USDA’s HealthierUS School Challenge program, which recognizes achievement in improving students’ health and nutrition.

The celebrations at the tiny district of 260 K-12 students, located on the outskirts of the Minneapolis-Saint Paul metro area, included a poster contest, dress-ups and a special pre-Thanksgiving meal cooked up by the dining team that had helped Kelliher win the award.

The HealthierUS School Challenge requires districts to promote healthy eating and exercise, and awards them according to the amount of progress they make. Kelliher earned its high distinction by relentlessly pushing healthy fare like fruits and vegetables, as well as whole grains and lean proteins, to its age-diverse population in which upwards of four in five students qualify for free or reduced-price meals.

One mainstay of the healthy dining encouragement is the salad bar the cafeteria installed three years ago, says Foodservice Director Justine Nistler.

“We have an array of fruits and vegetables and try to get as many as we can that look fresh and colorful,” she says. “It’s the first thing students come to when they get in line. When they grab their plates and enter the salad bar area, they are encouraged to choose fruits and vegetables. And once they’ve gone through the serving line, then at the end, before they punch out…they can choose another fruit from a fruit bowl there. And that seems to be a good way to get them going on it.”

The salad bar itself offers a choice of up to six items ranging from a mixed salad with spinach and different lettuces with various toppings like tomatoes, broccoli, cauliflower, peppers and even jicama to one canned fruit and one fresh fruit selection each day.

Canned and fresh fruits are also on the main serving line at breakfast time, which gets unusually large participation—about 75 percent on a given day. The older kids—grades 7 to 12—can get grab-and-go breakfasts while the younger students sit and eat in the cafeteria. Breakfast in the classroom is available only in the pre-school.

For unusual items like the jicama or star fruit that may be unfamiliar to the youngsters, the dining team offers taste-test samples.

Also helping encourage kids to try different things is the school garden, says Superintendent Tim Lutz. “I think for example that if they picked a beet [in the garden] students might be more willing to try it.”

In addition to beets, the garden has produced crops ranging from apples, tomatoes and grapes to carrots, potatoes and squashes.

“We have four or five different kinds of squash,” Lutz says, “and one year, we had enough to serve it once every other week until Christmas.”

Unfortunately, the school garden remains a major source of locally grown product due to the district’s location.

“A handful of times, we’ve been able to use local apples, but we are pretty much a food desert, especially when it comes to fruits,” Lutz explains.

On exception is wild rice, which is grown by a number of area farmers and is a favorite among students, about half of them Native Americans for whom wild rice is a staple. Dishes served in the cafeteria in the past year have included wild rice cream soups—“that’s a pretty big hit usually,” Nistler offers—as well as rice pilaf with mixed vegetables and a regular wild rice mix with the brown rice.

Lunch is served each day first to the high school students and then elementary grades. Generally, there is only one entrée, but the salad bar offers plenty of additional choice.

Entrees include standards like pizza, tacos, orange chicken, sloppy Joes and vegetable stir-fry as well as casseroles—including a wild rice casserole—and soups like beef barley and, yes, wild rice. About half the dishes are made from scratch by Nistler and her team.

“I would say our biggest days are [when we serve] our homemade pizza burgers, where we make a mix and we put it on a homemade half a bun to make little mini pizzas,” she says. Hamburger gravy and mashed potatoes is another popular item, she adds, along with a chili and cinnamon roll combo.

It seems to not only satisfy the students but also enthuse them, Lutz opines.

And that’s not just the in-house opinion, he adds.

“ A few years ago, a local radio station was doing their usual poking fun at school lunches, and some individuals from our school called in and said, ‘You know, you’re probably not aware of what goes on at our school lunch. Come up and have some lunch sometime.’ They were invited to come up for a Thanksgiving meal and ever since then it’s been a tradition and the radio station doesn’t make fun of our school food any more.”

The radio people are perennial guests the Thursday before Thanksgiving when the school has its holiday meal.

“We have a nice little sit-down with them with our students in the choir class singing for them, and it’s a fun and festive occasion,” Lutz says.

This year, the pre-Thanksgiving event also celebrated the school’s HealthierUS Gold award and included a number of activities designed to promote awareness of healthy eating.

“If they were a strawberry group or class they would dress in strawberry colors,” Lutz explains. “Then we had a competition to see who was the most colorful and representative of their [fruit or veggie].”