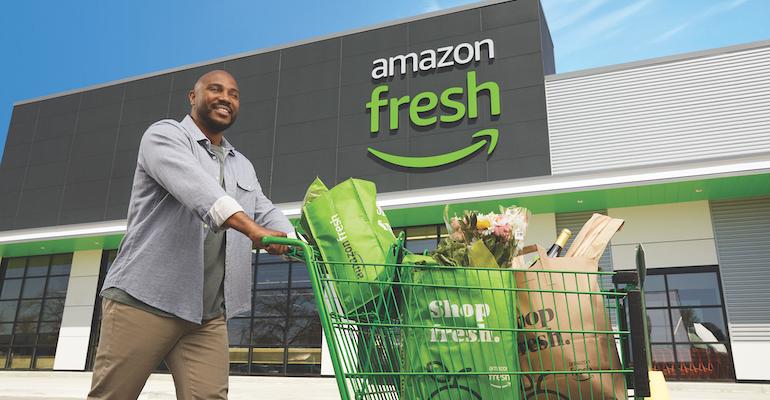 Amazon
Amazon continues to expand the scope of what’s possible with AI-enabled retail, first be extending it to its own Amazon Fresh supermarkets and most recently to high-end grocer Whole Foods.
Operations

Outside influences: lessons from restaurants and food retail

In the foodservice industry, different markets can come up with innovations, ideas and initiatives that might apply more broadly. Here are some from the commercial and retail food worlds onsite operators might want to keep an eye on….

The more onsite foodservice continues to move away from its roots in “mass feeding” and “noncommercial” operation toward a much more retail and commercial oriented approach, the more practices and innovations from commercial operators find application in in-house foodservice. That’s even more true now in the wake of the COVID pandemic, when operators across all markets faced drastic limitations on their traditional practices.

One major touchpoint where the commercial and onsite worlds fine common ground is in dealing with the ongoing labor crunch as both sectors report significant struggles to recruit sufficient numbers of workers to operate their venues. That has fed an exploding demand for automation and labor-saving technologies led by the major commercial chains—especially those in the quick-serve part of the market—that have been filtering into everyday usage and even making a few inroads into onsite locations.

It was the commercial market that pioneered remote order and meal delivery, services that are now increasingly common in onsite environments, but refinements on these approaches continue to trickle out. On the delivery end, while robots are proliferating on college campuses and in hospital corridors, the commercial market is beginning to develop the next generation—airborne drones, which a number of chains are dabbling with because of their advantage in getting to destinations without navigating around foot and vehicle traffic and other obstacles on the ground. One company already operating Australia delivered some 10,000 cups of coffee and 1,200 roast chickens last year using drones. 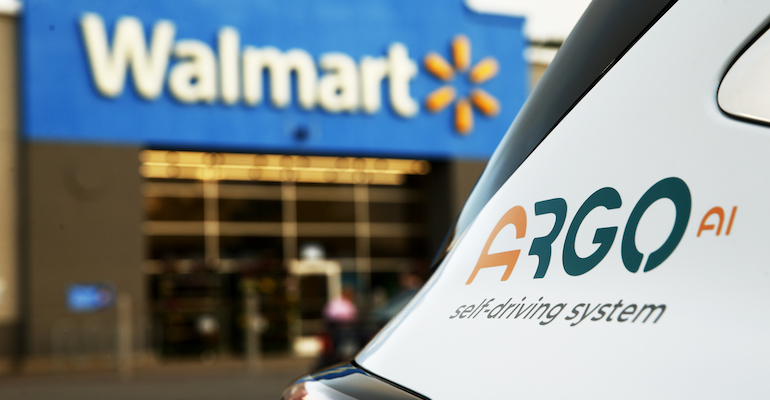 One big commercial retailer experimenting with the extension of robotic delivery into self-driving vehicles is Walmart, which in partnership with Ford Motor Co., is piloting the initiative in three major markets.

Another extension of robotic delivery—self-driving vehicles—is being tested by Walmart in partnership with Ford Motor Co. in three major markets. Full-size vehicles not only can carry more product than the robotic delivery units currently being used on campuses but may be the leading edge of a down-the-line solution to the current product delivery crisis that is being driven in significant part by a shortage of distributor truck drivers.

Also on the ground, automating the customer experience has become somewhat of a Holy Grain for commercial chains, as a way to speed up service, minimize labor and offer safe, contactless transactions. Taco Bell’s newly announced Defy platform that utilizes QR Code-based ordering and automated meal delivery is one of the cutting edge delves into this area.

More ambitious is the “automated canteen” being rolled out in Europe by robotics firm Karakuri that produces individually customized, freshly prepared hot and cold meals, with complete accuracy of portion size while providing total traceability of ingredients, nutrients, calories and quantity of every dish.

A similar platform, called Nectar, is planned to be rolled out by startup Wings in the U.S. in 2023 after it has secured financing. The AI-based kiosk-free device reportedly will be able to learn customer preferences, make personalized meals and time food preparation for exactly when and where their customers will be. 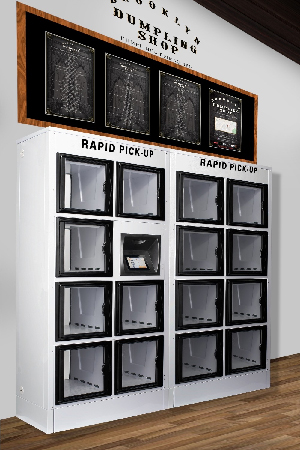 Photo: The Brooklyn Dumpling Shop chain is on the cutting edge of automated, round-the-clock customer service with its new-age automat-based units.

Along similar lines but a bit more developed are some concepts that focus on specific, premium cuisine categories such as Brooklyn Dumpling Shop, which fields what are in effect space-age automats offering a wide variety of authentic and innovative dumplings, plus related items like wontons, pot stickers and spring rolls, and sides and beverages in a format that requires very few employees—in fact, none to operate day to day—small square footage and little investment while being able to operate round the clock.

The commercial retail market has also been advancing in the use of automated stores, led by Amazon and its expanding use of artificial intelligence to facilitate shopping, first with its Amazon Go c-stores, but this year expanding to full-size Amazon Fresh supermarkets and most recently to the premium grocery market with the planned use of its Just Walk Out technology at two Whole Foods locations, significantly expanding the scope of automated retailing beyond traditional micro-markets and even unmanned c-stores.

What all of these seemingly futuristic initiatives have in common, and the reason they are relevant to onsite foodservice, is that they are not pie-in-the-sky improbabilities but increasingly practical and field-tested technologies that are being driven by strong market demand due to the rising cost and diminishing supply of labor. They also provide new, efficient ways to serve customers in areas such as contactless/touchless transactions, ordering/pickup convenience and round-the-clock service.

Of course, as with any new technology, cost in the development phase is high and paid for by deep-pocketed early adopters—in this case, high-volume commercial operators. However, history shows that as new technologies mature and best practices emerge, economies of scale kick in and prices begin to come down as vendors look to expand their markets beyond high-end users.

While nutrition, diet and sustainability issues have long characterized onsite dining programs, especially in the healthcare and education markets, some initiatives from the retail end might bear watching, such as Walmart’s recent introduction of its Built for Better program, which highlights items with icons saying “Built for Better — For You” and “Built for Better — For the Planet.” The former identifies products that meet Walmart’s “Great for You” standard (foods in line with criteria informed by the latest nutrition science and authoritative guidance) or independent standards recognizing products made without specific materials or ingredients customers may not want while the latter identifies eco-friendly, responsible products designed reduce the impact on the planet such as sustainably sourced and climate-conscious items. 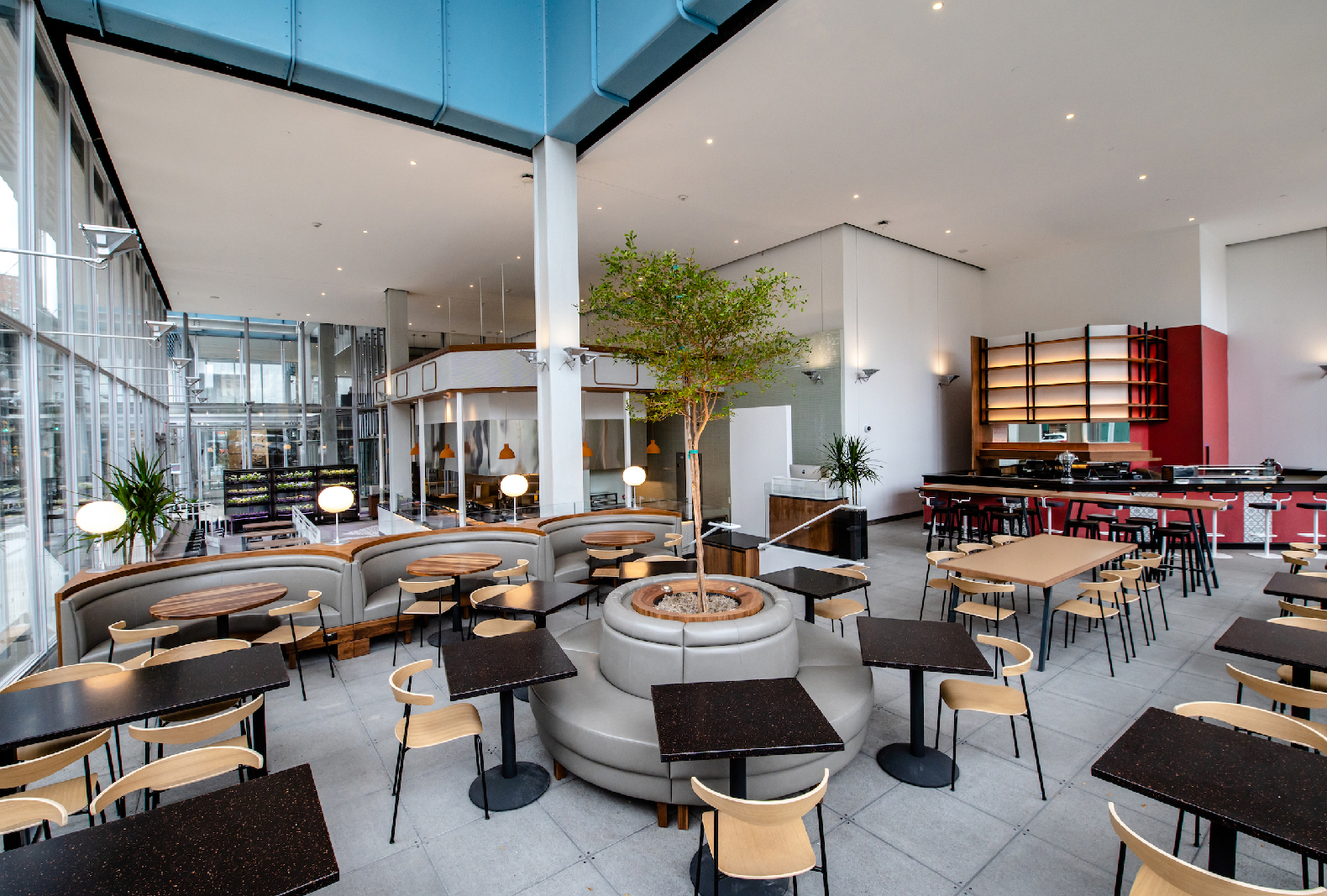 The Manhattanville Market at Columbia University’s Harlem West campus is an example of the food hall concept developed in commercial locations migrating to onsite locations like college campuses.

Another commercially-based idea making its way into some onsite locations is the food hall, an upscale twist on the multi-station cafeteria servery or retail food court where the emphasis is not on fast service so much as a celebration of food, usually by incorporating smaller and boutique vendors and exotic cuisines, unlike the familiar national brands populating the traditional food court or the generic food stations in the traditional cafeteria.

With the pandemic hopefully winding down, food halls are proliferating in major and mid-markets like Chicago, New York, California’s Bay Area, Denver, Tampa-St. Pete and Austin. 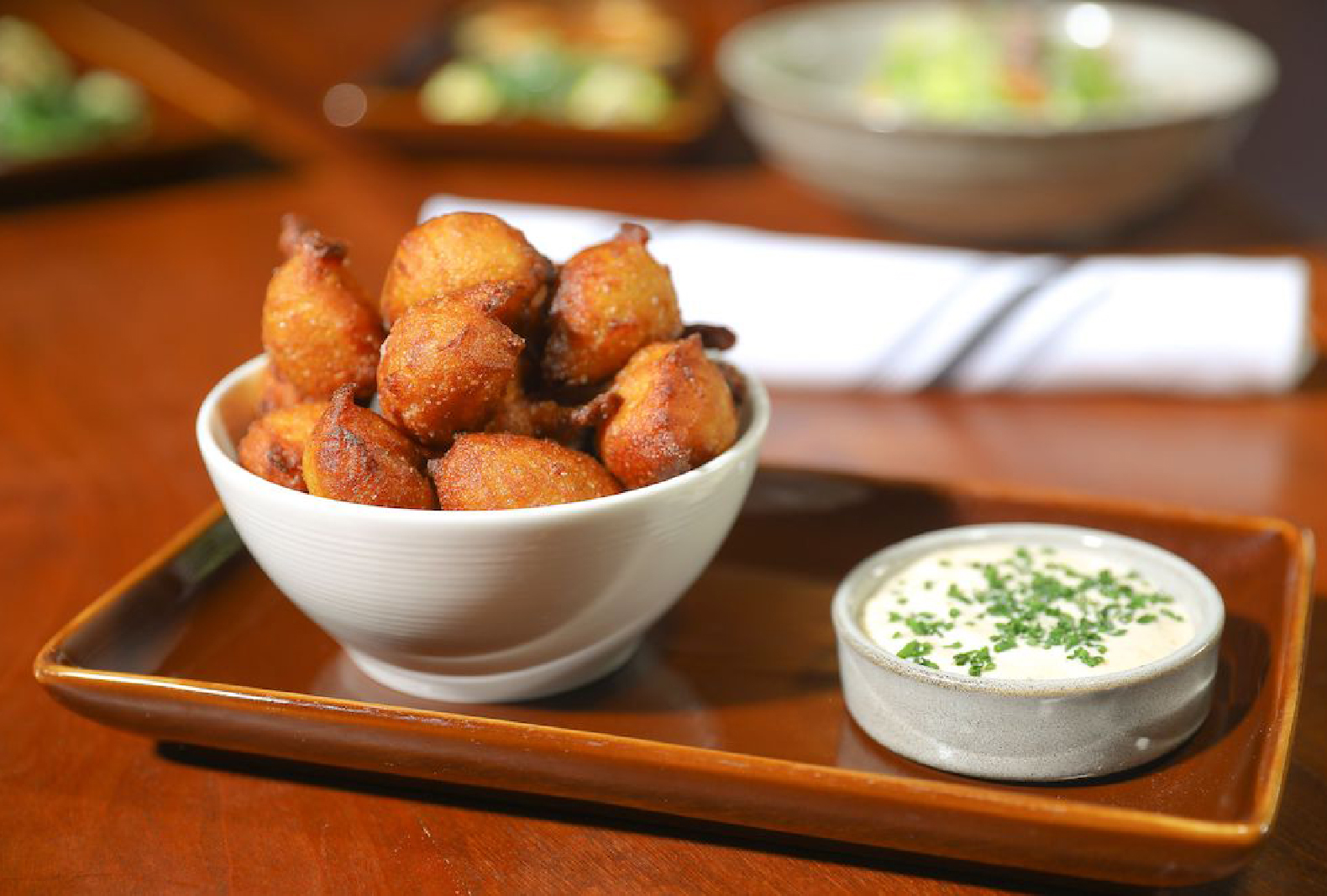 Versions of commercial food halls have been popping up in some onsite locations, primarily colleges such as UMass, Duke, Purdue, Penn and most recently Columbia’s Harlem West campus and Auburn. A pseudo-onsite food hall serving surrounding businesses and healthcare institutions opened last year in Chicago but perhaps the closest analogues to the commercial version of a “food hall” is the multiple independent brand-centered concepts developed by Fooda, which won an FM Best Concept Award for one of its locations, and Compass Group’s FoodWorks unit.

Of course, the commercial world has always been a fountain of ideas for menu creation and FM’s sister publications Nation’s Restaurant News (NRN) and Restaurant-Hospitality (RH) are constant sources of information on the latest doings.

Most recently, NRN featured a review of how chain operators are expanding the use of condiments to refresh standard dishes, such as the use of truffles on chicken wings by Buffalo Wild Wings and on burgers by Shake Shack; compound butters in dishes like a mesquite butter bacon cheeseburger from Sonic Drive-In in which the beef patty is seared in mesquite butter or the key lime grilled striped bass by Firebirds Wood Fired Grill, in which wood-grilled Pacific striped bass was topped with key lime butter sauce; and savory jams such as Sonic’s Bacon Jam Cheeseburger and the Ham-Jam Burger from Firebirds.

Other recently emerging uses of innovative condiments highlighted include Friendly’s Hot Honey SuperMelt using hot honey, the whiskey-dill sauerkraut that tops the Veggie Grill’s Reuben on rye, the mustard remoulade on the “Not So Fried” Chicken Sandwich from Mendocino Farms and a tomatillo Hollandaise on the seasonal pork carnitas omelet from First Watch. 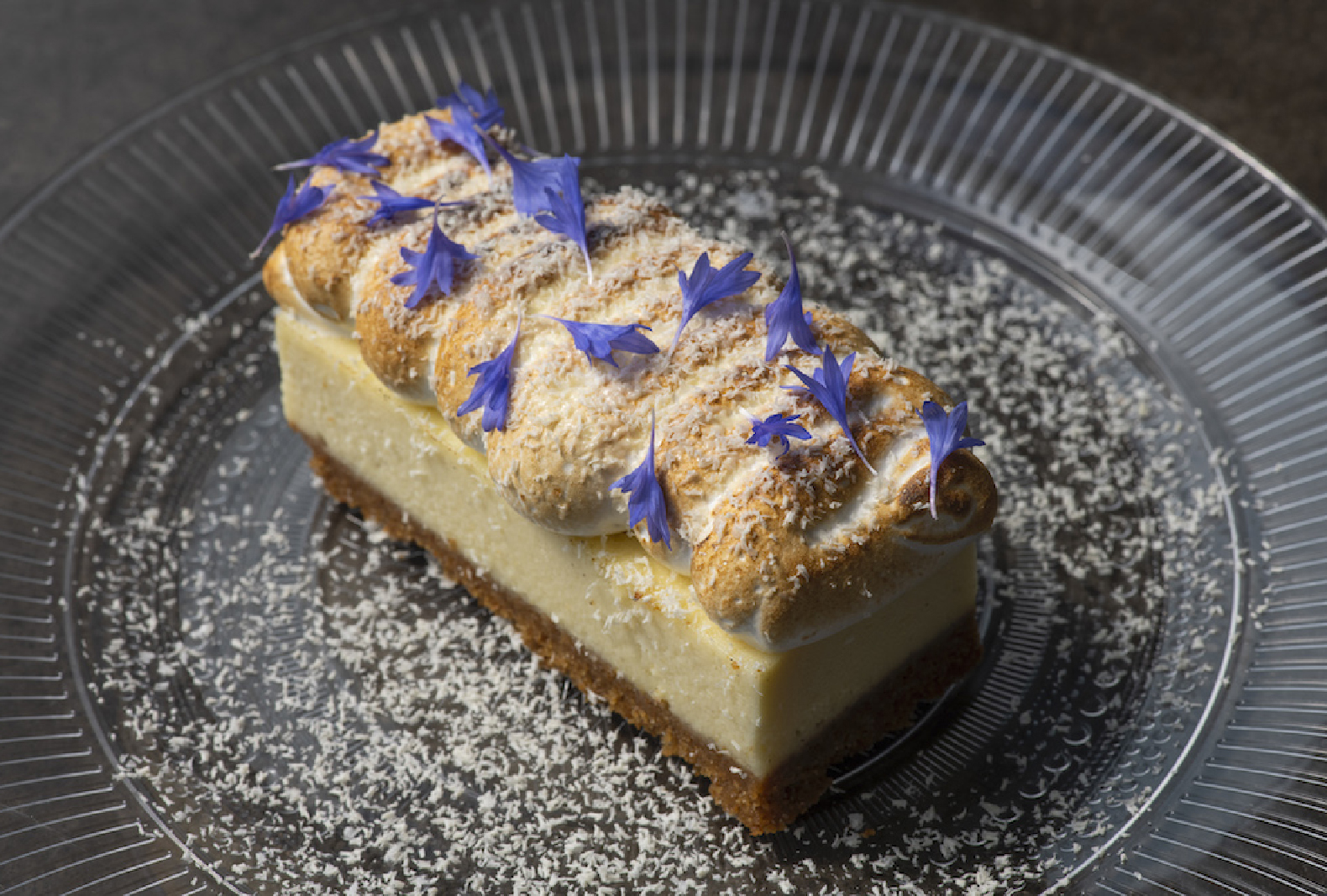 Another commercial dessert creation is this cheesecake s’more made with caramelized white chocolate and crème fraiche, from Oakland’s Tribune restaurant.

RH’s New on the Menu series most recently highlighted innovations like the use of orange Fanta soda, a common ingredient in the street food of Mexico City, to finish off the campechana seafood cocktails at Chef Paula Leguizamon’s Urbe restaurant in Houston, and a version of coconut shrimp served at Lucie Drink + Dine in Boston, where the shellfish is chopped up, blended with coconut cream and aromatics and made into bite-sized croquettes.

Recent previous editions have featured innovations such as the substitution of pommes dauphine—deep-fried balls of mashed potato mixed with choux pastry—for traditional French fries, the use of trim from Heirloom tomatoes to make an aspic that’s then served with a caprese salad, a vegan ratatouille made with local Hudson Valley produce, a cheesecake s’more made with caramelized white chocolate and crème fraiche and an ice cream sandwich using large macarons spread with apricot-elderflower jam sandwiching French-style Tahitian vanilla ice cream.

Other ideas from a recently published roundup of entrée ideas from RH readers include Cajun fried rice and a Hong Kong chicken and waffles dish made with Vietnamese flavors.

Viewpoint: School nutrition director on why foodservice pros should learn about the red meat allergy aka Alpha Gal Syndrome, sooner rather than later
Jan 31, 2022