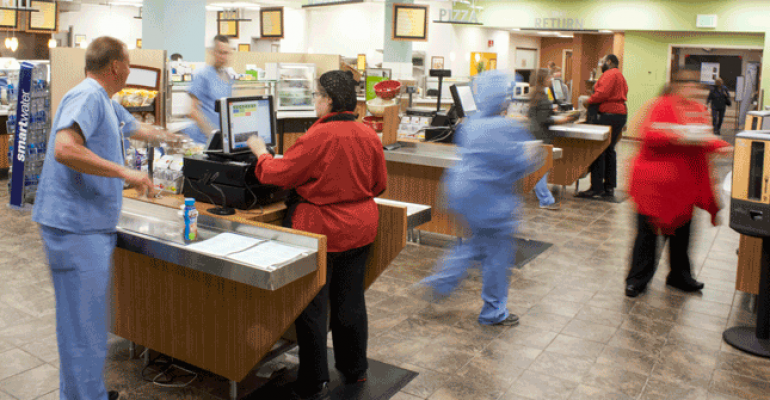 Fairview Southdale Hospital, part of Minnesota's Fairview network of hospitals, has both a radically modernized café and a modern way to keep tabs on customer attitudes, thanks to a QR code posted around the eatery on table tents and signage that gives diners access to a quick feedback option.

In addition, Fairview has won a number of accolades for which dining can take at least partial credit, including a Practice Greenhealth Award for sustainability and placement on the Women's Choice Awards' 100 Best Hospitals for Patient Experience listing.

The sustainability performance is highlighted by a kitchen composting program that has produced a 20 percent reduction in solid waste going to landfills.

For the next step, “we are in process of eliminating Styrofoam from our cafeterias and patient line,” says Sandra Laffan, system director for support services. That is something the QR code-based feedback program has made “loud and clear,” she says.

“That’s a perfect example of something that we can say we’re working on it when we reply to the messages,” she notes.

The high-tech customer feedback program also provides real-time reactions and alerts if something is wrong.

“It can be something fairly trivial like forgetting to put the garnishes out or if we ran out of something—they can express that and we could correct it immediately,” Laffan notes. “Otherwise we may never know we disappointed someone.”

The next step is to extend the program to the patient side, she says.

“It’s a restaurant-style menu offering various options for breakfast, lunch and dinner made to the specification of the patient when they order, so nothing is premade,” Laffan says. “If they want pasta at breakfast or eggs and French toast at dinner, they can choose that. It’s really geared toward helping the patient get better during their stay through food. So if I’m not feeling well and want chicken noodle soup three times a day, we’ll give you chicken noodle soup three times a day.”

Diet restrictions are handled through suggestion rather than prohibition.

“It’s the same menu for everyone, similar to what you see in a restaurant,” Laffan says, “but we have so many choices that are low in sodium or low in sugar and the way the menu is formatted, the nutritionals are right on the menu so patients can make the best choices for themselves.”

When a patient calls in an order, a call associate walks them through their menu options rather than simply telling them they can’t have something, Laffan explains. “It’s really like a real-time diet instruction for them. The associates coach them through it, so that way a patient is learning while looking at a regular menu so that when they leave the hospital they can do the same thing.”

So what happens if a patient insists on something that goes against their prescribed diet?

“At the end of the day, we’re here to take care of that patient and do what we need to do so that they’re healthy enough to leave the hospital,” Laffan says. “So if someone really needs to have that piece of white bread, we will supply it.”

Nudging customers toward healthier choices is also the preferred mode of operation in the retail area.

“Part of our commitment is that what we put in front of our customers or patients is the healthier items,” Laffan says. “They can still request other things, so if they are really dying for a cheeseburger on a white bun we are not going to say no, but that’s not what we’re going to promote or put in front of them.”

Crosstown Café, the only retail dining outlet onsite until a planned coffee kiosk opens, was remodeled three years ago and now includes pizza, build-your-own deli, entrée and made-to-order grill stations along with a salad bar and an innovation station that rotates build-your-own concepts like pasta, stir-fry and tacos where customers choose the ingredients that are then prepared and assembled fresh.

The entrée station emphasizes healthy meals in alignment with the hospital’s commitment to the Partnership for a Healthier America (PHA). The PHA commitment requires that 60 percent of the choices be healthy according to PHA guidelines.

A grab-and-go component extends the hours when customers can get a meal even after the hot food stations close. Operating hours are 6:30 a.m. to 6:30 p.m. daily.

The renovation of Crosstown Café doubled the size of the servery space by removing unneeded seating space, which allowed the number of selections that could be menued on a given day to basically double. That led to an increase in sales of 20 to 30 percent, Laffan estimates, despite some early fears about the changeover to a more aggressively healthful approach.

“At first, there was some concern that we would lose sales because of the [PHA] commitment [which necessitates moves such as eliminating some popular fried items],” she recalls, “but overall staff and visitors are so appreciative to have those healthy alternatives with such a high-quality level that we didn’t see that dip in sales.”