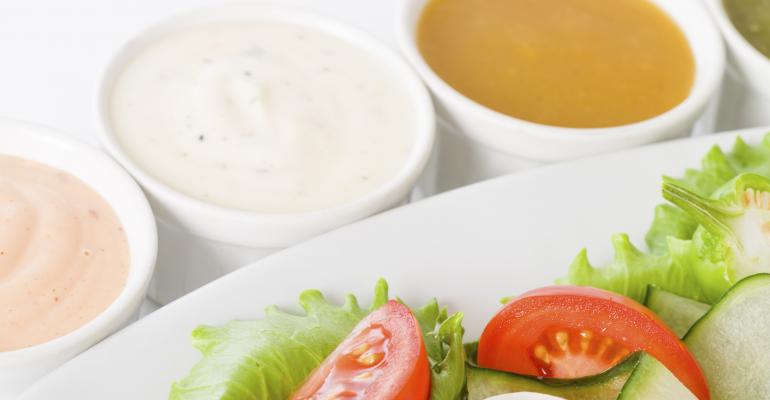 Cooking in the healthcare industry means providing comfort, nutrition and sometimes the best part of the day to patients and customers. FM has selected 8 great recipes that originated in a healthcare setting. From Memorial Sloan Kettering's authentic Haitian rice dish to three 'extreme' salad dressings for kids at OSU Medical Center to an elegant apple tart from NY Methodist Hospital, these recipes would work in a variety of applications.

Get the recipes here:

Drew Patterson of the OSU Medical Center developed these dressings as a fun (and sneaky) way for kids to eat salads. Crisp lettuce and veggies from local farms are made very appealing to kids with low-fat, low-cal, simple-to-make salad dressings in wild flavors. This program, which focused on kindergarten through fifth graders, was part of a collaboration between the Ohio State University Wexner Medical Center (OSUMC) and the Ohio Dept. of Education, funded by Ohio Team Nutrition Training Grants from the U.S. Dept. of Agriculture.

Delicious desserts rely on well-executed fundamentals. The first—and arguably most important—is the balance and interaction between flavor profiles. Erin Reddin, Pastry Chef at Saint Clare’s Health System (SCHS), Denville, N.J., and Aatul Jain, Retail Operations Manager & Chef, have made this tenet the foundation of their recipe development strategy, evident in this spicy-sweet-gingery cheesecake.


“A lot of restaurants are making their own pickles now, so I said, ‘Why not us, too?’ Our pickles are superior to the product we were using, and it’s cheaper to do,” Conklin says. “And the big benefit to doing your own pickling is that you can experiment with different flavors. Now, we’re developing pickles using habanero peppers.”

Jack Wolfe, Executive Chef at New York Methodist Hospital (NYMH) in Brooklyn, focuses on ingredients when he develops a savory dessert, but more so for an item’s familiarity than its flavor. “If you feature an ingredient that’s well-known, but use it out of context, it seems to have a better shot at success,” he says. This tart, if made miniature, would be a great addition to a buffet table.
Hand Stretched Mozzarella Salad with Smoked Tuna Ceviche

Mozzarella is simple to make, and impressive to have on the menu. It's surprising how something so easy to do can instantly add so much menu cache. This recipe is courtesy of Dan Skay, executive chef, Parker Adventist Hospital. Ceviche and mozzarella work very well together, with a balance of flavors that's out of this world.

Michael Atanasio, Manager, Food & Nutrition, Overlook Medical Center, Summit, N.J., created this cake to be a delicious vehicle for quinoa, a grain that has been gaining recognition for the past few years for its versatility. It's also the only whole grain that's a complete protein, making it ideal for vegetarian and vegan eaters.

“The brie and the blackened tuna work great together, with the balance between hot, cool and creamy,” says Gerald Crawford, director of dining services, Life Care Center of Cleveland in Tennessee. “When the tuna is still warm, and you add the brie right on top, it just melts right down on the fish, making this a really great combination.”

Hospitals and universities are implementing "Taste of Home" programs to bring comfort to customers, staff and stakeholders. In a city like New York, there are populations from all over the globe, so they have gotten many very diverse recipes from home. At 470-bed Memorial Sloan-Kettering Cancer Center (MSKCC) in New York, many in the culinary staff have a wealth of culinary traditions, “but their day-to-day roles often limit their ability to display their rich talents due to specialized scheduled assignments,” notes Veronica McLymont, PhD, RD, CDN, director of food and nutrition services. The next few recipes are a result of an ongoing effort to highlighting hometown favorites from all over the world: