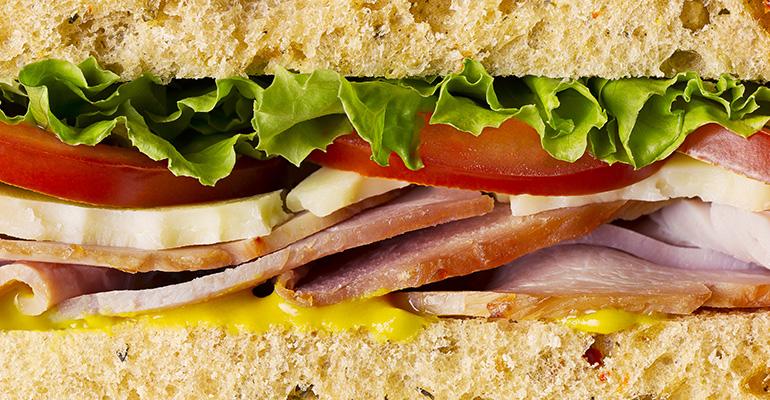 A collection of the latest and greatest recipes from NC State, UC Berkeley, Vanderbilt, and more.

The trend-focused, fast-paced environment of a college campus keeps creative chefs on their toes. Here are a dozen of the best recipes we've recently collected from schools around the country, from Fresh Sopapillas at San Diego State University to a Southern Butternut Squash Tart with fried sage from Vanderbilt University and Ginger-Chicken Panini all the way from the University of Wisconsin.

Potato Fritters
Ida Shen, executive chef and assistant director, Cal Dining, UC Berkeley, touts this fritter recipe as a good example of an offering that's easy to prepare and appropriate for high volume. These are a fun option for Berkeley’s late-night dining program and concession operations. These fritters even accommodate more than one dietary restriction (gluten-free and, with modification, vegan). Dipped in Sriracha aioli or Greek-yogurt tzatziki? Perfect snack!

‘In the Nood’ Fettuccini Carbonara
It’s the right time in the marketplace for noodle stations, according to Brent Beringer, resident district manager of the University of Virginia Dining/Aramark, where the In the Nood concept has become the crown jewel of the new dining hall. Fettuccini Carbonara, a somewhat decadent bowl of bacon, peas, caramelized onions and creamy Alfredo sauce, can be customized with protein options like chicken, tofu or shrimp.

Cuban Potato Salad
Todd Bogan, unit administrator for Hillel Center at the University of Maryland, took the one-and-only flavor profile of the Cuban sandwich and married it with potato salad. The lively tastes and traditions of the Caribbean lend themselves to interpretation and work well with many ingredients. Plus, it's not every day you see a potato salad with lime juice, black beans, pickles and green olives!

San Diego Sopapillas
Chef Justin Mead of San Diego State University stays true to tradition when making sopapillas: crisp, warm, square beds for house-made carnitas, peppers and authentic Mexican cheese. San Diego on a plate. This recipe is especially good for those with baking skills who want to cross over into savory territory. You could also top them with chocolate or drizzle with honey. Now there's an idea...

Kale Waldorf Salad (Vegan)
Kale has menu staying power, thanks to its incredible nutrient profile and versatility. Kevin Aiello, executive chef, infuses kale with old-school cool in this take on the Waldorf salad that's pure genius. It's a crisp addition to the offerings at UCLA’s Test Kitchen at Hedrick, a dinner-only dining hall where healthful recipes are developed and kale is incorporated into the menu up to five times a week.

Butternut Squash Tart with Fried Sage
As assistant director of catering at Vanderbilt University, Nashville, TN, Barbara Sieger knows how to set an inviting Southern table like you wouldn't believe. Small bites served in innovative vessels are some of Vanderbilt's catering calling cards: mini cast iron skillets for cornbread, cute little cups of beets and ceramic spoons for a peanut butter concoction that's straight-up fall fabulous. Butternut Tart with Fried Sage is a great example of the incredible appetizers that Vandy catering can conjure up.

Black Bean Brownies
At Soka University, Aliso Viejo, CA, Pastry Chef Sam Baker has developed a number of savory treats featuring eccentric ingredients that go over like gangbusters with students. His most popular? The black bean brownie. While it features traditional flavors like honey and cocoa, it has a richer depth of flavor thanks to the beans. More and more, pastry chefs are looking to the herb garden (and to bacon) to create desserts that play into the salty-sweet or savory sweet trend. Salty caramel was just the beginning.

Peanut Ginger Chicken Panini
Sometimes fusion makes so much sense. This sandwich, created by Jason Goldschmidt of the University of Wisconsin-Whitewater, makes it seem like a Thai-inspired entree has always belonged inside an Italian street food. Offered at a retail location on campus, this panini has so many of the hallmarks of portable food that college kids will go for: different, new, and yet packaged in a familiar grab-and-go package.

The Mini Chicken Sandwich
This little chicken sandwich’s fun size and the bold flavor are the main reasons that it "sells like crazy," according to Karen Kourkoulis, chef/manager of the University of Richmond’s Passport Café. It's a sophisticated slider (hello shallot mayo!) and it’s perfect for snacking between meals, as college students like to do. The recipe calls for KimKim sauce, a Korean style hot sauce made by a local UR alum, but you can substitute your favorite hot sauce, no problem.