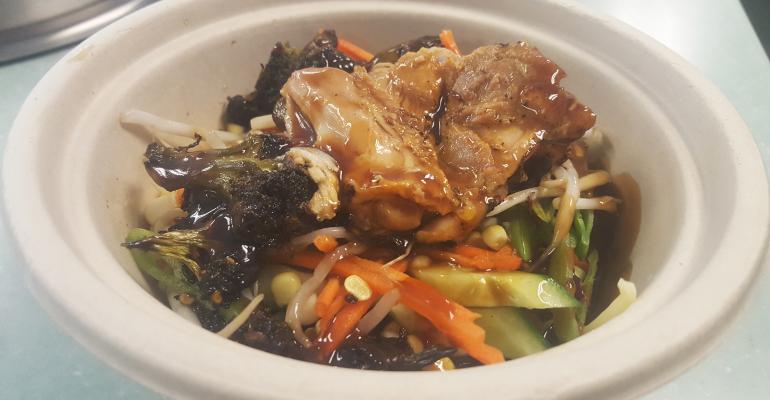 The 120-acre farm at Kennebec Valley Community College is a key resource for the academic program but also supplies the school’s kitchens with fresh product.

The 120-acre farm that sits on one of the two campuses of Kennebec Valley Community College (KVCC) in Maine has been a key education tool for students pursuing degrees in agriculture, food processing, and even culinary arts and sustainability practices.

More recently, it has also begun serving another practical purpose: supplier to the campus dining operation, which is managed by the FitzVogt division of Aladdin Food Service, a unit of Elior North America. In peak months, the farm supplies up to 45 percent of the dining operation’s fresh produce needs, from heirloom tomatoes, herbs and cucumbers to cabbage, leeks, potatoes and various squashes.

Dining services operates two facilities, one on each campus. One has the original café, a more or less traditional college eatery with its Main Event entrée station, grill and deli, while the other (the one with the farm where KVCC operates it culinary and sustainable agriculture programs) recently debuted a new concept developed by FitzVogt called Salubrious.

Salubrious takes advantage of all the fresh product produced in the nearby fields by offering a fully customizable bowl or wrap in which each diner has his choice of fresh, roasted and marinated vegetables; a rice or noodle base; and a protein option that includes tofu for those preferring to go meatless and even lamb from animals raised on the KVCC farm. There are about 50 choices at a time for students to choose from, with a portion rotated from week to week to take advantage of whatever is fresh and in season.

Salubrious was turning some 100 transactions a day since its debut near the end of the spring term, most of it incremental new business for the dining department as the seven- to eight-mile distance between the two campuses makes patronizing the eatery at the opposite end impractical.

Meanwhile, business at the original café has been up significantly—by about 75 a day to a daily average of around 200—since the menu was reworked to take advantage of the onsite farm’s bounty earlier this year, says Robert Spencer, FitzVogt’s executive chef at the school.

“This is the first year we’ve really started working closely with the farm,” Spencer says. “We have a culinary program on the campus with the farm, so we’re working on a program to have the culinary students there make some of the produce harvested during the warm months into things like marinara sauce, salsas and anything else we can make ahead and then use over the winter months.”

Product does continue to trickle in even in winter as the farm includes a greenhouse that produces fresh herbs and lettuces practically year-round.

Menus, especially for the Main Event entrée station, are determined in part by reports from the farm—usually about a week in advance—about what is ripe and ready for picking.

“The farm sends us a weekly report, telling us exactly what they have, the amount that they have and then we look at the product and place our order for the week,” Spencer explains. “We have a new menu every week at the café.”

While produce production fluctuates with the seasons, other farm products are constant. For instance, FitzVogt gets all its eggs for both campuses from the farm’s chickens, which are raised sustainably on pasture.

Most of the eggs—the cafes go through about 50 dozen a week—are, of course, used during the breakfast daypart, but Salubrious also places them in various forms among the options for filling its bowls and wraps, and they also wind up in baked goods like custards and cakes.

The free-range nature of the hens’ treatment makes a difference in the eggs, in both flavor and appearance. “The yolk, for example, is almost a bright orange color as opposed to the pale yellow you get in a supermarket,” Spencer observes, “and the taste is a lot richer. The students definitely notice the difference.”

A blackboard on both properties lists where the produce being served came from even if it isn’t the KVCC farm. “If it’s not coming from our farm, we try to source it from as close to the campus as possible,” he says.

Another non-produce product used by the kitchen from the farm is lamb, which is processed and then frozen offsite before shipment back to KVCC. “Those are guidelines here in Maine; you can’t use the product unless it’s been frozen first,” Spencer explains.

The lamb is used in both cafes.

“We use it in a lot of the ethnic cuisines,” Spencer observes. “Because we are in rural Maine, we are educating students while we do it because lamb is not something that most of our students would normally see, so it gives us an opportunity to give them a new product.”

At Salubrious, the lamb is an option for adding to a salad, wrap or noodle bowl. It can be offered ground or in strips with various spice and marinade treatments.

KVCC’s role as a center of agricultural and culinary education activity is fairly recent. Though the school was founded in 1969, it wasn’t until this decade under current president Richard Hopper that KVCC developed its programs in these areas.

The farm, part of a 580-acre plot of land, was acquired by KVCC in 2012, and the agricultural science and culinary science programs were established soon afterward with the goal of fostering academic synergies between the two areas.

“I’m a strong proponent of multidisciplinary and interdisciplinary academic programs,” Hopper asserts. “So connecting the farm and agricultural program to the culinary arts program seemed like a very natural fit because it also speaks to the farm-to-table movement. But,” he is quick to add, “we are going beyond that to wellness and healthy eating.”

As Somerset, where KVCC is located, is one of Maine’s poorest counties, Hopper is determined to make the school into a center of the fight to combat the endemic health conditions poverty tends to foster, such as obesity, hypertension and diabetes. To that end, KVCC has established an alliance with Maine General Hospital in Augusta for which KVCC hosts wellness activities on its campus.

The two institutions are also hosting the next semi-annual member meeting of the Teaching Kitchen Collaborative this September. As the previous meetings were held at the CIA in Napa Valley and at Google’s New York City facility, KVCC and Maine General are in prestigious company.

Also playing a role in the academic mission is KVCC’s geographic location in a state with a growing reputation among both foodies and agrarians.

“Part of what we’re trying to do is to speak to our local environment, which embraces agriculture and good food,” Hopper says, noting Maine’s expanding roster of noted independent restaurants, farms and artisanal processors. It is, for example, the leading producer among the states of artisanal cheeses and Skowhegan, capital of Somerset County, is the center of the Maine Grain Alliance, where a grist mill processes a lot of locally grown grains into premium breads and pastas.

“One of my goals is to increase the number of outsiders coming to our campus to eat, “ Hopper says, noting that the two campus eateries are open to the public. “I want them to be aware of what we have on campus and to come and enjoy the food here because it’s not just for students, faculty and staff.”