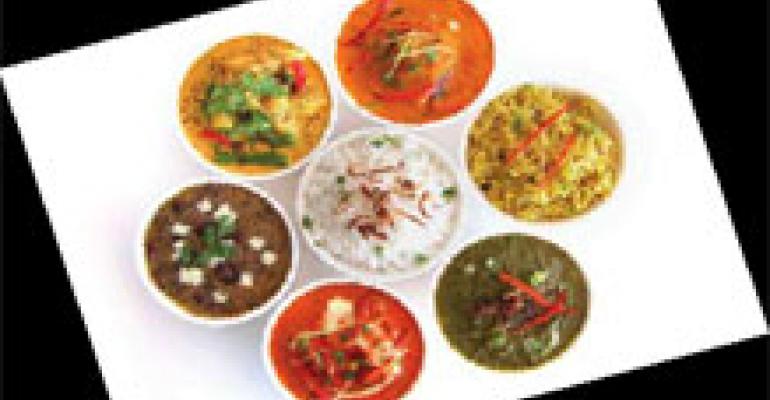 Look at the richly colored textiles of India and you get a good idea of the richness of its culture. And, with 15 official languages and 1,568 dialects, this diversity is also reflected in its cuisine.

The hallmark of all Indian cuisines is the significant use of spices. These are often layered throughout a dish first by dry roasting then grinding. Another common technique: “popping” (frying) whole spices or a spice paste in hot ghee or oil, and then adding at the end as a final flavor note.

The other unifying element is the use of a larger variety of vegetables than most other culinary traditions.

The staples of Indian cuisine are rice, atta (a special type of whole wheat flour), and at least five dozen varieties of pulses (edible seeds of pod-bearing plants, such as peas and beans). Pulses are mostly used in the form of dal (stew). One exception is chana, which is often cooked whole for breakfast or is processed into flour (besan).

Tour of India
Over the centuries, Indian cuisine has been influenced by the Aryans, Arab and Chinese traders, and conquerors such as the Persians, Mongolians (hot pot cooking), Turks, Greeks,British (Indian ketchup and tea) and the Portuguese (Vindaloo, potatoes and tomatoes). Islamic rule resulted in a blending of the non-vegetarian fare of the Middle East (kabobs, pilafs) and the rich gravies that were indigenous to India, creating what is known as Mughlai Cuisine.

The North is said to be the heart of some of the most exotic styles of cooking. Food from North India is characterized by its thick gravies. Chilies, saffron, milk, yogurt, cottage cheese, ghee and nuts are common ingredients.

South Indian cuisine is regarded as the hottest of all Indian food. In this region chutneys are made of tamarind, coconut, peanuts, dal, fenugreek seeds, and cilantro. South Indian dals and curries are generally soupier than the Northern style. Coconut milk straight from the nut is a common beverage in South India and coffee is very popular.

The Western region probably has the most diverse styles of food in India. Places like Rajasthan and Gujarat in West India have hot, dry climates so the relatively smaller variety of vegetables available are preserved as pickles and chutneys. Culturally these states are largely Hindu and vegetarian.

Cosmopolitan Maharashtra is partly coastal and partly arid, so the food varies accordingly. Peanuts and coconut are important ingredients as they are freely available. Goa, with its lush green coastline, has an abundance of fresh fish and seafood. In Rajasthani the food is spicy and largely vegetarian but does includes meat dishes like Laal Maas (red meat curry) while Gujarats cuisine is know for its slight sweet touch (a pinch of sugar is added to most dishes) and is traditionally entirely vegetarian.

The East is home to beaches and mountains and Cherrapunji (the city with the highest rainfall in the world) grows a lot of rice. Green vegetables and fruit are also abundant.

Simplicity is the key word for the food and its preparation in this region. Steaming and frying are popular methods of cooking. In coastal regions, fish is the non-vegetarian food of choice. Further inland, pork is popular. Some of India’s most popular and worldrenowned sweets come from here.

Onsite, in Demand
In the U.S., the rise of an Indian culinary “trend” has been steadily—if quietly—building for the past decade. Traditional Indian and Indian fusion restaurants are very popular in major cities, and this trend is amply reflected at onsite venues.

Imagine sticking your hand into a 700°F oven—Chef Tsitsi Hellman, operations director at Cisco, a Bon Appétit account, does so on a daily basis! A Tandoori oven was added to the facility in Fall 2006. And according to Chef Hellman, “it does takes getting used at first, but you use an extremely quick hand motion to place the naan dough (or kebobs) inside. Once you get used to it, you don’t even feel the heat.”

Naan, an Indian bread, is offered alongside other Tandoori specialties like lamb and vegetable kebabs (marinated overnight prior to cooking), and other classic Indian dishes.

In addition to authentic bread and kebabs, Chef Hellman makes her own paneer, a fresh cheese that is a rich source of protein used in many vegetable and vegetarian dishes throughout India. “I only use high quality, full cream milk because it yields a soft and flavorful paneer. It tastes so much better when it’s made fresh.”

By the Hand of a Master
In 2006, Sodexho partnered with renowned Indian Chef Suvir Saran and created the Festival of Lights promotion. (Also known as Diwali, the festival is looked upon as the beginning of the New Year. It is called the Festival of Lights because it is common practice in India to light small oil lamps and place them around the home.)

Saran’s experiences range from restaurants and catering to cookbooks and classrooms. In 2004 Saran opened Dévi restaurant in New York City, which has earned a one-star rating in the Michelin Guide New York City (2007).

Chef Saran traveled across the country sharing his talents with a handful of accounts. Customers were able to sample dishes from his cookbook (see sidebar pg. 72), while Sodexho culinarians were educated on the rich traditions and culinary specialties and techniques of India.

The festival featured dishes that were “a spin on traditional Indian but with a mainstream delivery,” says Rich Arakelian, B&I corporate chef at Sodexho.

For example, the “Frankie” is a burrito-like menu item. Customers choose a savory filling—lamb vindaloo, creamy chicken or chick peas and potatoes—which is then “wrapped” with basmati rice, sauteed pepper and onions, and cucumber salad and served with assorted raitas, chutney and dals on the side.

For an interesting twist on the familiar, try the Portobello Meatloaf with Tamarind Ketchup Glaze, an Indian spiced, tender beef loaf glazed with a sweet and tangy tomato-based sauce (see recipe, pg. 74).

How salad-making robots are expanding the reach of food service of at Mayo Clinic Hospital
Aug 12, 2020