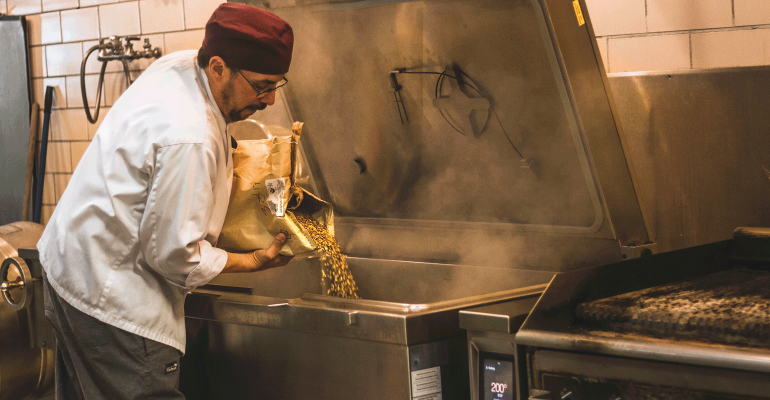 Flavorful entrées featuring lentils, beans and more occur in a fraction of the time thanks to a new addition to the kitchen equipment lineup.

“Instant pots,” aka pressure cookers, have been sweeping the internet lately as a way for busy home cooks to create complex slow-simmered flavors in a fraction of the time. Does the trend translate to an onsite college kitchen? That’s what Chef Tony Martinez, Director Camp Howard and the rest of the culinary team have recently been finding out at the University of Montana in Missoula.

Thanks to a $46,000 grant, an industrial-sized pressure cooker was purchased, and so far it’s been worth its weight in gold—or at least golden lentil dal. It turns out the instant pot has a lot going for it in terms of sustainability,

Like many in the college dining world, the chefs at the University of Montana have been shifting to a more plant-based menu, with hearty portions of pulses taking up the slack for the “less meat, better meat” mindset.

“Last year we purchased about $76,000 worth of canned beans,” Howard says. “And a lot of pulses are grown here in Montana.”

“So they’re grown in Montana, shipped somewhere else, canned then shipped back to us,” he continues, reflecting on the carbon footprint aspect.

The pressure cooker’s speedy way of cooking dried pulses is one of its major positives in an onsite setting. A pressure cooker works by allowing steam (and pressure) to build up inside a sealed pot, making food cook much faster than with traditional braising or roasting. A valve on the pot controls the level of pressure. Dried lentils can be cooked in an hour.

Right now, UM Dining is on target to save about $10,000 on canned beans this year and reduce the amount of steel cans by about 300 pounds.

Another plus is the variety of pulses has gone way up, since many more unusual varieties (like delicate pink beans or fancy French green lentils) are available in dried form. The dining team has even switched the master hummus recipe from chickpea-based to lentil-based.

“The pressure cooker has opened up a lot of opportunities for our chefs to do some different things with pulses. And since we’re able to cook them for a shorter amount of time, we’re retaining more nutrients,” Howard says. “We doing more ethnic dishes than ever…we’re not just using them like ‘here’s some black beans with some sour cream on top.’ We’re positioning this as a more plant-forward way to eat.”

As if all those benefits weren’t enough, the ecology and agricultural win in the pressure cooker as well.

“Not only are we supporting local agriculture, but these plants are a good winter crop,” Howard says. “If they plant wheat one year, they can plant legumes the next and it’ll fix the nitrogen, suppress weeds and help farmers diversify their crops. Before lentils caught on, they would let a field be dormant for a year and then till it and put in the same crop as the year before. So farmers can now make more income.”