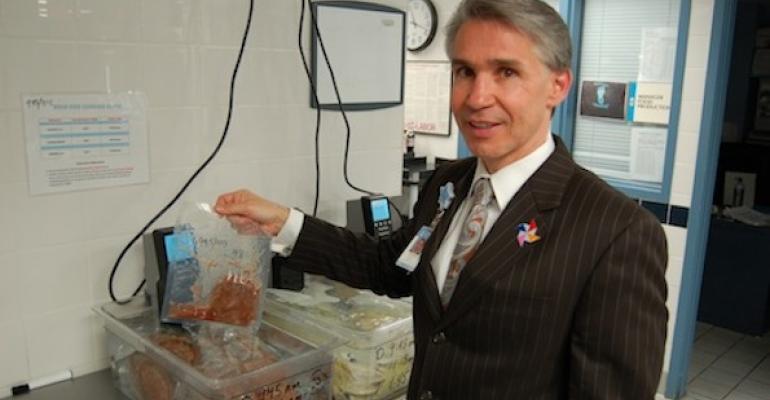 <p>University of North Carolina Health Care Dining Director Angelo Mojica with one of the burger patties being made with sous vide techniques in the hospital&#39;s production kitchen.</p>
Operations>Production

Turning Down the Heat

Sous vide techniques being introduced in some onsite operations.

The vacuum-sealed bags soak in water that's slightly warmer than a nice hot bath but way under boiling point. They contain proteins that conventional wisdom says must be exposed to temperatures much higher in order to kill potentially deadly pathogens. But they never even reach 140°F, which is way below the traditional temperature threshold considered the industry standard for safe cooking of meats.

Yet, the bags will yield meats that are just as safe to eat as those semi-incinerated on a grill, and the pathogens are just as dead.

That’s because there’s more than one way to kill a pathogen, explains Angelo Mojica, director of food & nutrition services at University of North Carolina Hospitals, where this counterintuitive cooking process is taking place.

That is the essence of a cooking technique called sous vide (French for “under vacuum”), which immerses vacuum-sealed plastic bags of food in water heated typically to 125°F to 140°F for an extended period ranging from several hours to a day or more, depending on the item. They are then quickly chilled to under 36°F to retard the growth of new pathogens.

Sous vide is bubbling up as a production alternative in institutional environments, especially healthcare, where operators seek to reconcile demands for better meal quality with fiscal realities. Currently, only a handful—a dozen or so—are using it, says John Biswanger, CFE, vice president and master chef for the Don Miller & Associates consulting firm who is an expert on sous vide.

"I can see vous vide as a less costly alternative in room service style patient dining, for example, since the equipment is less expensive than conventional units," Biswanger says. "For one thing, it doesn't require hoods. Meanwhile, you get excellent product quality and enhanced nutritional profile since the vitamins in the food never get denatured and the sealed containers mean you need less salt, so the sodium content is reduced."

The biggest hurdle is regulatory as health departments tend to take a dim view of foods cooked at low temperatures and some states simply don't allow it (Massachusetts allows sous vide products to be served but not produced).

"You definitely need state approval of a HACCP plan specifically for the sous vide production," Biswanger says. "Once the food is cooked at the proper temperature for the proper length of time it is pasteurized, that is, the pathogens in the food have been killed. At that point it has to be chilled quickly to under 36 degrees. Proper storage and handling is absolutely critical."

In most cases, sous vide production yields a moist, thoroughly cooked product with little shrink, no burning and generally more flavor since spices and flavorings can’t leach away. In fact, by being sealed into the bag with the food over an extended period, any flavor enhancers penetrate it all the more thoroughly.

The shelf life of sous vide products in the cooler ranges from a couple weeks to more than a month, depending on temperature and the nature of the product. They can also of course be frozen for an even longer shelf life, but that is less traditional and, frankly, defeats sous vide's purpose. When it's time to serve sous vide, the food can be rethermed in the vacuum bags in hot water. Alternately, it can be removed and heated in an oven or microwave or on a stove. For some meats, a turn on the grill is used not to cook but to add those customer-pleasing grill marks or browning.

It sounds very cutting edge, but French chefs were using sous vide as far back as the 19th century. The technique eventually migrated to this country, but was generally confined to high-end restaurants with chefs confident enough to handle what is an admittedly risky process if not done properly.

At UNC Hospitals, Mojica is using sous vide to cook items like salmon filets, chicken, pork and beef for his patient room service menu. Burgers can be much thicker because sous vide cooks meat thoroughly all the way through without overcooking the surface.

“Traditionally, to get patties that are sufficiently cooked through for a hospital tray, you had to make them thin because the thicker ones would burn on the outside before the inside got cooked,” Mojica explains. “The result was a thin and not very attractive product. With sous vide, however, it is thick, juicy and thoroughly cooked through with no burning.”

The process also lends itself to volume production. At the University of Colorado in Boulder, up to a ton of various meats—lamb, outside beef skirt, chicken thighs—are cooked each night four times a week in the school’s central kitchen for use in the dining centers.

“We started doing this about three years ago because it allows us to create a from-scratch internal food line where we have full control over the ingredients and the finished product,” says Executive Sous Chef Christian Black. “That allowed us to bring it as close to a la carte services as we possibly could given the volume situation.”

“Think of it as a very large braising pan,” Black says. “With the computer technology and the precision of the equipment, we can break down the collagens and the elastins to make that wholesome and delicious product. It really tastes like it was slow-braised in your mother’s kitchen on a Sunday afternoon.”

The turnover of prepared product is a week to a week-and-a-half, Black says. “We forecast out the needs of our dining centers and produce based on that.”

The school invested up to $250,000 in equipment costs to install the program, as well as extensive staff training time. It worked with the FDA on the training as well as on the development of an acceptable HACCP protocol. The FDA imprimatur helps satisfy local health inspectors.

Morrison Management Co. uses a sous vide process to prepare turkeys, roast beef and pork loins in four commissary operations around the country for healthcare clients. “For us, it’s a lot about food safety as well as product shrinkage and total consistency,” says Senior Corporate Executive Chef Kevin Dorr. “You can get an even medium rare from top to bottom that you could never get in an oven. You get the consistency because you can control the temperature exactly.”

Some of the meats produced in these kitchens are marinated or receive a spice rub, while others are unflavored and slated for use in various recipes. The process allows Morrison to provide clients that lack onsite production equipment or culinary expertise a way to get optimally cooked and consistently produced proteins.

Sous vide cooking also elevates more economical and lower ends cuts, says Dorr. “As long as you cook it low enough and slow enough, you can break down almost any piece of meat to make it more tender,” he notes. “A top round, for example, would ordinarily be rather chewy, but cooked sous vide, it falls apart on the fork.”