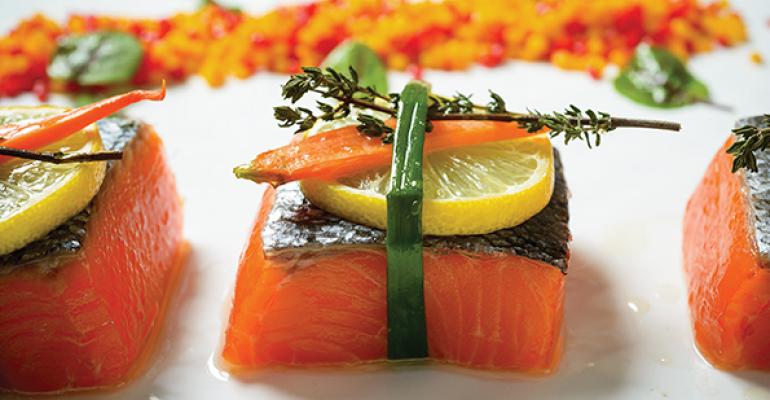 Not the same old salmon

“Everyone offers salmon. Chefs tend to throw salmon on the menu when they need to fill a spot,” says Daniel Concepcion, executive chef, Eurest Dining Services at Zappos in Las Vegas.

Concepcion fights fish fatigue with colorful, clean and cutting-edge salmon dishes that are much more than a placeholder on the menu. One example is his Crispy Skin Salmon (above), which features pickled radish, edible nasturtium flowers, Thai chili oil and yuzu koshu, a green chili pepper paste.

“I wanted to add a few dimensions of flavor,” Concepcion says. “Together with the yuzu koshu and the chili oil, the fatty but flavorful salmon becomes both savory and sweet, with a hint of heat. I think it’s the perfect combination for this fish.”

Salmon, it turns out, can be perfect in many different ways. Whether it’s grilled, seared, poached, smoked or even served raw, exciting things are happening with this familiar fish.

Flavors, Sauces and Secret Ingredients
“Salmon is such a popular fish with our students,” says Gary Brautigam, director of dining services at Gettysburg College, in Pennsylvania. “Each time we serve it at the main dining center we go through about 130 pounds.”

But Brautigam doesn’t let salmon simply rest on its laurels. He creates finished-to-order plates of salmon that evoke a white-tablecloth atmosphere, a result of his training as a classical French chef.

“We finish a lot of salmon entrées on the line,” he says, adding that salmon can be roasted ahead of time in large quantities, then heated quickly in a sauté pan to order. “Students walk up and get a perfect plate. It just makes for a better dining experience.”
Even though salmon is known for its bolder flavor, sauces and seasonings should play with the fish, not overpower it.

“The whole idea of salmon needing a stronger flavor to balance it…it doesn’t really need to be disguised,” Brautigam says. “These are all done lightly. [The goal is to] enhance the salmon rather than mask it.”

“Lead with Delicious”
Salmon enhancement is also an everyday thing at Stanford University, which purchases 27,250 pounds of salmon each year. With that much salmon, it’s definitely up to the chefs to keep it interesting.

“We do salmon so many ways here. Our chefs always have the responsibility to lead with delicious and help our customers avoid menu fatigue,” says Chandon Clenard, senior executive chef of Performance Dining at Stanford. “It’s about being innovative and being seasonal.

“A very common way [of avoiding the boring route] is roasting in the oven and then, depending on what season it is, it could have a very simple light sauce, something going up citrusy to a smoky chipotle barbecue to a coconut-curry sauce,” Clenard continues.
The chefs at Stanford have been obsessed lately with such fish flavor boosters as preserved lemons (“Such a cool ingredient,” Clenard says) and Sriracha salt. “I take salt and mix Sriracha with it and then spread it out on a sheet pan and stick it in the oven with the pilot light on. I use it on everything, including salmon.”

Cold-smoking salmon (similar to regular smoking, but the salmon is first cured and then smoke is applied) results in an out-of-this-world Eggs Benedict: smoked salmon on a pillowy poached egg with lemony hollandaise.

Salmon also can be part of many global menu items, and at Stanford, that can mean a salmon banh mi that becomes a po’boy mash-up when fried salmon is used in the traditional Vietnamese sandwich.

“And then we make a syrupy, sugary sauce of caramelized sugar mixed with mayonnaise, almost like a gastrique,” Clenard says. “We arrest the caramelization process with fish sauce instead of vinegar, and then mix that with mayo. Then we add the pickled carrots and daikon, hot chilies and cilantro from a traditional banh mi.”

Salmon is also a key player in cioppino, the classic California-meets-Italy seafood stew that gets its flavor from a rich tomato broth and then gets sopped up with sourdough bread. “You put the salmon in right toward the end,” Clenard says.

And Clenard adds that while salmon is “pretty forgiving to cook with,” there are some do’s and don’ts to keep in mind when getting started in the kitchen with techniques for salmon.

Do add flavor whenever you can when smoking salmon. “You can add a lot of different aromatics. We’ve done wonderful ones where we cure the salmon with salt, brown sugar, habanero peppers, cilantro, lime zest—the flavor is absolutely wonderful and intense.” Smoked salmon goes great on salads and pasta dishes.

Don’t touch that skin! “It’s better to keep the skin on when you cook it, generally. Always start with the skin side down if you’re searing and then roasting. The only exception would be if you poach it.”

Do go for a crispy skin. “If you want crispy skin, probably the best way would be to pan-sear it with a little oil in the pan and then finish it in a hot oven quickly. Take the back of a fish spatula (it’s more flexible) and apply even and gentle pressure so the whole skin gets contact when you start. If you’re not using the oven, start it skin side down on higher heat, flip it and then turn down the heat.”

Don’t pull the pin bones out wrong! “Pull them out in the direction that they’re oriented with the flesh and do it straight out, not at an angle.”

Don’t poach salmon in plain water or you’ll miss an opportunity to add flavor. “Traditional French technique is to cook in a court bouillon. You’re flavoring the water with white wine, lemon and aromatics.”

Don’t overcook it. That’s the most common mistake people make. “Do not cook salmon until it flakes unless you’re cooking it for your cat. It’s grainy.  The texture is horrible. The flavor is going to be very strong and forward.”

Do give salmon tenderloin a try. When the Alaskan fisherman Stanford buys its salmon from came down for Seafood Week, he introduced a new product: salmon tenderloin, the backbone of the fish that would traditionally be a waste product and can be shredded for a ground beef sort of texture.

“They figured out a way to mechanize [the production of this] so it’s now marketable,” says Clenard’s co-worker Dara Silverstein, sustainable food program manager at Stanford. “We started buying that. We buy 25,000 pounds of filets and 2,000 of the tenderloin. We pitched it around to the different chefs: ‘Does anyone want to use this?’”

It’s now used the same way taco meat would be on the burrito bar at the freshman dining hall and also on various tacos, tostadas and taquitos.