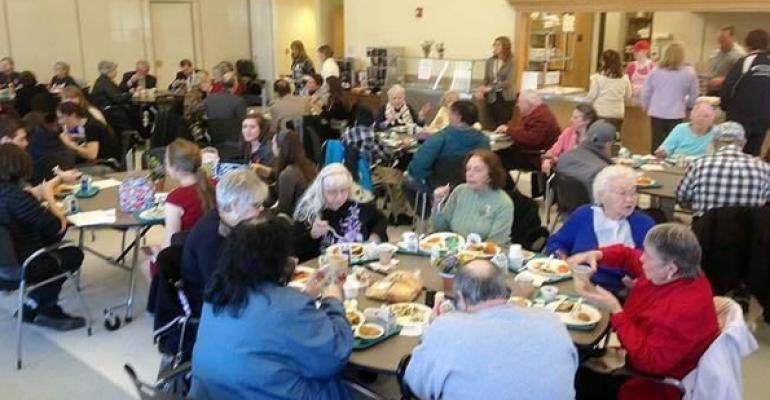 But the best part of the unique arrangement in Plymouth, MA is the connection that has come between the students and the seniors.

Plymouth Schools Foodservice Director Patrick Van Cott was already thinking about ways to take advantage of the joint new construction of Plymouth North High School and a senior center five years ago when the neighboring projects were still in the design phase. Now, two years after both facilities opened, Van Cott is not only cooking up meals for a district with 7,800 students, but also 40 extra dishes three days a week for the senior center next door.

The meals, which cost the students $2.75 a day, are offered at the senior center for a suggested donation of $2.50, although the meals meet all federal nutritional guidelines for feeding seniors and the center qualifies for some state reimbursement. The additional revenue for Van Cott helps him keep his operations completely self-sustaining.

With the new cafeteria next door to the center dubbed The Nook (the road it’s on) and Plymouth’s commissary kitchen a mile down the road, Van Cott’s department has quite an advantage over the contractor who was bringing in meals wrapped and reheated. After catering a couple functions for the center last year—the food received rave reviews—Plymouth started serving up hot lunch on Tuesdays, Wednesdays and Thursdays in January, while an outside contractor continues to provide meals on wheels Mondays and Fridays.

Van Cott says that since his staff and kitchen are already feeding about 4,000 people daily, an added 40 meals is easily absorbed into production. The seniors sometimes receive the exact same meals offered at the schools, but on days with items like chicken nuggets, the seniors get a reimagined Chicken Cordon Bleu.

The best part, beyond even the additional profits, is the intergenerational connection that has come from this unique arrangement. Students visit their elders on a regular basis with occasional special events during lunch, ranging from a small concert to an abbreviated production of the school play to sports captains visiting.

“It’s a natural partnership and the neatest part is the kids going over there,” Van Cott says. “It’s been absolutely amazing and incredible to see the kids sit and talk to the adults. They’ve got a million stories.”

After the school year, Van Cott and the Council of Aging will meet to discuss the possibility of providing meals there five days a week next year after the deal with the contractor expires.

Lunch participation at Plymouth Schools is 54% and 30% is free and reduced, says Van Cott, who’s been there 11 years.